Home  >  Blog  >  Concert in a phone box in Snape Maltings 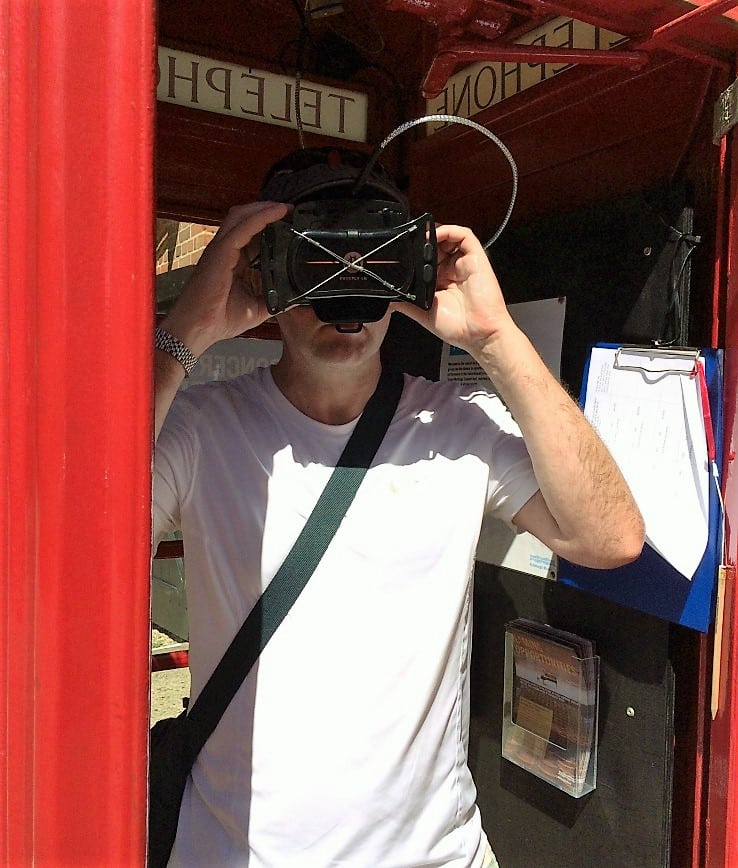 If you’re in Suffolk and can’t get tickets to see a production at the famous Snape Maltings Concert Hall near Aldeburgh, just pop into the local phone box for your own personal performance.

A fabulously bonkers idea, ‘concert in a phone box’ features the BBC Symphony Orchestra playing Frank Bridge’s The Sea. Goggles and headphones are provided inside the box so you can see the orchestra and auditorium from several angles whilst listening to the music. The camera was set up three feet above the head of the conductor, Martyn Brabbins, so phone box viewers have the best seat in the house.

Whilst I think this is an innovative idea to publicise the arts, it did make me nervous. My own memories of phone boxes are of malodorous, claustrophobic hell holes where you had to queue up, on a cold wet night, clutching an emergency 10p piece. I barely had the strength to open the door.

Thankfully, this phone box is a lot cleaner, though it was very warm when we visited last year and the door was still a struggle to open – but then I am puny. But it was brilliant, all thanks to the work of Matt Jolly. It was quite a feat involving a 360° camera rig made of 7 GoPros. Once the performance was recorded live, the task was even more complicated as each of the 7 memory cards had to be copied, creating a file size of nearly 300GB and hours of repetitive processing.

It’s a novel idea but I wonder, even if we all had the technical ability of Mr Jolly, is it likely to catch on? Will the dwindling number of old phone boxes be brought out of retirement, dusted down and transformed into entertainment booths, rather like the ones I used to use in record shops when I wanted to check out an album before buying it?  Should I buy one and have my own virtual reality concert hall?

I’m not sure I would want to be cooped up in a phone box for long though, without a comfy seat and a bucket of popcorn, so maybe short music videos would be the answer. I’m thinking ‘Hanging On The Telephone’ by Blondie or ‘I Just Called To Say I Love You’ by Lionel Ritchie. How about ‘Ring Ring’ by Abba or ‘Telephone Line’ by ELO? If we had to stick to classical music, why not Ringaletto by Verdi? (sorry, couldn’t resist that one!)

Remember ‘Sylvia’s Mother’ by Dr Hook? That would be a good earner for someone if you had to pay forty cents more at the end of every verse.

Is it possible they could play movies? I could star in my own version of Phone Booth, pretending to be Colin Farrell, held hostage in a telephone booth by a sniper. Or I could run around town from payphone to payphone wearing a grubby vest like Bruce Willis in Die Hard with a Vengeance. Of course this is all too macho for me. I think Dial M for Murder is more my style: blonde, dramatic and dressed up as Grace Kelly.

In the meantime, a visit to Snape Maltings is a must. I’m going to wait outside the phone box while someone is enjoying the performance then, just as it reaches a crescendo, I shall bang on the window, open the door and shout, “Are you going to be long?”