I can’t get enough of Aldeburgh. Every time we have a short break in Suffolk, we make a beeline for this glorious town on the coast. There’s a bit of a ritual involved, a route we follow as we explore. For a start, we always park at the far end of Aldeburgh, near the Martello Tower, and wonder what it would be like to stay there (it’s available for holiday stays from The Landmark Trust). 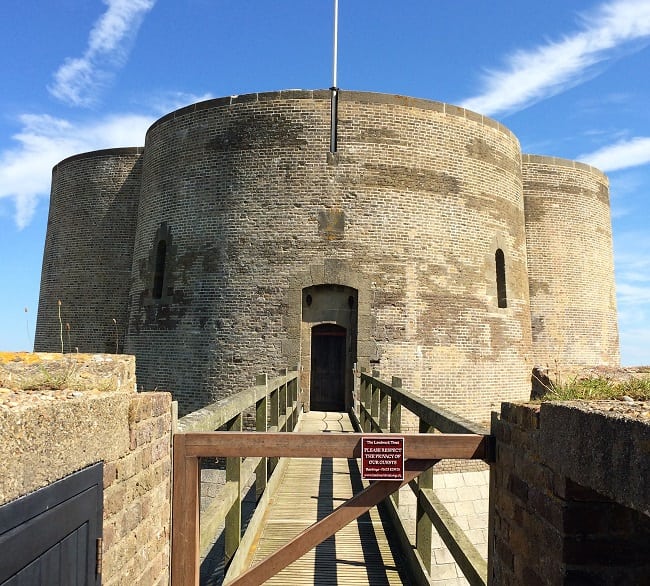 We then walk along Crag Path which follows the edge of the shingle beach. There are some colourful terraced houses here and a number of holiday cottages. 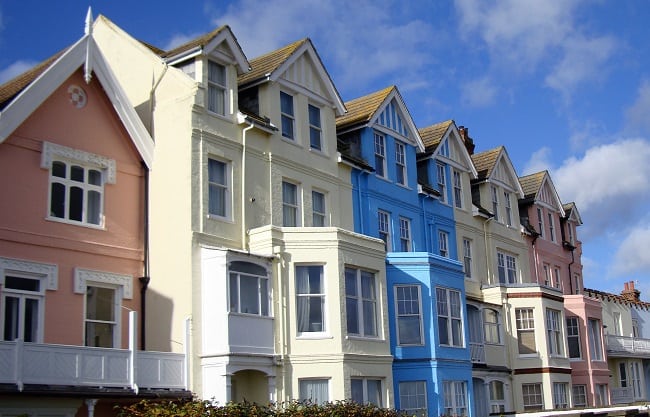 Once we’ve reached Maggi Hambling’s stunning sculpture, Scallop, on the beach at the north end of the town, we turn around and walk back to the car via the High Street. This bit often takes a while. I love shopping in Aldeburgh: lots of independent stores and excellent places to eat. 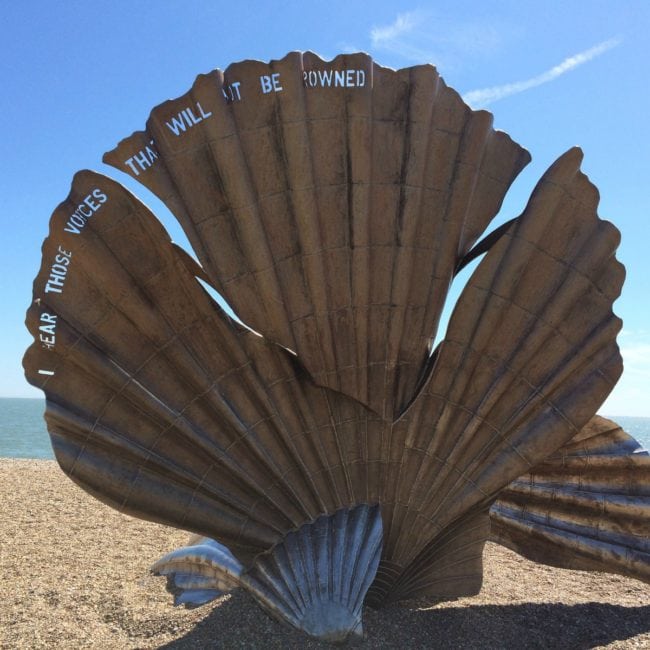 On this latest visit, in November, the town was quiet so we parked in the main street and set off on our usual route. We remembered how we had brought Rory here, late October 2012.  I had given my son the camera so he could snap things that interested him whilst I kept my cold hands in my pockets. I loved the series of quirky photos he took and thought I’d share them again. Despite the posters saying NO to Tesco, there is now a small Tesco Express in the town. 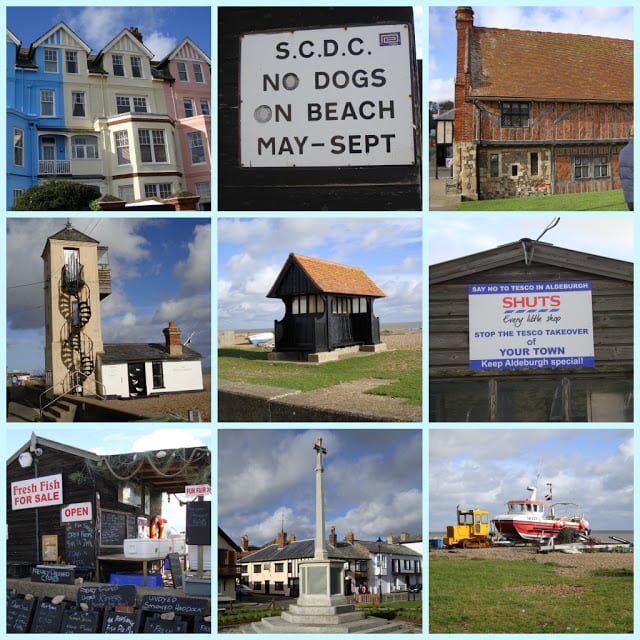 Even without my official photographer on hand, I can’t resist taking photos. I’m always drawn to the old fishing boats that can be found on the beach. Fundraising efforts from the local Fishing Boat Conservation Fund have ensured that these wooden clinker boats are preserved. They are dotted about on the shoreline, adding colour and shape to the vast expanse of sea and shingle. 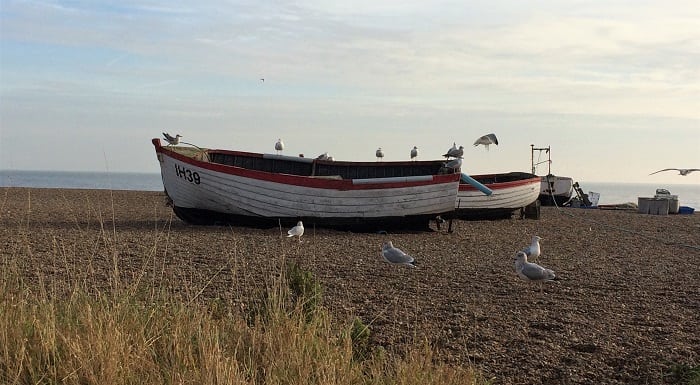 There’s also a Pebble Homage which you can find at the Aldeburgh Beach Lookout. Marker pens are provided for visitors to choose a stone and ‘think about life…write a short thought on your pebble.’ There are thousands of pebbles here with messages, dates and hearts. This art installation is regularly scattered along the beach, so individual stones can be found by future generations. I wonder where my stone is now, two years later? 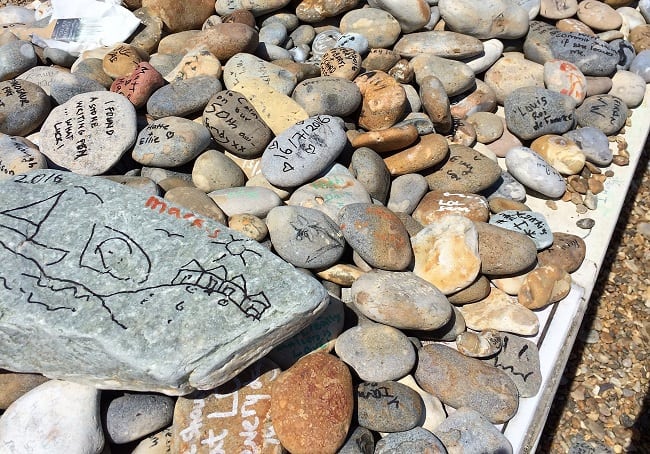 A little further on we spotted the statue of Snooks, dedicated to Dr Robin Acheson who was a GP in the town from 1931-1959. The doctor’s dog was well-known in Aldeburgh as it used to follow his master on his calls. When Dr Acheson died, his wife Nora carried on as GP and she is also remembered on the inscription. In 2003 the little statue was stolen so an exact replica was made to replace it, with the help of a large community fundraising effort. However, in July 2012, the stolen doggie was found by an antiques dealer. It was decided the original Snooks should be loaned to the local hospital, where it can now be found in the gardens. Why was he called Snooks? The family named him after a favourite food: tinned snook/snoek fish which was shipped from South Africa to England during WWII. 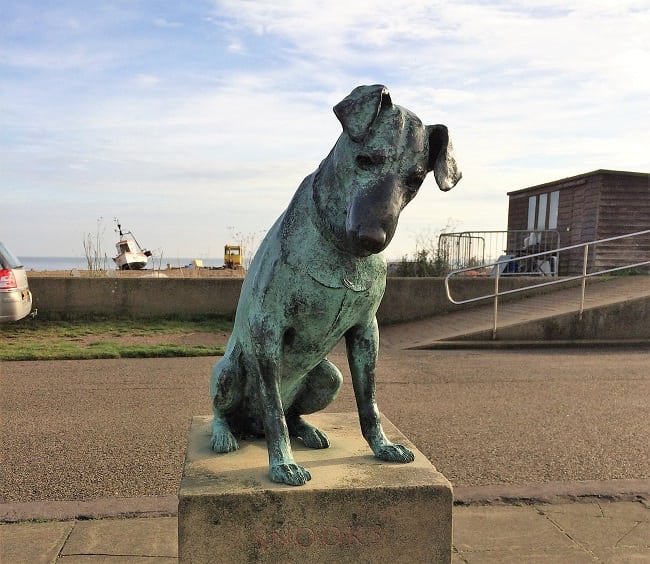 We always find something to buy when we visit Aldeburgh. I remember Rory, aged 16 at the time, being amazed that there was a Jack Wills shop here. This time, Dougie wandered into O&C Butchers but, I hasten to add, not for a couple of pork chops. This independent clothing retailer had some very smart shirts which caught my husband’s eye.

The town is also famous for Aldeburgh Fish and Chip shop which frequently has queues out the door. We fancied something a little less filling for a mid-morning snack, and came across the Cragg Sisters Tearoom. What a find! This beautiful little tea shop sells a myriad of black, green and white tea varieties plus some delicious home-made treats. I can highly recommend a warmed fruit scone with clotted cream and jam accompanied by an elderflower white tea.

Who were the Cragg Sisters? They set up their business in 1949, baking every day and giving leftovers to local children who used to hang around at the back door. One of these youngsters started working for the sisters and eventually inherited the business. It was, by all accounts, quite a chaotic but colourful set-up. 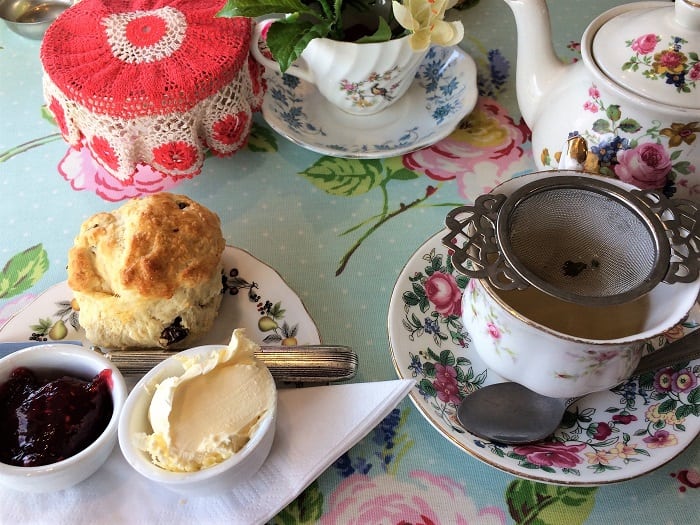 Local self-taught baker, Emma Neilson, took over in 2010 and revamped the shop. Importing quality teas from China, Emma has retained the tearoom’s vintage charm with its mismatched china and shelves of enamelled jugs and tea-cosies. We loved it so much we bought some loose-leaf tea to take home.

I don’t think I’ll ever tire of Aldeburgh. And yet, on previous trips, we have always stayed somewhere else in Suffolk and just popped over for the day. We could, like other visitors, find a hotel, B&B or self-catering accommodation. I would love to wake up in the morning to this view and have early morning walks along the beach. I’m sure we’ll be back soon, Aldeburgh, but next time, I think we’ll stay a while. 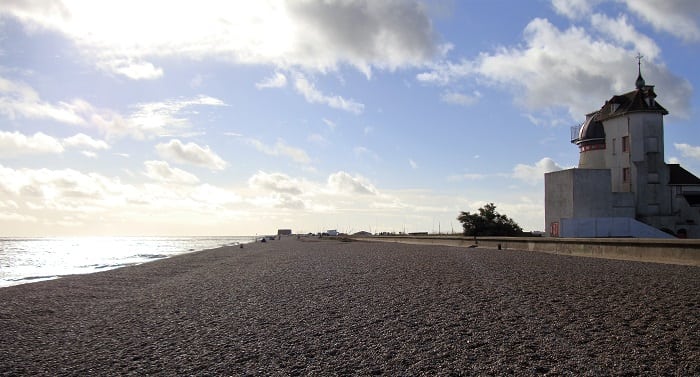