We’re in Snowdonia, should we try to climb Snowdon or not?

That was the big question we asked ourselves on this trip and it caused a huge amount of deliberation. For a start, as a group of four, we weren’t entirely kitted out in the right gear.

We did consider taking the mountain railway but this was deemed a cop-out and anyway, it was rather expensive and some of us weren’t keen on squeezing up close to strangers on a train. The ideal compromise would have been to walk up and take the train down (save on the knees) but this wasn’t possible as you can’t book just a return train journey.

In the end, poor old Snowdon was given the heave-ho and we opted for a walk around nearby Cwm Idwal. This would be an ideal test: if we could do this, we could maybe invest in decent walking gear and tackle Yr Wyddfa another day.

Whenever I plan trips I have a tendency to over-organise. I should know by now that it’s wise to follow one set of directions and one map. Instead I downloaded a route for Cwm Idwal from the National Trust website and another from the official Snowdonia National Park website. I was unaware that each walk was slightly different.

If I had looked at each map I would have known that, despite it saying ‘hard’ and ‘3 hours’ the National Trust advice showed an easy walk around the lake whereas the Snowdonia one showed a much steeper ascent away from the water. In hindsight I think the National Trust walks are graded to cover all types of walks in the whole country whereas the official Snowdonia routes are grading walks within, funnily enough, Snowdonia.

On the day itself I was oblivious to all of this. I was excited to be visiting Cwm Idwal as it brought back so many memories of geography field trips both at school and university. A cwm is the same as a corrie/hanging valley/cirque: a typical feature of glacial erosion. Scooped out by ice thousands of years ago, the cwm holds the beautiful Llyn Idwal, sitting very pretty and hidden from the main valley.

I do like to know about the history of a place as well as its geography so was quite touched by this tale about the valley. In the 12th century Owain, prince of Gwynedd, entrusted the care of his son, Idwal, to Nefydd Hardd. Bad decision as Nefydd was envious of clever Idwal (his own son was not so talented) and somehow, in his care, Idwal was drowned in the lake. Nefydd was banished and the lake named Idwal in memory of Owain’s son. It is said that no bird flies over the lake’s surface and that a wailing voice can be heard when there is a storm. I can’t say I noticed whether there were birds or not but there was definitely some wailing from a couple in our party when the route became a bit tricky.

Thankfully we chose a glorious day for our little trek – just the right amount of sunshine and shade, no rain, just a little breeze. Once we had started on our walk and the lake itself appeared to us, we knew we had made a great decision to come here as it was a stunning sight. 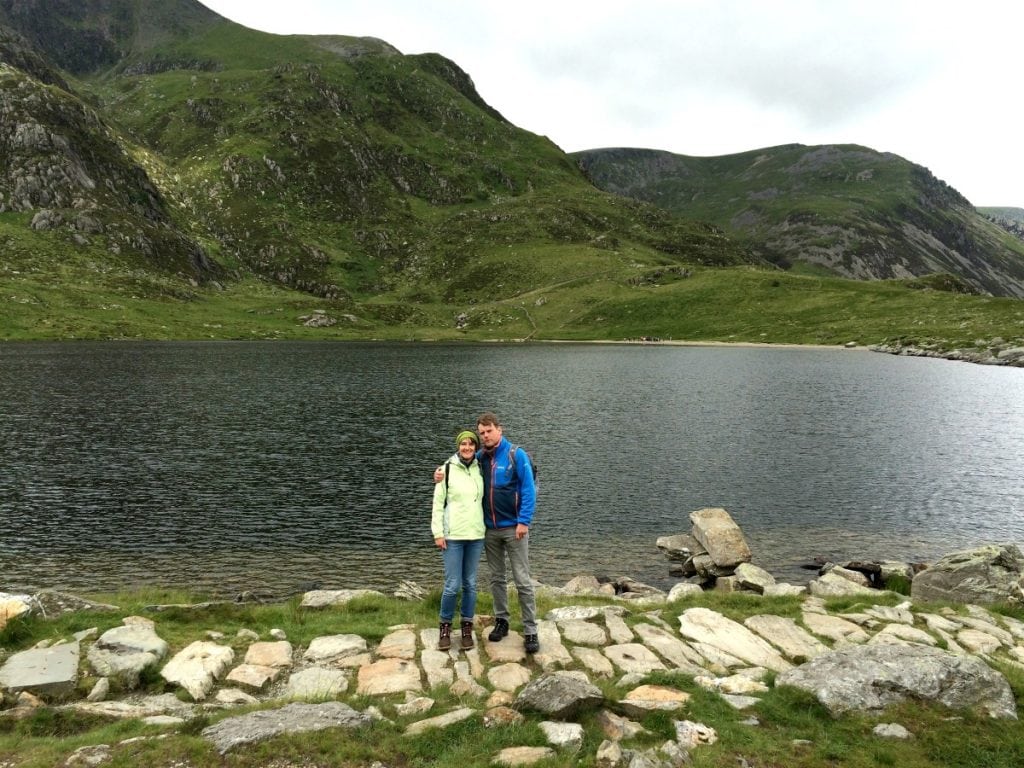 One of the walking notes suggested if we looked to the east towards the mountain of Tryfan, we would see a reclining facial image: Neolithic man, Indian chief with headdress or Homer Simpson? You decide. 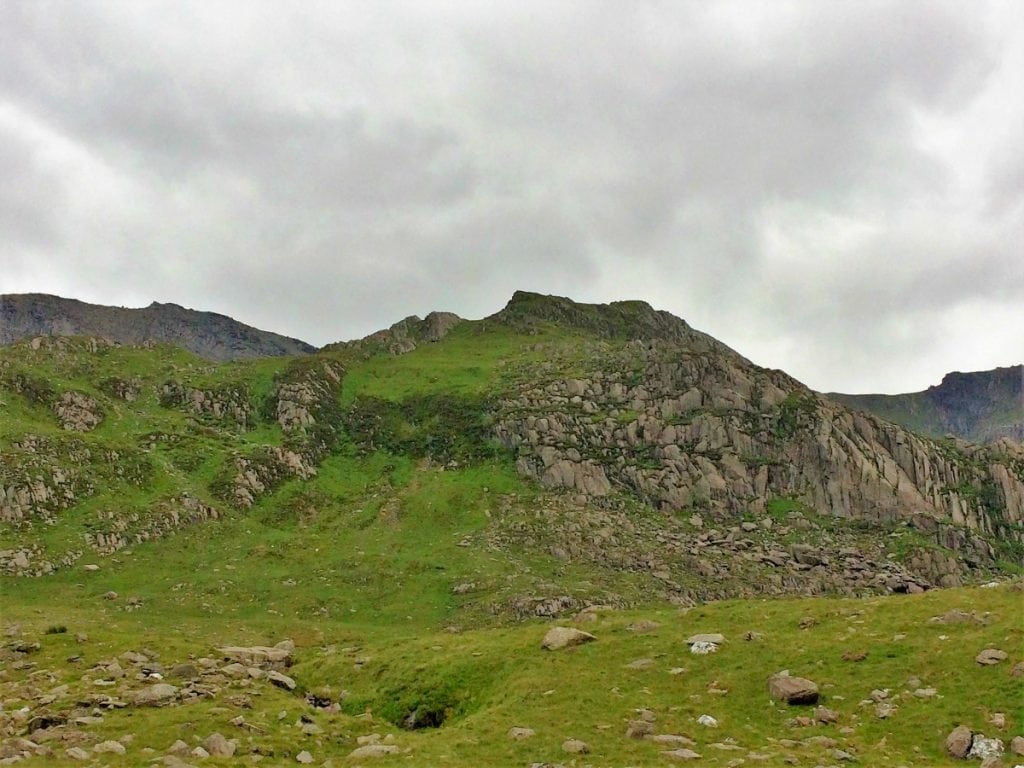 We spotted the Darwin Idwal boulders, noted by the great man himself during his field visit in 1842. We also admired the terrific Idwal Slabs, a training ground for many pioneering mountaineers including Edmund Hillary and his Welsh team mate Charles Evans. The slabs are named Rhiwiau Caws in Welsh which means ‘slopes of cheese’. I had visions of Wallace and Gromit clambering up them in the vain hope of finding a stash of Wensleydale at the top. 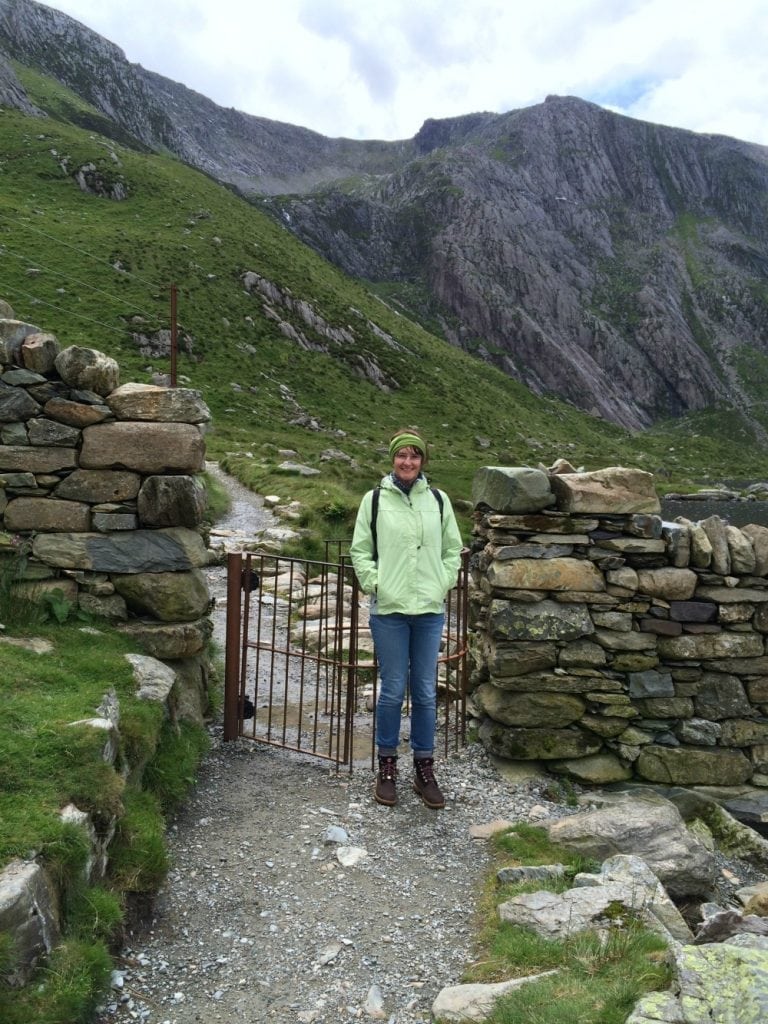 It was here the two walking routes parted company. The National Trust one told us to follow the path down right towards a level area. It did suggest there was an alternative high level route but it warned it ‘should only be attempted by competent hill-walkers as it involves very rough, steep ground and a difficult stream crossing’. As the Snowdonia one didn’t mention this choice, we carried on, unaware we had now classed ourselves ‘competent hill-walkers’ .

There was indeed a difficult stream crossing and I was tempted to turn round and go back until our son, Rory, surprised us all by taking charge and leading us further upstream to negotiate the crossing at a slightly easier junction.

Having reached the halfway point, we admired the spectacular view. We then noticed the lower path which we might well have taken if we had known what we were doing. I’m so glad we did persevere in order to see this extraordinary sight. 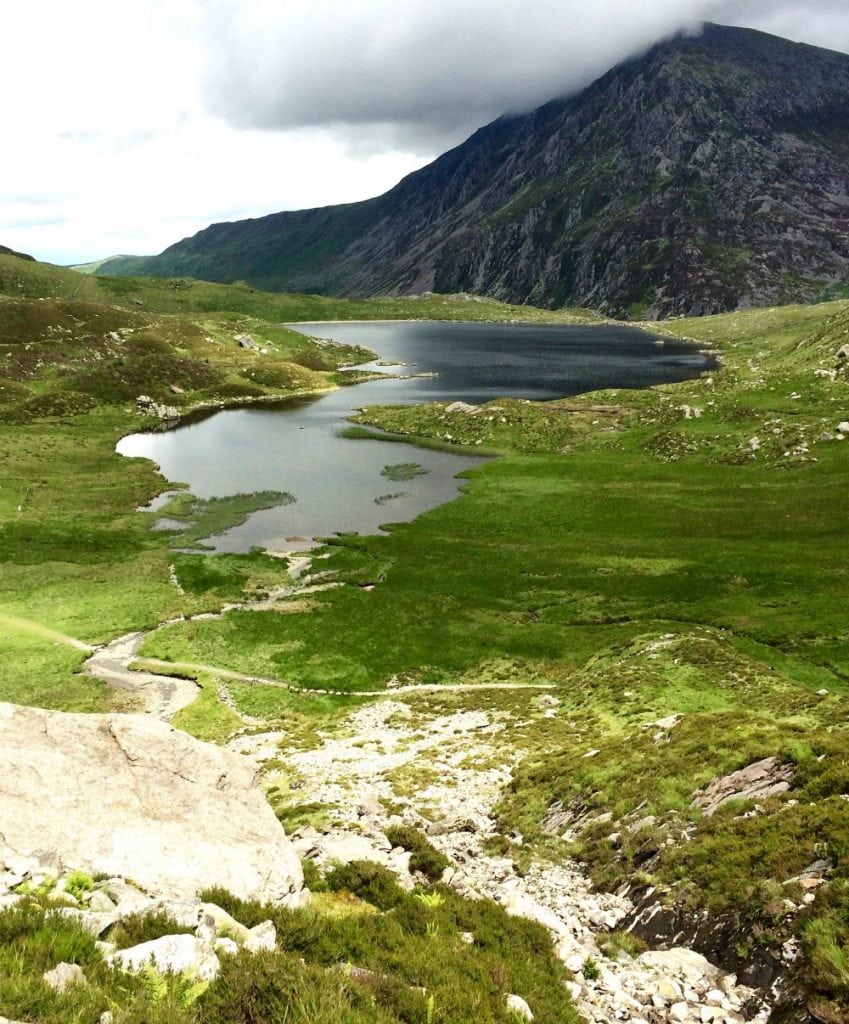 We headed back down via an area of large boulders which had been left there by the retreating glacier before eventually finding a series of steps which led us back to the lake, civilisation and our comfort zone. 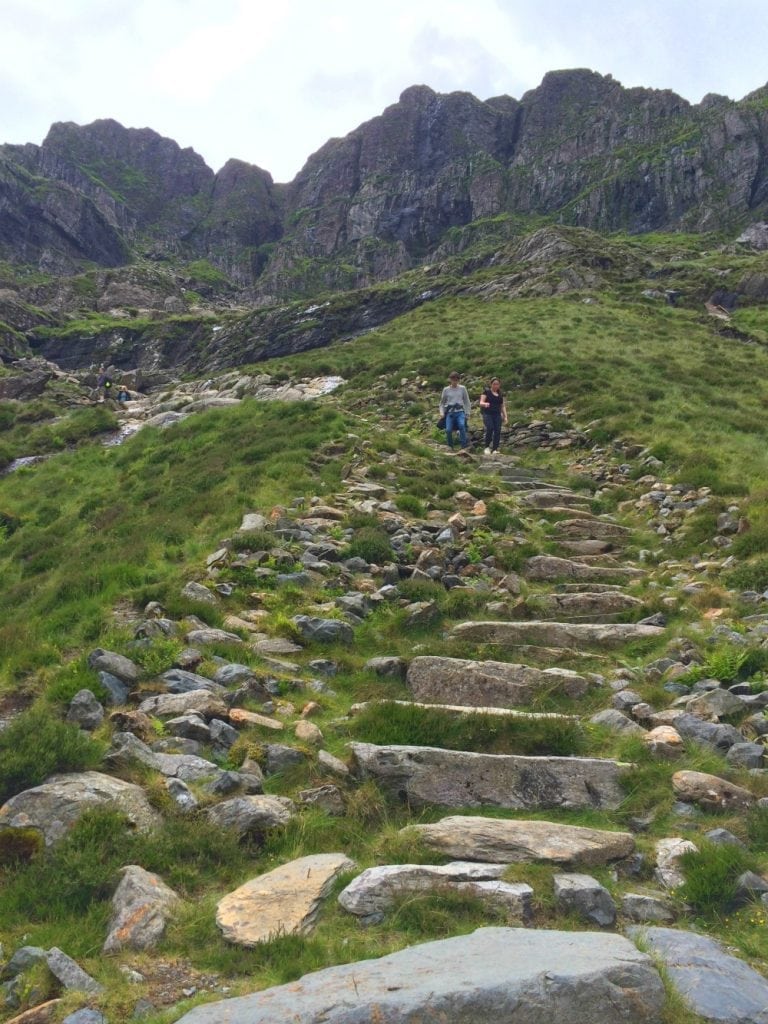 Like childbirth, I totally forgot the scary parts and basked in the afterglow of achievement. We found a place selling lamb and mint pasties at the visitors’ centre and ate them with gusto, telling ourselves that actually the walk had been a doddle.

Snowdon? Bring it on!

My other posts about our trip to Wales