Prior to our little holiday in North Wales, I thought we would be spending most of our time sightseeing in Snowdonia or pootling along the Welsh coast. I hadn’t anticipated that the island of Anglesey would be so close that two of our afternoons would be spent there. I say ‘afternoons’ as it was nearly impossible to get out of the apartment before lunch. Having two 20 years olds with us was lovely but it really was a case of herding cats for most of the holiday. Once herded, however, they were a joy and their energy boundless…well, until about teatime when they seemed to need a nap.

Our apartment in Caernarfon was just a few minutes’ drive from the Britannia Bridge across the Menai Strait. We soon discovered that Anglesey’s landscape was another world from Snowdonia: it’s remarkably flat, which I would have realised if I’d paid more attention to the map.  Places of interest there are very accessible because of the duelled A55 which shoots straight across the island to Holyhead to make things easy for ferry-goers, plus there’s a decent A road circling the coast.

We had given our son, Rory, the choice of what to do that day therefore, on his instructions,  we drove towards the ferry terminal, turning left at the last moment to arrive at South Stack, a tiny island off the western most tip of Anglesey. South Stack is known for two things: it’s an RSPB reserve and it houses a spectacular lighthouse. 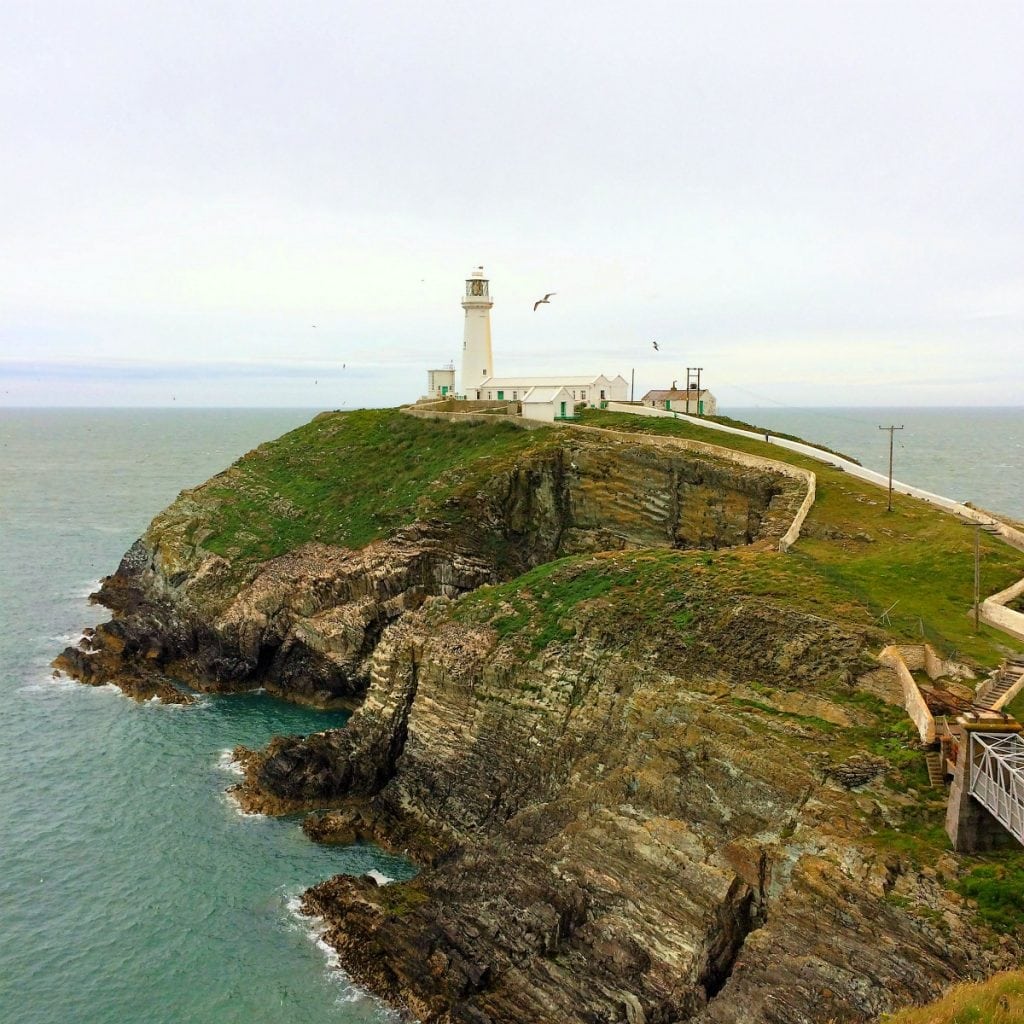 We do have a habit of visiting RSPB reserves when it’s blowing a hooley. We were buffeted at the RSPB centre at Bempton Cliffs on the Yorkshire coast a couple of years ago and the weather was just as punishing off the coast of Anglesey. Undaunted we walked down the 400 stone steps, peering over the cliffs every so often to spot puffins, guillemots and razorbills. Deciding to pay an entrance fee for a tour of the lighthouse, we crossed the little bridge onto South Stack, just in time for the next tour and a breathless ascent up to the top. It was fascinating to hear the history of the lighthouse and learn how previous lighthouse-keepers, pre-1828, had to cross in a basket suspended from a cable. Doesn’t bear thinking about and yet I did think about it and had to gasp. This was July and the wind was ferocious: imagine what it would be like during winter storms. 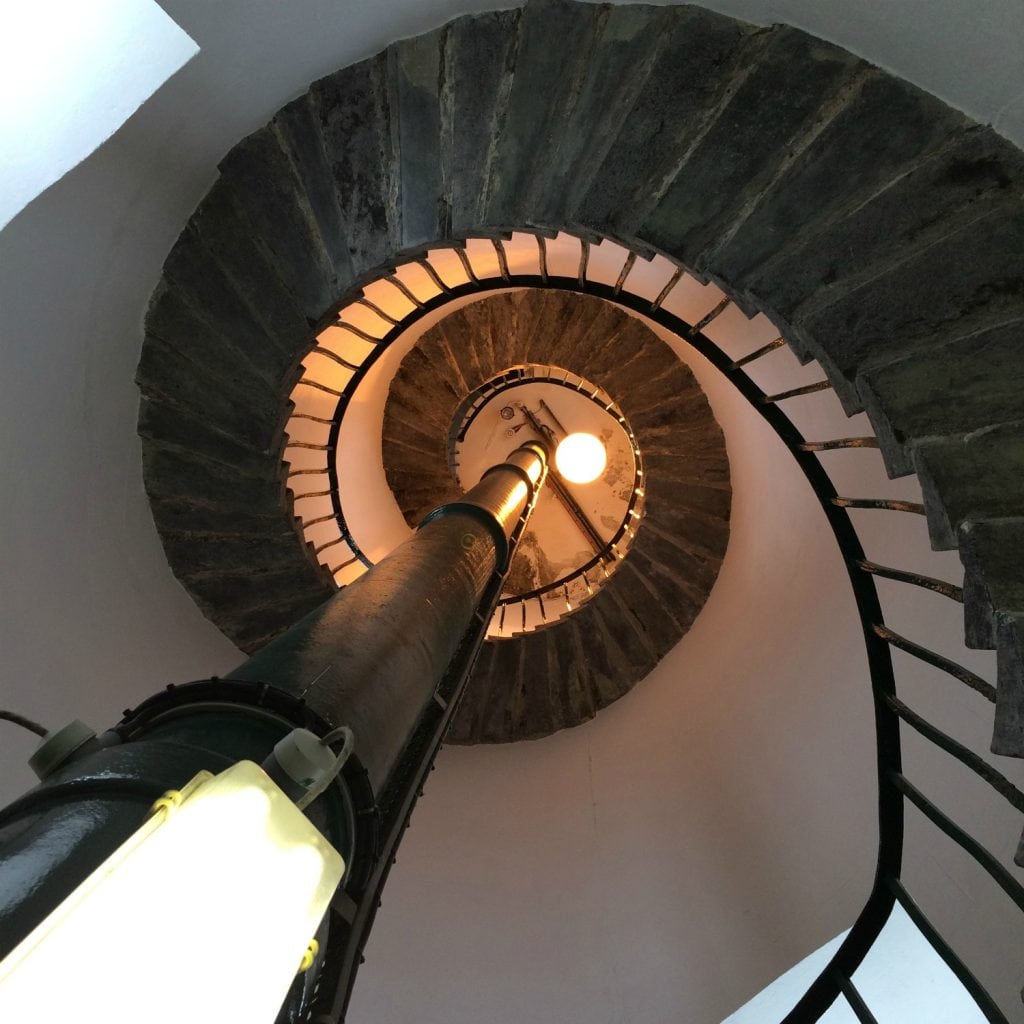 Of course, what goes down, must go up – or something like that. To return to the RSPB centre, café and car necessitated walking back up the 400 steps, trying to avoid being dive-bombed by protective birdy mums and dads. It was definitely a good cardio workout and I took my hat off to the tour guide who has to do this on a regular basis; that is, if I’d been wearing a hat, which, of course, I wasn’t as it would have been halfway to Ireland within the blink of an eye.

On our drive back to Caernarfon we stopped off at the famous village which sports the longest name in Europe: Llanfair­pwllgwyngyll­gogery­chwyrn­drobwll­llan­tysilio­gogo­goch. I proudly boasted to the family that I had been able to pronounce this, from memory, as a child. It was only when I looked at the station sign that I realised I had been saying it wrong for nigh on forty years. 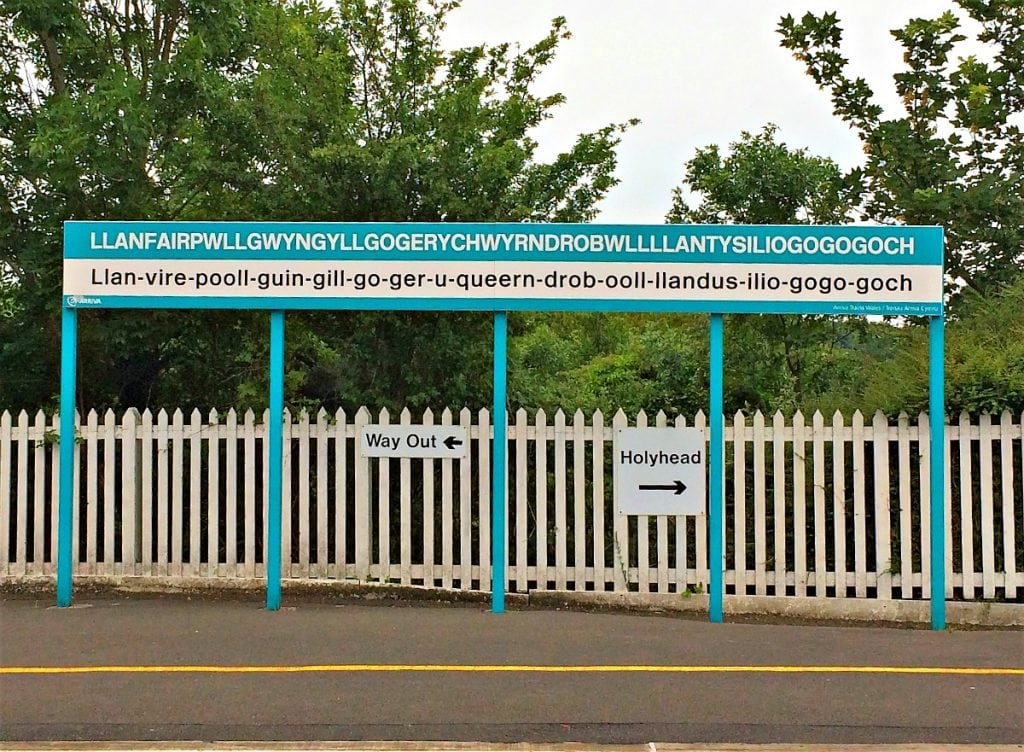 The following day we returned to Anglesey as it was the turn of Rory’s girlfriend, Juliana, to decide where we would be going. The weather was pretty grim east of Caernarfon, so she cleverly found an interesting place to go in the only part of north Wales which looked as if it might not rain. So, a little after midday, we headed back over the Menai Strait and drove to the curiously-named Copper Kingdom.

Copper Kingdom refers to an area of Anglesey around the port of Amlwch (pronounced, probably not particularly accurately, as Am-luck). Copper was mined at nearby Parys mountain before being processed in Amlwch and shipped all over the world. At its height, in the 1780s, two mines in this tiny part of a small island off the north coast of Wales, dominated the world’s markets. The copper was used to protect the hulls of the admiralty’s ships from the dreaded Teredo seaworm and inhibited marine growth which could make ships less manoeuvrable. It’s said that Nelson’s success at Trafalgar was partly due to his fleet being speedier because of the Amlwch copper sheathing.

The best way to appreciate Copper Kingdom is firstly to visit the small but excellent heritage centre in the port. Once armed with the fascinating facts and figures, pop over the road to the Sail Loft with its super little café (try the Welsh cakes) and museum dedicated to the port’s maritime history. Full of knowledge and Welsh cakes, drive to Parys Mountain and follow the trails around the old mine to see all the history you have learned come to life.

Or you could, like we did, do the tour the opposite way round…

Nevertheless, despite our topsy-turvy sightseeing methods, Parys mountain was a delight. Near enough deserted, we followed the trail across this eerie mine which used to be teeming with workers and is now weirdly silent. The colour of the rocks is quite extraordinary: a red-yellow-brown combination due mainly to the oxidised sulphide deposits. The huge craters make the landscape appear part lunar/part Mad Max. Despite the land having been treated so brutally by industry, there was a surprising beauty about the place, especially when bright batches of heather and lichens, flourishing in this acidic environment, burst through the rocks in many places. 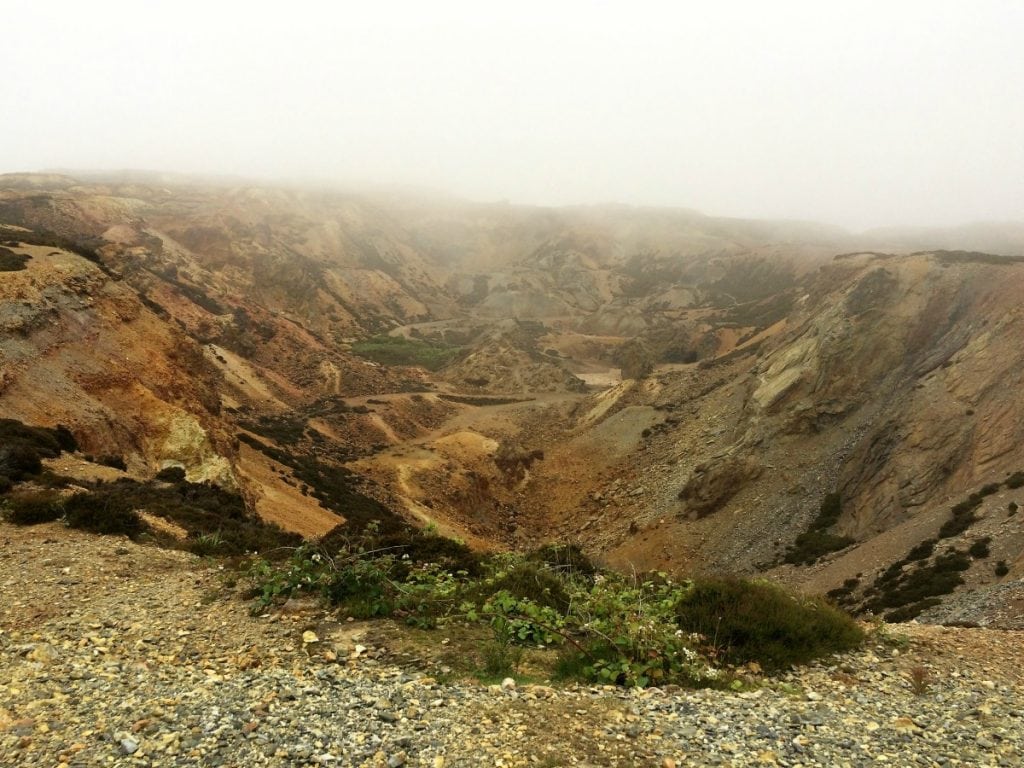 Copper Kingdom deserves to be more widely known as it’s such a significant part of our industrial heritage. There’s also evidence of excavations dating back nearly four thousand years, to the Bronze Age, meaning that this site is as much an archaeological site as it is a place of historic importance.

Juliana bought herself a little copper ring as a memento of her trip to Amlwch. She also earned the family’s gratitude for picking out this adventure which was the unexpected highlight of the week.

The cost to visit the South Stack lighthouse is £5.50 for adults (£4 concessions including students, £3 for children). Check website for opening times.

Previous posts about our trip to Wales: