I have always struggled with the pronunciation of Scottish place names. Dougie hoots with laughter when I read names from the map phonetically. Who knew that Milngavie is pronounced ‘mil-guy’ rather than ‘mill-un-gav-ee’? Likewise the lovely town of Kirkcudbright which I once stumbled over. It’s pronounced ‘kirr-koo-bree’ not ‘kirr-cud-bright’.

Since that gaffe some years ago, I’ve always wanted to visit the town. I fancied going into a shop and asking if they had any kircoobree postcards. Oh how the assistant would be impressed with my knowledge of the vernacular.

Kirkcudbright was only a short drive from our first hotel in Balcary Bay. We hadn’t realised on our first night there had been a festival in town with fireworks and a parade. I was disappointed but hoped there would still be a jolly mood there the following day. We were feeling very chipper as we had just completed a walk around the Balcary Bay headland, fighting off starvation and raging bulls in a pair of Bear Grylls trousers. You can read about that fun morning in the column I wrote for the Lincolnshire Free Press.

On our drive into town we passed the village of Dundrennan  which is famous for two things: its very pretty Abbey ruins and being the home of the Wickerman music festival. The festival was created in 2001, capitalising on the number of nearby locations from the cult 1973 film, The Wicker Man. It sounds like a great event, a mini-Glastonbury, and each year they burn a 35ft wicker man at the close of the weekend. The 2016 festival was unfortunately cancelled so a rather forlorn straw giant stands in a field near the village. Thankfully some sheep have taken to nuzzling him to keep him company. Unfortunately, if they keep going at this rate, they’ll have his leg off. 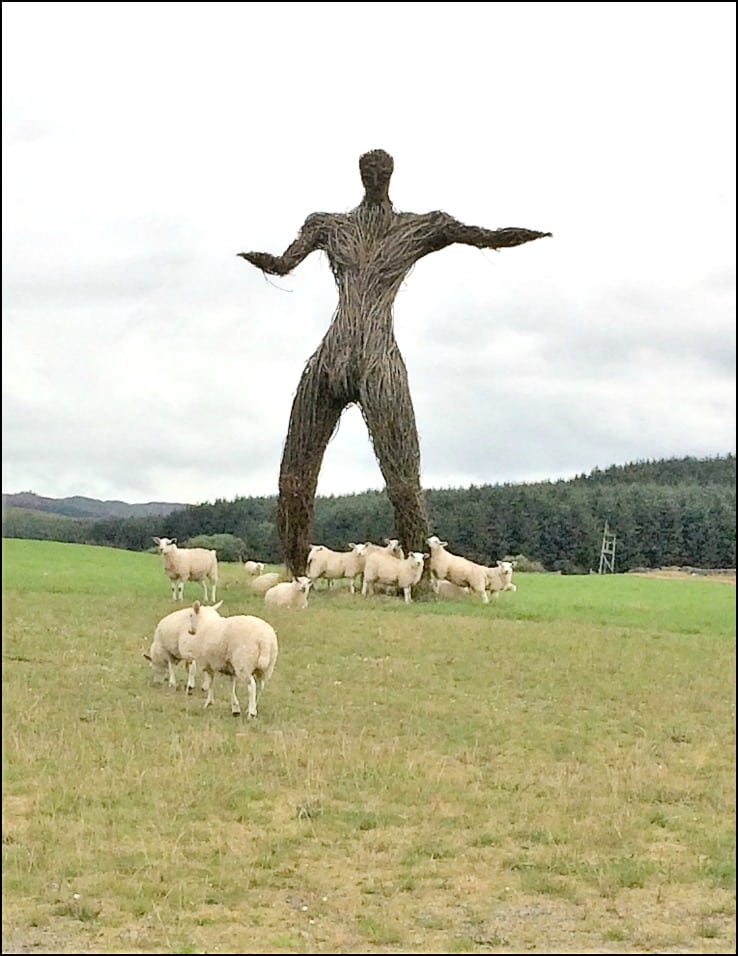 The roads leading to Kirkcudbright were very quiet but once we reached the town we discovered where everyone was hiding. There was a Farmers’ Market in the town and it was obviously a huge draw, as there were queues for many stalls. Dougie had been thinking fondly about Scotch Pies and there was a chap here selling hundreds of them. I was tempted by the soup and happily guzzled a large mug of spicy carrot and something or other. There was a piper in the town centre, plus a huge classic car rally. Kirkcudbright even had two miniature Kelpies. Far smaller than the originals in Falkirk, these mini-Kelpies were touring the country and we happened to be in town during their brief visit. 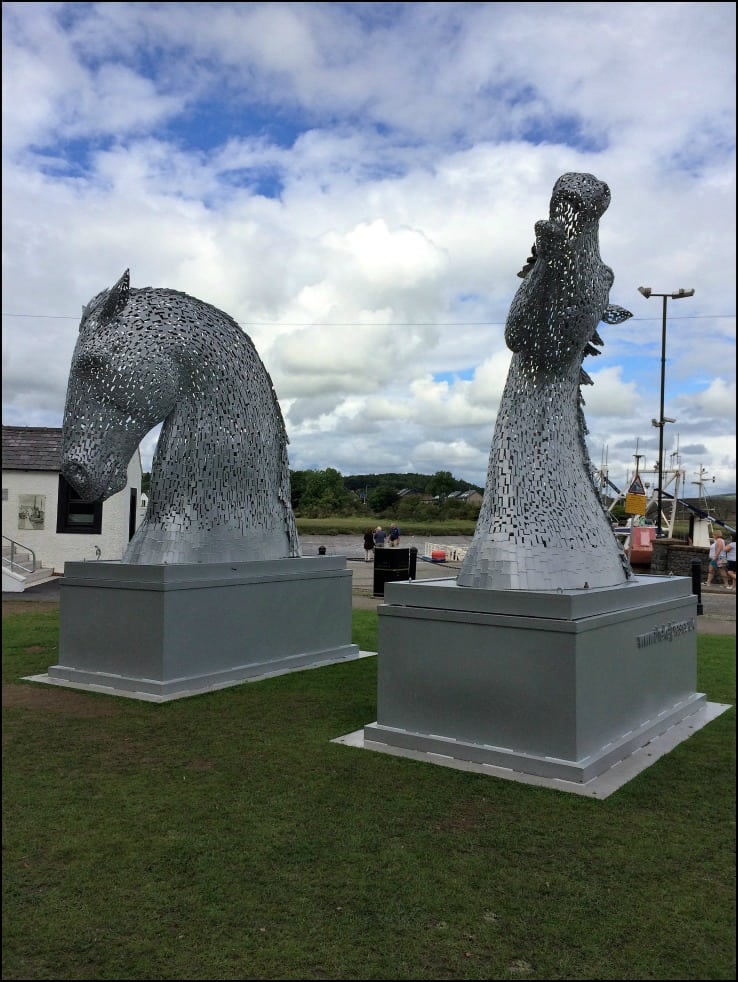 The meaning of the name Kirkcudbright is the ‘church of Cuthbert’. He was the patron saint of Northumbria at a time when this part of Scotland was part of the Kingdom of Northumbria. Dougie had picked up a kirkyard (churchyard) trail from the tourist office and thought it would be a good way to explore the town. The route took us along the river bank, past the sluice gates which controlled the water for the Old Corn Mill and up to the kirkyard itself.  Once there, we were directed towards the recently restored headstone to Billy Marshall, the ‘Gypsy King’, who apparently died in 1792 at the age of 120… 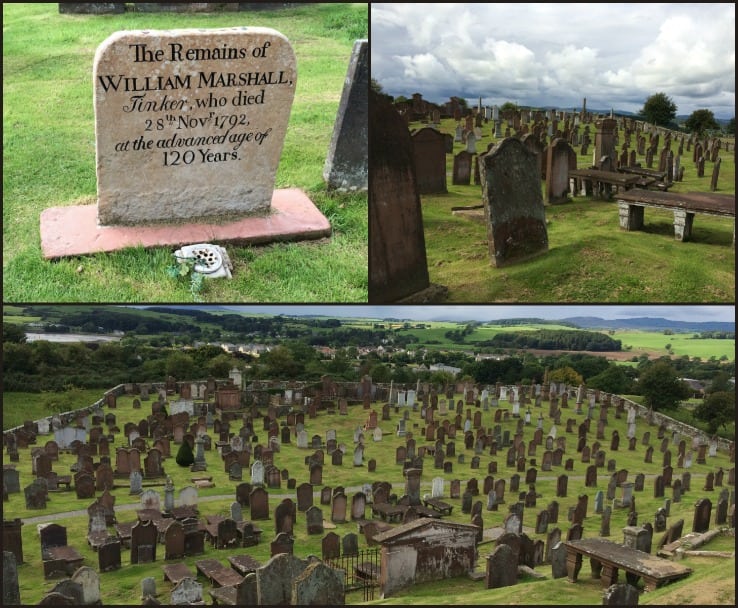 We managed the walk in an hour or so, no thanks to the leaflet which I have to say was not easy to follow. This may well be our fault as we have often come a cropper following directions for hiking trails. Remember the mess we found ourselves in during our walk in Snowdonia? At one point the leaflet said, “now retrace your steps to the main path and make your way up to the view point on the bank overlooking the older part of the kirkyard.” We dutifully returned to the path but, unable to see where the viewpoint was, decided to just scramble up the hill through the gravestones until it became too steep and we turned back.

I then read out the next sentence from the guide and wondered why the person writing it hadn’t just said this in the first place: “Go out through the gate but turn immediately left toward the kirkyard store. Turn left here to mount the steps up to the viewpoint.” Steps? There were steps?

There was a wood to negotiate and a few muddy bits but it was actually a very interesting trail and we were the only ones on it, everyone else was stuffing themselves with pies back in the town centre.

Kirkcudbright is known as the Artists’ Town as it has been a focus for artists since the 1880s. One of the original exhibiting group, E A Hornel, became famous as one of the ‘Glasgow Boys’, influential artists of that era. Hornel’s home, Broughton House, is owned by the National Trust of Scotland. It’s well worth a visit as it is a well-preserved building and its gardens are beautiful. Visitors can see how he lived and in his studio  you can appreciate the design of the skylights with blinds to adjust the amount of light and shadow whilst he was painting.

We also popped into the Tolbooth Art Centre which had a number of contemporary exhibitions and a very handy loo. There are a number of other galleries in the town plus several pretty side streets with flower boxes and pastel-coloured exterior walls. It really is an attractive town with its river, handsome bridge and collection of independent shops.

Before leaving, we stopped off for a drink at the Selkirk Arms Hotel. It’s famous as the place where Robert Burns penned his Selkirk Grace which has since been quoted all over the world at many a Burns Supper. The wording of the Grace has been carved rather oddly, in a very blunt font, into a wooden plaque. I thought it was very difficult to read, though I had just downed a welcome glass of cider. How different from Burns’ original scribblings at Scotland’s oldest hotel, the Kenmore, in Perthshire. His words are etched into the walls of the chimney breast and protected by a small piece of glass. 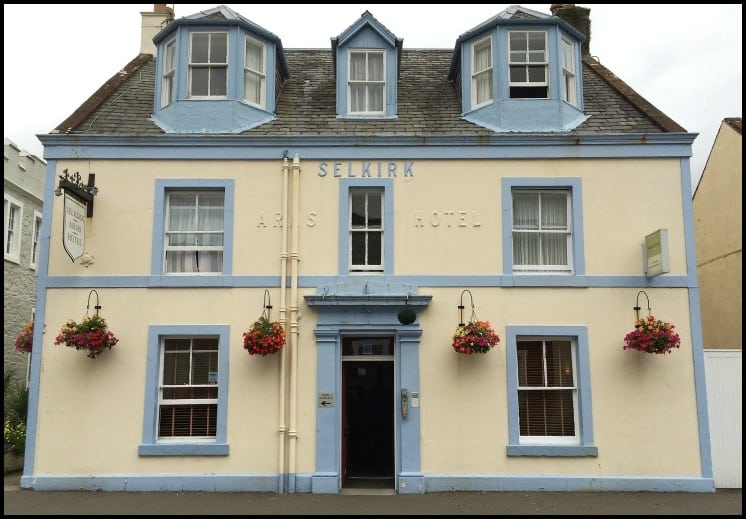 That night, back at the hotel, Dougie reminded me of the Selkirk Grace and quietly uttered Burns’ words before we tucked into our meal: 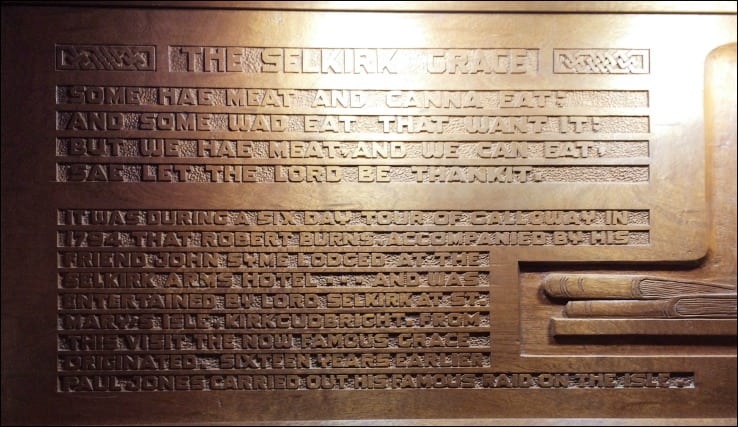 We were given complimentary tickets for Broughton House by the Association of Scottish Visitor Attractions (ASVA) via Visit Scotland. Entry to the house and gardens is normally £6.50 for adults and £5 concessions, free if you are a member of the National Trust for Scotland.