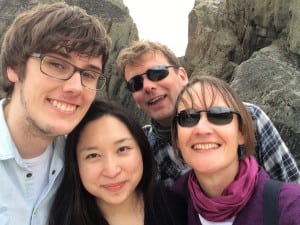 There was something very Enid Blyton about our recent trip to Devon, starting with the beautiful accommodation, Tamarisk Beach House. I was so delighted with the house, I penned a few words for the Unique Home Stays website, hopefully capturing that magical Famous Five feeling: Four go to Woolacombe

From our holiday home we could see Baggy Point, the wonderfully named headland at the southern end of Woolacombe Bay. We were all keen to explore it but, in hindsight, should have gone on foot across the dunes. But, as my article for the Lincolnshire Free Press shows only too well, when Dougie and I had tried before to stick to the proper route of the famous South West Coast Path, this hadn’t gone quite as planned.

Everyone knows some of the roads in the south west can be a little narrow but this journey was made all the more difficult because we had failed to spot the sign pointing to a diversion because of a road closure. Hence, we came to a dead end at Georgeham, only to turn round in a car park and have to find a more circuitous, narrower route to our destination: the National Trust car park at Croyde.

It was just as well Dougie was driving as I seem to have developed a worrying inability to judge car widths over recent years. Nevertheless I’m sure my breathing in as we squeezed past cars coming in the other direction made all the difference.  In years gone by, we would have driven a clapped-out jalopy, happily pulling into passing places and putting up with the odd scratch to the paintwork. Now we have joined the ranks of those annoying urban folk in their lah-di dah 4x4s, trying to inch past other drivers, similarly cocooned, whining that the alloys might get damaged and being unable to think straight as the sensors keep bleeping with every tumbling gorse bush.

Thankfully we reached the start of the ‘easy short circular walk’ without losing a wing mirror and began our hike. I had told everyone to wear plenty of layers as we would be going out to the very end of Baggy Point but the weather proved to be ridiculously warm and we began disrobing with every step. Even the Buffs came off…

We passed some whale bones from an unfortunate creature which had washed up on Croyde beach in 1915. The Hyde family, who gave Baggy point to the National Trust in 1939, had kindly preserved them for visitors. I reckon it was either a very small whale or they’d mislaid some bones along the way. 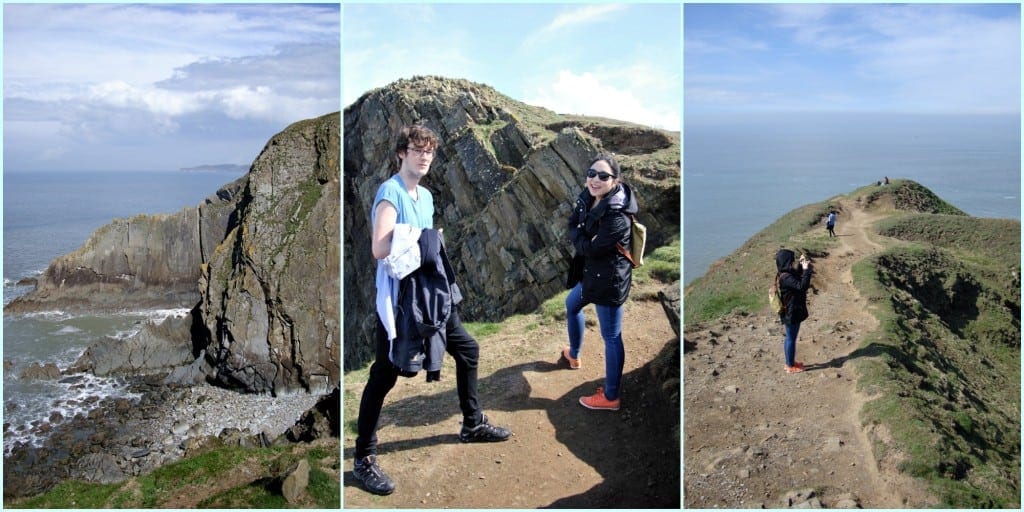 The scenery was breathtaking, thanks to the glorious weather, and we could clearly see Lundy Island in the distance. We sat for a while just soaking up the sun and listening to the waves crash against the rocks below us as the sea-birds wheeled above our heads. 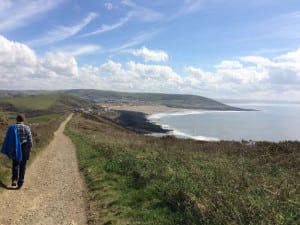 The route back was well-marked, taking us via a memorial stone to Henry Williamson, author of Tarka the Otter, which was written when he was living nearby in Georgeham.

One of our better decisions of the day was to pop into the Sandleigh Tea Room on our return to the car. A gorgeous place, with pretty gardens and community allotments, it served up delicious lemonade and freshly-pressed apple juice that our famous four felt they had justifiably earned after their adventure.

From Croyde we drove happily on a much wider road to Braunton to try out award-winning Squires Fish and Chip Restaurant. As a family we are very keen to test ‘award-winning’ chippies. In Bridlington we fell in love with Sewerby Fisheries and in Seahouses we gave the gong to Pinnacles Restaurant.

I’m always swayed by a celebrity champion. Hence, when the Hairy Bikers claimed Pinnacles had the best fish and chips in the country, I was always going to be persuaded.

Squires also has its famous fans. Former Prime Minister, John Major, came with his wife Norma and declared ‘Fish and chips is one of my favourite meals and yours was the best I have ever eaten. Your kind hospitality and generous portions will be remembered for a long time.’ That’s some praise.

Even fellow fish restaurateur, Rick Stein, commended the ‘very light batter covering a thick fillet of very fresh fish and the chips were thick and floury on the inside and beautifully crisp on the outside”.

So, who wins? Hairy Bikers or Rick Stein?

The fish batter was beautifully light and crisp in Squires and we had a delicious meal. I think, however, and only by a chip’s breadth, my vote would go to Sewerby Fisheries but maybe because we ate them from their thick paper wrapping, looking out to sea, rather than inside a restaurant looking out onto the busy traffic of the A361.

Juliana, however, our designated foodie connoisseur, gave her vote to Pinnacles.

Which just goes to show that either we all have different requirements for the perfect fish & chips or Camilla Dallerup hasn’t been to Seahouses.