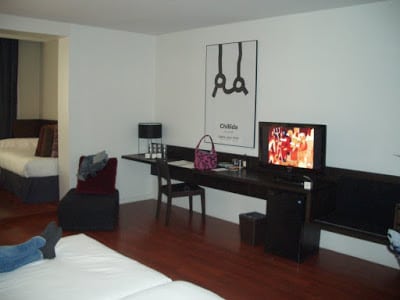 Funky room, courtesy of my mate Jose. Strange poster on wall….a bra?…pair of glasses?
There’s something rather odd about getting up at three in the morning to go on holiday; piling cases into the boot of the car and driving swiftly off as if you’re doing a runner after a big heist. The best bit is the total lack of traffic on the roads so we get to Stansted in no time at all. The Easyjet desks are, thankfully, interchangeable, though this creates stress in our family as we inevitably pick the wrong line, watching as the others move more quickly than ours. My husband is like an excited meerkat, eagerly looking around before dragging us to another queue. Unfortunately we join a line where the chap in front of us is a lonely crackpot, eager for some company. Hell’s teeth, it’s five in the morning!! I don’t want to be seen by anyone, let alone get into conversation with a man who buys and sells locomotives!! Why isn’t he travelling on one instead of boring the hind legs off me?! So we suffer his advice on where to go in Barcelona, how many stamps he has on his passport, the pros and cons of every European airport, blah blah blah zzzzzzzzzzzzzzzzzzzzzzzz! Thank heavens the queue moves fairly speedily, he waves goodbye and we punch the air as he’s going to Copenhagen….Wonderful!

The necessary but frustrating indignities of the security checks are next up: jackets off, belts removed, everything placed in the little plastic tray whilst you hang onto your trousers to stop them falling down. Some people are completely witless though, watching their fellow travellers removing clothes but not anticipating they might have to do the same. So whereas this could be a very smooth procedure it is a complete mess, with the brainless people suddenly having to take belts off at the last second and therefore holding the rest of us up! The security bods then have to explain the rules about no liquids on planes, so bottles of juice and water have to be surgically removed from the grasp of these affronted passengers who then kick up a fuss because someone has the audacity to frisk them.

A Starbucks caffeine and croissant fix is necessary before we head to the boarding gate which is somewhere a million miles away. It seems the flight is delayed due to a faulty plane but amazingly Easyjet manage to secure another plane from a company called Titan Airways (Titan…..Titanic…..hmmmm!) and the delay is only half an hour. In the short wait we have a good session of people watching. This time we play a game of Creature Comforts; deciding which animal best represents our fellow passengers. Two chaps are sitting opposite and we decide they are a walrus and a little yappy dog. Walrus man unintentionally keeps us amused with his unwillingness to find anything interesting in yappy dog’s conversation, preferring to sit with his big gut over his trousers (I wonder what happened when he had to remove his belt?) deciding where he fancied eating tonight.

On the plane we are told by the very nice Titan Airways captain that he had been woken at 7am to be told he was needed for this flight. It is now 8am so I am very impressed by his speed at getting here, though somewhat concerned that he might have been on the bottle last night, anticipating a free day. Like most passengers, as soon as we take our seats we belt up. But we are soon advised that because the plane is refuelling we have to unfasten our belts! Hubby insists the attendant must have said “and fasten” and it seems others think the same. So there is an awful lot of clunking and clicking in the cabin until the attendants come down the aisle and tell everyone to unfasten their belts. Just as she reaches the back of the plane and we are all unfastened, the “fasten seat belt” sign lights up so we all re-fasten our belts! What’s that all about?

Touch down in Barcelona and a quick taxi ride to Hotel Regina. Now this is where I have boxed clever. I found this hotel on the Tripadvisor website and was impressed that the General Manager of the hotel, Snr Jose Sanchez-Harguindey, always replies to visitors’ comments on the website, thanking people for their compliments and assuring people with complaints that he would look into them. I emailed him a few weeks prior to our trip, telling him I was impressed with his customer service and informing him we had booked with his hotel having consulted Tripadvisor. So I shouldn’t really be surprised when, having keyed our details into the computer, the reception chap suddenly breaks into a cheesy smile, bustles away into the office and brings forth a young woman who greets me like a long-lost friend.
“Meeseez Burrrgezz, how are yooo?” she enthuses.

She is sorry but the manager is in a meeting but he is looking forward to meeting me. I could see my hubby trying not to laugh as all the staff are hovering round me as if I am royalty or “flies round s***” as my husband so politely puts it. As we are led to our superior family suite hubby is muttering that he wonders what else I have offered old Jose to obtain a good room, in addition to dangling a “good review” carrot! Room proves to be very spacious and chic, on the top floor as requested, huge bed, wooden floors, flat screen TV and the best quality cotton sheets I’ve ever seen; Jose has done us proud! Hubby now happy for me to do whatever it takes to keep up this level of service!
Spend the rest of the afternoon ambling round the town and end up at the Museum of Contemporary Art where we look at some bizarre paintings, sculptures and, what do they call them? Oh yes, installations! A lot of old Jackson Pollocks if you ask me! 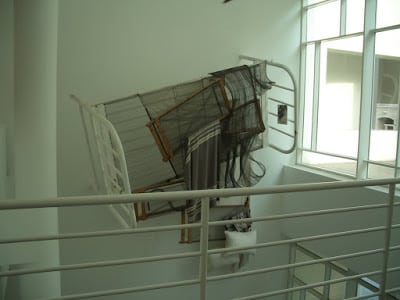