Ängelholm hadn’t been my first choice when choosing a stop on our Swedish fly-drive. I’d rather fancied staying in Båstad, the tennis capital of Sweden, where the Open is played in early July. Truth be told, it wasn’t the tennis that attracted me; more the endless fun I could have, if people had asked me where we were going on holiday, to shout ‘Båstad!” in a demented Father Jack bark. It’s actually pronounced ‘bow-sta’ but why spoil a good wheeze. Both Båstad and Ängelholm are towns in the very north of the ancient province of Skåne, which I have now discovered is pronounced “Scone”. This didn’t help me much as I’m very much a ‘scone rhymed with John’  rather than a ‘scone rhymed with own’ kind of girl. Apparently it’s the posh scone/own you use to pronounce Skåne.

Have I lost you?

Båstad was pretty much booked up because of a tennis tournament, so Ängelholm was my next choice; and what a good choice it was with the adorable Klitterhus hotel which more than made up for the fact that I couldn’t shout Båstad at everyone.

Our sightseeing day in Ängelholm started quite well.  As seems to be our habit, we had taken a boat tour from the marina, along the Rönne River, to the main town. The town was pretty, arranged rather like the hub of a bicycle wheel with several bridges leading to it. We had coffee and bagels and then, woman on a mission, I became fixated on finding the clay cuckoos for which the town is supposedly famous for making. Now I don’t know about you but I was looking for something that resembled a bird. I searched in many shops looking for this creature, hoping it would make a good souvenir. I should really have asked someone but the Burgess trait of not seeking help seemed to have seeped into my psyche by some sort of touristy osmosis. Since our return to the UK I have googled the famous clay cuckoo and discovered it looks like this: 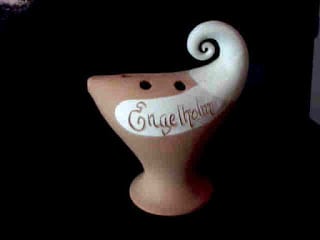 It is a little musical instrument that you blow into. Not something you’d possibly find inside a clock then?

However we did find some chocolate which cheered us all up: 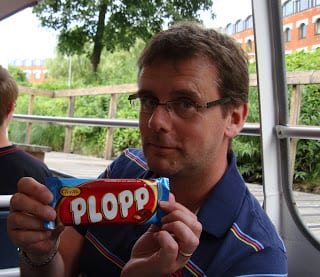 As we sat in the boat on the return journey, the boys had a Plopp and I discovered a little gem in a tourist leaflet about the town….

On May 18, 1948, a Swedish entrepreneur, Gösta Carlsson, claimed he had seen a UFO land in the forest clearing at Kronoskogen, a suburb of Ängelhom. Whether he did or not has obviously never been proven, although it would seem the area had witnessed ‘large-scale test flights’ over the years. Nevertheless, in 1963 a memorial was constructed on the spot where the supposed landing had taken place. The memorial consists of a concrete model of the UFO plus the landing traces.

“I must see this before we leave,” I said, “it’s not far from the hotel, just a few minutes drive.”
‘Must we?” muttered both boys in unison, showing a complete lack of enthusiasm and interest in this very rare attraction.
“Yes, we must! I’ll navigate.”

It was starting to rain at this point and the sky was becoming ominously dark, but Dougie and Rory were given no choice in the matter: we were going to see the memorial. It seemed an easy route on my map but the road we took didn’t look quite right. This was because we were driving on a cycle path. Dougie’s rather dubious solution was to put his foot down so we could get to the end of it quicker. We eventually ended up in a car park of sorts in the forest. It was wet, muddy, we weren’t dressed for the occasion, and we weren’t entirely sure how far into the forest the memorial was. As we ventured forth on foot, the mozzies started to attack my ripe husband, our son began to moan and whine in spectacular fashion….and then an enormous crack of thunder boomed overhead. We went no further.

As we tramped back to the car, some two minutes after getting out of it, I figured that if the little green men had managed to travel millions of miles to reach a forest clearing on the west coast of Sweden, then how come we had given up so easily.

And I bet they didn’t use the cycle path.