Home  >  Blog  >  Mum’s Gone to Sweden: In search of the elusive Klitterhus

A sunny morning in Trollhättan, and a final hearty breakfast by way of Albert’s Kok (right, must stop the double entendres) before our journey to find the elusive Klitterhus (oops, done it again). We seemed to hit a whole series of roadworks on the main roads south, which made us feel like home.

Dougie and I had decided to try and be more relaxed about eateries, to do as they always say in the guidebooks “Come off the main roads, find a little town with a local restaurant”, rather than our usual pick up something from a service station on the way. My guide book recommended Falkenberg “a well-preserved little town that really comes alive in July and August”. Unfortunately Falkenberg wasn’t at all alive on a Sunday lunchtime in July. We drove round for ages trying to find the hub of the place and would have given up, were it not for the fact that a certain teenage boy had been necking a Swedish version of Red Bull in the car and was now desperate for a pee. We parked in a very dull part of town, managed to find the bus station with no passengers and no buses and also, unfortunately, no toilets.

Rory was now in some discomfort, Dougie had split from the posse to go in search of a toiletter, there was a cold wind whipping down the main street when suddenly I spied a rather weird burger place/shack and ushered my boy in. As he found the gents, I perused the menu despite having no intention of ordering. Panic over, we shuffled back out saying something like “ooh let’s go and find your father”. Couldn’t find Father for love nor money. We hadn’t decided on a meeting point but thankfully mobile phones came to the rescue and we had an emotional reunion in the bus station as the metaphorical tumbleweed bounced down the street:

We returned to the car, said something to the effect of, ‘Lets get out of f***ing Falkenberg’ and headed back to the motorway, towards the beckoning golden arches of a McDonalds where Rory was, once again, able to drool over the beautiful blonde girls with the swishy ponytails.

May I say now, my apologies to anyone reading this who lives in Falkenberg. I’m sure I’m doing it a great disservice. But stress, hunger and a full bladder can have a negative effect on one’s view of a town.

Onwards, then, to Ängelholm, where we found the beautiful Klitterhus. A former beach pavilion, it was a fabulous find, all seasidey decor, huge picture windows with views over the bay, fresh flowers in the bedrooms. Rory said he felt like he was in a Jack Wills advert. 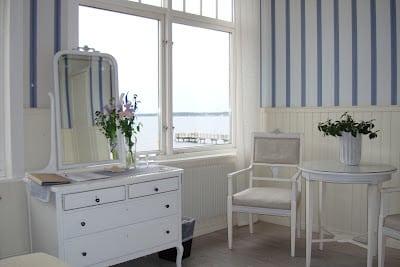 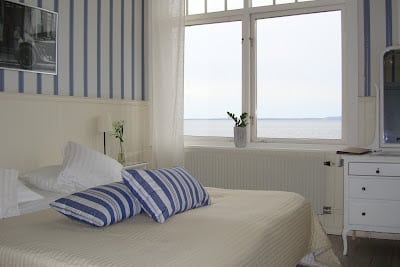 We couldn’t eat in the restaurant that night as the hotel had a booked party, so we wandered down to the marina and had one of the best meals of the fortnight in Hamnkrogen. More beautiful blonde waitresses to put smiles on the boys’ faces, great steaks and my pud – hot chocolate brownies with blueberries and strawberries – made for a perfect evening.
As we returned to our rooms, suddenly the party below decided to have a bit of a dance. The disco had started up. As the bass notes thumped underneath us, Rory suddenly came storming into our room:
“I can’t sleep with that!!”
“Oh, love, is it too loud?”
“Yes it’s too loud, but it’s bloody Abba!”