Dougie earned lots of brownie points for booking a superb hotel, the Aviator in Farnborough, Hampshire, for our last-minute Easter break.  But this wasn’t the end of his brilliant ideas. In an effort to escape the traffic over the Easter Weekend he boxed clever. We avoided travelling on Good Friday altogether as most major routes were likely to be extra busy. Leaving the drive until the Saturday meant that the roads were reasonably quiet on our journey from Lincolnshire to Hampshire.

He was even more inspired when he decided that rather than race down the A1 and the M25, we should take the scenic route and find somewhere to visit for a couple of hours on the way.  A quick look at the map and my husband suggested Bletchley Park, near Milton Keynes. The man’s a genius.

Bletchley Park was the centre for British code-breaking during World War II and the birthplace of modern computing. At its peak there were 10,000 people at Bletchley Park and its associated outstations, painstakingly listening to radio signals, deciphering, interpreting and relaying messages. The famous Bombe machine which helped to crack the Enigma settings was developed here by Alan Turing and Gordon Welchman, building on the process started by the Polish Cyber Bureau just before the beginning of the war.

After the war the site was used by various organisations such as the Civil Aviation Authority and the GPO, which became British Telecom. It was very nearly destroyed in 1992 but a group of local historians saved it from the bulldozers, establishing the Bletchley Park Trust, to preserve the site for the nation. And the nation should be very grateful to those original supporters, because now Bletchley Park is a top-quality historical attraction: the code-breaking huts have been preserved and the vast site has been made even more informative with the addition of a museum and visitors’ centre.

You really need a full day to explore everything at Bletchley Park. We only had a couple of hours to spare so were grateful that the ticket allows unlimited returns within a year. We walked around the lake to the beautiful Mansion where the code-breaking began and explored the huts to imagine how the work was carried out. The museum is packed full of information and equipment and has on display the largest number of Enigma machines in the world plus a rebuilt operational Bombe.

A complimentary personal video guide is provided for everyone. It looks a bit like a large mobile phone, hanging from a lanyard and there are comfortable headphones to wear so you can just listen to the commentary in each location if you would rather look at your surroundings, rather than the screen. It’s easy to use and allows you to choose how much information you wish to absorb. It certainly helped us piece together all the operations which were taking place.

As is often the case with historical places, it’s the little things that can make as much of an impact as the main attractions. I loved spotting the personal touches which had been added to the huts to recreate life at Bletchley Park: a cardigan draped over a chair, coats hanging up on a hook, an open handbag with a packet of cigarettes and a silk scarf  spilling out. 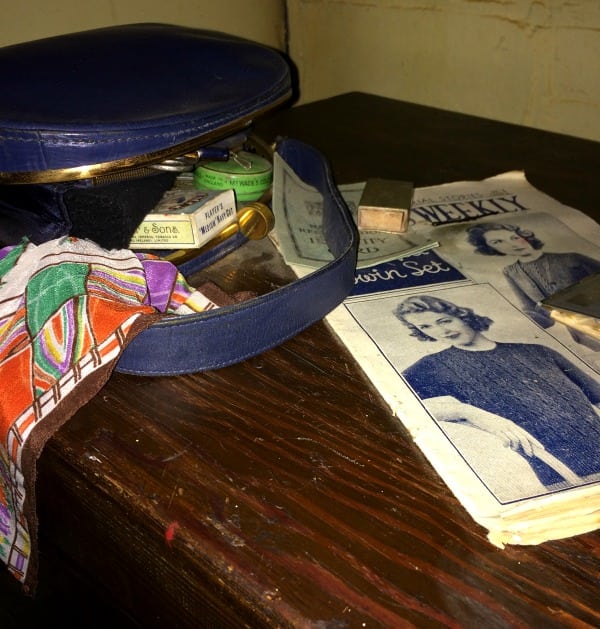 Listening to the guide, I was intrigued to learn how workers were always trying to discover simple ways to improve efficiency. In one case, the operation was streamlined between huts 6 and 3 by passing documents via a wooden chute: a broom shoved the papers in at one end and a string was pulled from the other. It wasn’t just complicated mathematics which helped win the war here.

There were so many people working at Bletchley Park that medical staff made sure they were kept fit. Regular UV light treatment was available, as so many operatives were working long hours in huts with blackout curtains. Halibut liver oil was given too, to ensure a healthy workforce.

A whole host of social activities were arranged for the workers: drama groups, dancing and fencing. Chess was also a popular pastime, unsurprising when you discover that chess players, such as the famous code-breaker Hugh Alexander, were often recruited to Bletchley Park because they tended to have a natural aptitude for the job.

One little nugget of information which was of particular interest to me was the fact that before the war Hugh Alexander, one of the main code-breakers working on the Enigma machine, had been appointed to the Head of Research at the John Lewis Partnership. After the war, Gordon Welchman, another code-breaking genius, took over that same job with the retail company, on Alexander’s recommendation. I worked for John Lewis for 11 years after graduating from university and it’s only now I’ve appreciated the background of these two men who held important positions in the organisation.

It might sound puzzling that two brilliant mathematicians would be employed in a retail organisation but when you discover that the founder, John Spedan Lewis, was a keen chess player, the links between him and Alexander (an International Master) become more obvious. Researching this since our visit I’ve also found out that Spedan Lewis established the National Chess Centre with Alexander in 1939. It was housed on the upper floors above the flagship store in Oxford Street, where I worked at the beginning of my career with the company. The bombing of the store in 1940 unfortunately destroyed it but the Partnership Chess Club continued.

Of course, the one man most people think of when you mention Enigma and Bletchley Park is Alan Turing. Interest in the famous code-breaker has probably been enhanced since the 2014 film, The Imitation Game, was released, starring Benedict Cumberbatch as Turing. 2014 was the year Bletchley Park completed the first phase of essential restoration with the addition of the Visitors’ Centre. The timing was perfect.

I was very moved to read a surprisingly emotional letter from our PM at the time, Gordon Brown, officially apologising for the treatment Turing received when he was convicted for gross indecency. Having learned so much about this man and his staggering talent, it’s hard not to feel deep sadness and anger and one wonders what else he could have achieved if he hadn’t taken his own life.

In the museum you can find an astonishing statue of Turing built by Stephen Kettle using layers of slate from North Wales, where Turing had spent many childhood holidays. There are 200 individual pieces in the shoelaces alone, the whole piece weighing one and a half tonnes. 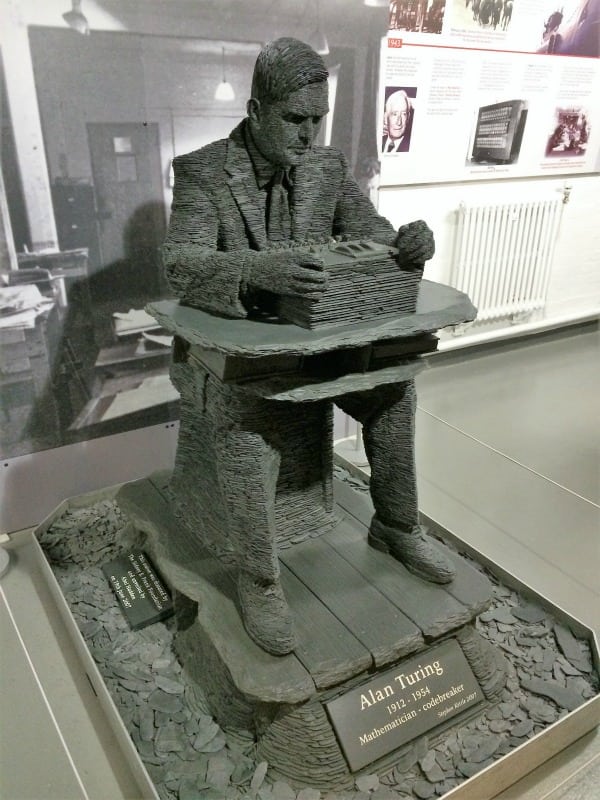 I’ve only touched on a fraction of the fascinating information to be gleaned from a visit to Bletchley Park. Thank goodness for the annual ticket.

It’s thought that the efforts of the code-breakers reduced the length of the war by two years. The contribution of these women and men (women outnumbering men 3 to 1), is immeasurable.
As we left Bletchley Park, our minds were whirring with codes, spy stories and with a sense of deep gratitude to all those who played their part in this vital work.