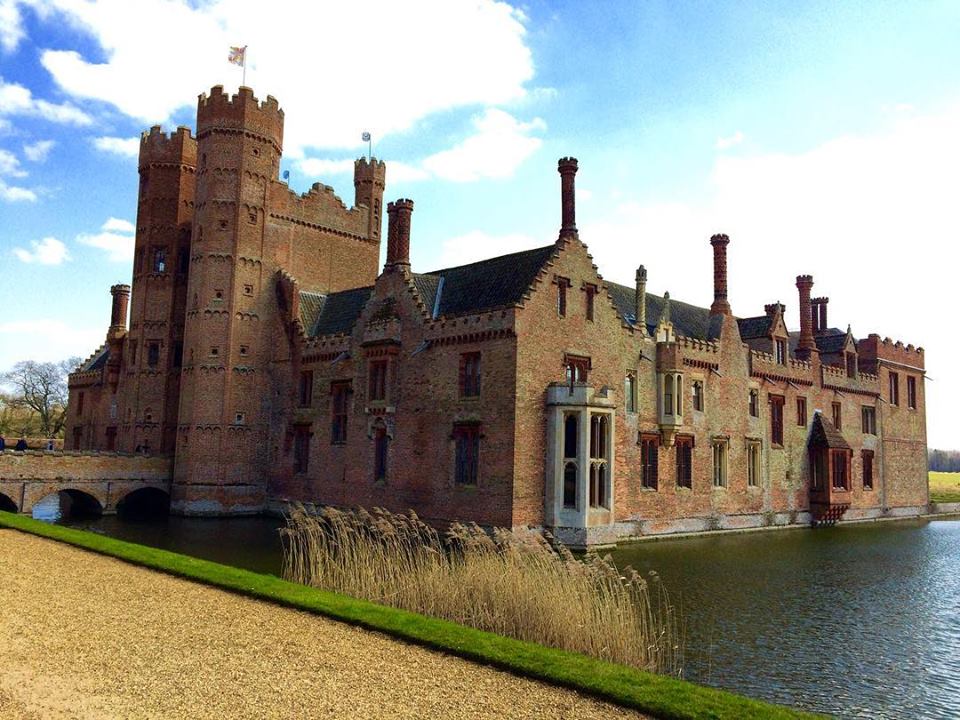 After the great success of our day at Burghley House over Easter, Dougie and I have been inspired to continue with our new game of ‘where to go within an hour of Holbeach.’ It makes for great column material for my weekly stint in the Lincolnshire Free Press, even if I wander over county boundaries from time to time.

Oxburgh Hall was our latest find, a National Trust property a few miles south of King’s Lynn.  Built in 1482 by the Bedingfeld family, this splendid manor house is still home to the family (not Natasha and Daniel, in case you were wondering. No ‘i’). It’s a mix of medieval through to Victorian architecture, with many parts of the building having been altered over the centuries, but it is an imposing structure, surrounded by a moat and 28 hectares of gardens and woodlands.

The highlights of the house include hidden doors in the library, embroideries worked on by Mary, Queen of Scots while she was imprisoned in England and a very small priest’s hole used by the Catholic family in Elizabethan times to conceal persecuted priests. We peered into the hole but Dougie, initially gung ho about manoeuvring his way in, changed his mind as he realised that with his back, he might never get out again. “They were a lot smaller in those days,” he mused and we decided a climb up to the roof was more manageable for the old joints.

In the grounds, there is a formal parterre garden, a kitchen garden and a delightful woodland walk which was particularly pretty as the paths were lined with daffodils. We came across a den-building area where previous visitors had tried their hand at the craft. My own Bear Grylls fashioned a rudimentary wigwam out of fallen branches but it soon collapsed. He blamed it on his tools…

As it was still the Easter holidays, a number of children were searching for tiny bunny rabbits inside the house and in the grounds. It took me back to the days when Rory would become so obsessed with children’s trails we would hardly have time to look around before he was urging us to move on to the next location to find a hidden clue. I smiled as I watched other parents having the same frantic experience.

Afternoon tea (or rather, lunchtime latte after a far too big breakfast) was excellent. Dougie declared his cheese scone to be even better than the one in Burghley House (he’s quite the connoisseur). There’s a second-hand bookshop that’s worth a rummage, plus  a gift shop selling plants and garden bits and bobs.

One of the best parts of the day was spent just soaking up the surprisingly warm sunshine. That’s just the kind of weather they need in the summer when there is an outdoor performance of Shakespeare’s Much Ado About Nothing by The Lord Chamberlain’s Men. They are a male-only touring group and you should be able to catch them around the country, to celebrate the 400th anniversary of The Bard’s death. Oxburgh Hall is the location on 14 July 2016.

**** Update October 2016 **** At present the hall, tearoom, gift shop and bookshop are temporarily closed whilst part of the hall undergoes repairs. Gardens are open as usual. Please check website for details.