Home  >  Blog  >  Mum’s Gone to Sweden: Getting a soaking on the Bohuslän coast

We didn’t think we would see any of the famous Bohuslän coast during our trip round Sweden. We had promised ourselves that maybe we would travel to this part another time. But it dawned on us, while staying in Trollhättan, that we weren’t too far away from the west coast and it would be a perfect day trip. So, after an early breakfast at Albert’s we took the big brown bear across to the pretty fishing town of Lysekil.

Lysekil’s chief attraction is probably the aquarium, but we’ve seen plenty of those on our trips so instead we took a walking trail across the rocky headland, Stangehuvud, made of the local pink granite. On the way I did my usual ‘reading out bits from guide books’. I rather liked the story of a local figure, Carl Curman, a health guru of his day, who convinced his patients that sunbathing on the rocks was dangerous because ‘the amount of air must be regulated.’ He suggested they pay to use the bathhouses along the waterfront, owned, funnily enough, by Mr Curman himself. It also said in my book that these classic bathhouses are now a popular place for segregated nude bathing. We gave them a miss – well, it was a bit chilly. 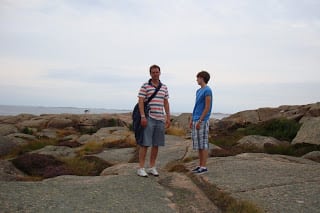 It was an enjoyable trek across the granite rocks until, as you will see from the photo, tempers started to fray and everyone became grumpy. The weather was on the turn and we were no longer that close to the town. Seconds after this photo was taken, the heavens opened. Rory and I instantly regretted leaving our raincoats in the car. Dougie had his Jack Wolfskin with him…Mr ‘Prepared For Any Eventuality’. We had to dash back to the harbour, watching all the sensible people dressed in cagoules  whilst I cut a dash in my fetching turquoise cashmere cardigan.

Back in the harbour we looked for somewhere to eat and procrastinated far longer than someone dressed in a sodden cardi should really do. In the end I dived into a place called Restaurant Rosvik. The boys were convinced I’d made a terrible mistake but, in fact, it proved to be an epic lunch – a huge chicken and bacon baguette toastie with massive bowl of potato wedges. Back in the car, with my trusty Rough Guide, I turned the page and read “Lysekil has plenty of mid-range family restaurants…one good option is Rosvik“. I pointed this out to Dougie and pretended I had picked it all along because of the recommendation.

Back at the Albert that night we all cosied up in one room for what seemed like hours and hours (in fact it was hours and hours) to watch the Opening Ceremony of the Olympics. The boys lay flat out on the double bed and I was elbowed off onto a nearby chair. But this was my favourite chair from the whole holiday – covered in sheepskin yet cool, chic Scandi design. We had to watch the ceremony on Eurosport, with a Swedish commentator, but managed to keep up with what was going on as now and again we’d hear “Shakespeare…Mr Bean….Arctic Monkeys, ah, Sheffield! Sebastian Coe! Judas Priest!” I’m pretty certain Judas Priest are from Birmingham but if he was keeping up with the wonderfully wacky Danny Boyle creation, then I think I can forgive him.