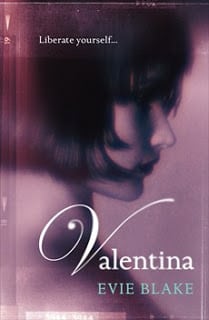 Hearing the story of a friend whose husband always slept naked, my grandmother once said, in her inimitable northern style, “It’d be like having strawberries for your tea every night.” By that she meant, if something is no longer a special treat it ceases to have appeal.

Shakespeare said something similar to my granny in the opening lines of Twelfth Night:


‘If music be the food of love, play on,
Give me excess of it; that surfeiting
The appetite may sicken, and so die.

But maybe I’m out of step? Erotic fiction is now the flavour of the month, following on from the recent success of Fifty Shades of Grey. I haven’t read the series, but I am aware of the views for and against. One of the main criticisms levelled at the trilogy is that it is poorly written, with a clunky first-person style. Thankfully Valentina, written by Evie Blake (pen name for the author Noelle Harrison) is well-written for this genre. The novel is inspired by the 1960s style icon from Guido Crepax’s original illustrations and this helps to push it up a notch from the usual fare.

The story concerns two women: Valentina, a photographer living in Milan in 2012 and Bella, a courtesan from Venice in 1924. Valentina finds it difficult to settle down with her boyfriend, Theo, until a side of her, until now unexplored, is revealed when she accepts an assignment involving the darker side of desire. Bella, meanwhile, abused by her husband, adopts a secret life as a prostitute, constantly seeking true love.

What I don’t get about this type of women’s erotica are the odd rules which seem to govern the language used. Why is it okay to write ‘penis’ but not ‘vagina’? Why is everything couched in such a coy manner? Even the scenes involving domination and submission were more M&S than S&M. It must make it very difficult for a writer of this genre to come up with expressions for a woman’s genitals without using common words. Blake does her best with this most of the time, but I did howl with laughter at the sentence “She feels a finger gently outlining her oval, and then pushing into its plushness”. However I did cheer when, after countless sexual escapades, eventually on page 344 I read the word ‘clitoris’. I wonder how that slipped in?

I’m reviewing this book and yet I would never have picked it up in the first place, so I do appreciate that I am maybe being a little unfair. Readers who seek out erotic fantasy such as this will find what they are looking for and more. There were parts of the novel which intrigued me: the glimpses of Milan and Venice and the denouement regarding Theo’s collection of paintings, but all this did was make it obvious to me that I’m not the target audience. But, you see, when I read a book which has sexual scenes in it, I’m just like my grandmother – yes, give me strawberries, but only when they’re in season.

Valentina is published by Headline, in paperback original and eBook, priced £7.99