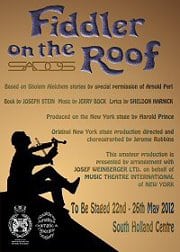 Spalding Amateur Dramatic Society (SADOS) brought Tsarist Russia to life this week when they staged an exceptionally good production of Fiddler on the Roof at the South Holland Centre.

The show, one of the most successful musicals in the history of theatre, tells the story of milkman Tevye, struggling to maintain his Jewish traditions while the world around him is changing. He is weary, his horse is lame, his wife Golde gently nags him and his five strong-willed daughters exasperate him. No wonder, then, he questions why God should test him and so dreams of a life without poverty (If I were a Rich Man).


Tevye was played quite superbly by Alasdair Baker, whose powerful warm-toned voice filled the theatre. His accent was excellent and his facial expressions mesmerising, with eyes which twinkled with humour. He was partnered by Beverley Moore, playing his brisk, no-nonsense wife, Golde, whose guard eventually dropped a little in the achingly beautiful duet, Do you love me?

I have to say, hats off to a fabulous ensemble. Yes, some of the accents were a little more Lincolnshire than Leningrad, but the group numbers for Tradition and To Life were fizzing with energy. Congratulations to the choreographer Charlotte Smith (assisted by Nicky Lavis) who succeeded in creating very effective, sharp moves to bring out the best in the cast. And well done to the chaps on Friday night who all managed to keep the bottles on their heads throughout the whole of The Bottle Dance.


Some great cameo parts were evident in the production, namely Jane Fulford, Debbie Richards and Peter Breach. Scene-stealer of the night has to be Mandie Collier, fresh from her success as ‘Mother’ in SADOS’ production of Sandcastles: her garrulous, gossipy matchmaker, Yente, was a joy.

The orchestra, conducted by musical director, Lynne Baker, played exquisitely throughout the show; costumes were spot on and the set, based on the latest Broadway revival, was deceptively simple and a credit to the team.

If I have one gripe it was that the first half was too long. If they could have lopped off twenty minutes by shortening a song, a scene, or quickening up the dialogue a little, that would have been appreciated. Nonetheless, the director, Martin Tyrrell and producer, Elaine Deathridge, should be justly proud of their production.

As Tevye might have said, “On the one hand, this was up there with the best of all SADOS musicals. On the other hand……………there is no other hand.”