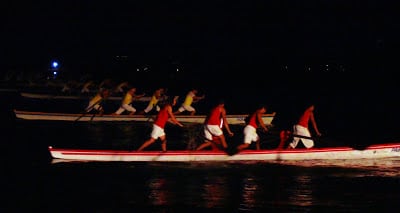 Thanks to Colin Nicholson’s article, ‘Next Stop: Venice’ in the Sunday Telegraph’s Discover section, I was transported back two summers to our fabulous holiday in Lake Garda, Italy. 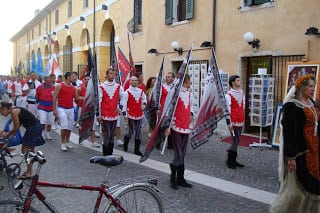 The article was about the gondola regatta which takes place on Saturday evenings around the lake during the summer months. We noticed when we were staying in Bardolino, on the eastern side of the lake, that ‘bisse racing’ was going to take place but had no idea what it was. That evening, sitting outside at a lakeside restaurant, the air gently cooling as the sun dipped a little, we could hear music, drums and a general heightened excitement before we saw the teams walking past us, accompanied by flag-bearers dressed in traditional garb. 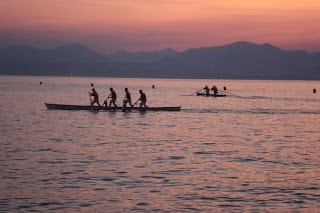 Following them down to the lakeshore, with all the other tourists and locals, it took some time before the racing began as they had to punt/row/gondle? into position. As you can see from this photo on the right, it was quite a breathtaking sight with the setting sun casting a pink glow across the water and the mountains. It was quite dark when the race actually began but the thrill was still palpable, though as tourists we had no knowledge of how long the race was, how many circuits they had to do and, in fact, were not completely sure who had won each heat. Random clapping and cheering ensued.
The telegraph article explains why gondoliers row standing up. Apparently in Venice in the 13th century, the gondoliers needed the extra height to see over the mist and although today’s competitors use both hands, they would have traditionally rowed one-handed because they were holding a fishing rod in the other. I’m wondering whether that reason would fit with punting in Cambridge. From my time there, I can vouch for misty mornings but, as punting requires two hands, probably not much fish to be had.