You may recall our disappointment with our Vauxhall Corsa rental car which was scratched and dented pretty much everywhere (but the Portuguese rental agency didn’t see that as a problem). On the second day Dougie discovered rather too late that the front nearside tyre was pretty bald (yes, we should have checked at the airport: thought we had, too blinded by the dents). Never mind, he thought, I’ll just change it for the spare. The spare had a huge gouge in it. So we were left with one probably illegal tyre which was preferable to the gored spare. “You don’t want to go far this holiday, do you?”. We were an hour and a half’s drive from the airport and we would have had to return it there for them to probably just shrug.

We chanced one trip out and as we reversed out of the car park we heard a tinkling noise very reminiscent of glass. Marvellous, the glass had fallen out of the driver’s side wing mirror – into lots of tiny pieces. Why would it do that? We decided to rescue the situation. A wobbly drive to the Intermarche to look for some tape (yes, Dr Duct Tape hadn’t brought his this time…what was he thinking!) and I searched in the toiletries aisle for a cheap wash-bag from which we removed the mirror (after paying for it, obviously). We taped the little rectangular mirror into the wing mirror’s housing and it did the job. Had to pay 40 euros to the rental agency at the end of our holiday for the damage. Ha! Now trying to get that back from the insurance as we, thankfully, had excess cover.

This photo was taken at the ‘end of the world’, Cabo de Sao Vicente, the most south-westerly point of European mainland. It was cold, windy, and it was the day the glass had dropped out of the wing mirror so, as you can see, everyone’s a wee bit tetchy. We didn’t stay long.

Sagres fortress, the next must-see on the list, we didn’t see as the queue was long and I needed a pee as I had refused to pay for one at the end of the world.

We went home, via the supermarket to buy our repair kit and lots of wine.

We did go for some walks on our holiday – not proper adventure walks, just a little wander over the dunes. We tried it on the only day it rained. We got absolutely soaked and tried to take shelter underneath a shrubby tree thing, with Dougie getting all Ray Mears again, finding a filthy bit of old plastic sheeting and attempting to make a roof for us in the shrubbery. It didn’t work. We went home, wet. We drank wine.

Martinhal resort had been getting some bad press in TripAdvisor reports but either we’re not very discerning as regards food and service, or things have improved. Certainly the family buffet restaurant was like most buffets ; a bit chaotic but plenty of choice and full tummies. The fish restaurant, As Dunas, was frequented by the Torode family, so we took that as a good sign. We loved the food there and were far more adventurous than usual, choosing our fish from the ice cabinet and picking some special Portuguese dishes like fish Cataplana which was like a hearty fish stew served from a copper pot. Rory really enjoyed his fish and announced one evening, “I’d like more sea bream at home, I think”. Bugger me, looks like a portion of Bird’s Eye breaded cod won’t cut the mustard anymore.

There was plenty of this. Two weeks of lolling around, swimming, a bit of tennis and lots of book reading. These final three photos sum up how relaxed we all were in Portugal. You may want to click on them to see the incriminating arrows! 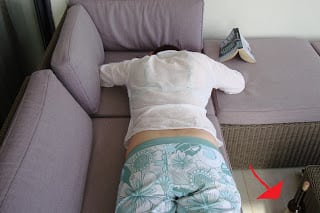 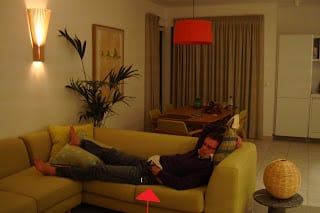 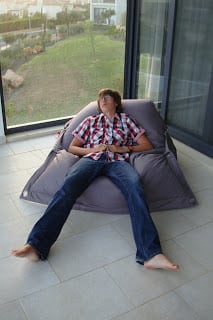