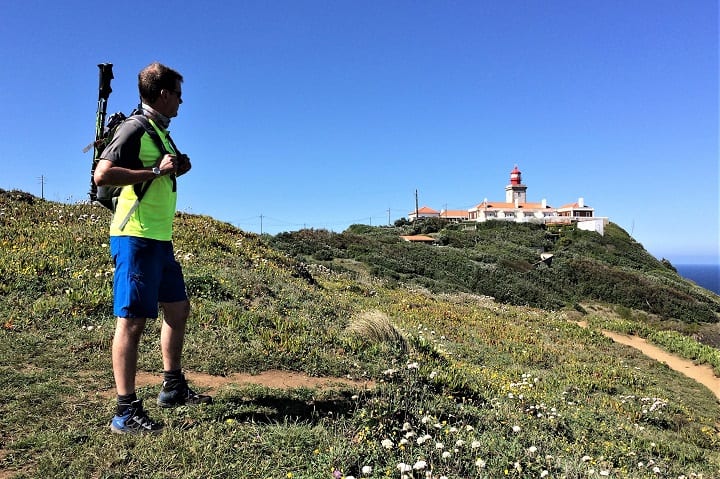 “There’s no room for you, Dougie.”

Jonathan, the French owner of our accommodation, Convento de Sao Saturnino, announced this as the six Inntravel guests gathered around his car. He was taking us all to the starting point of the next section of our walking trail. Dougie looked a little nervous and was contemplating getting a taxi or maybe just walking. Or would he be taken there separately?

The puzzle was solved when Jonathan opened the car door and a rather disgruntled black dog reluctantly appeared from the foot well. It was the doggy who couldn’t come for a ride, not Dougie. The misunderstanding was caused by Jonathan’s French accent.

This kept us chuckling all the way to Cabo da Roca, Europe’s most westerly point. This reminded me of a Portuguese holiday some years ago when the Burgess family visited Cabo de Sao Vicente, Europe’s most south-westerly point. That was memorable for being cold, everyone being tetchy and the glass in our hire car’s wing mirror falling out. Dougie still dines out on his resourcefulness that day. He found a supermarket, bought a cheap make-up bag and duct-taped its mirror into the empty casing in the car.

I digress. Where were we? Yes, Cabo da Roca, where tourists had already gathered to be photographed at the lighthouse and the monument indicating our westerly position. We didn’t stay here long. The weather was gorgeous and we were excited to tackle Day Three of our Palaces and Pathways of Sintra walk.

We left the crowds and headed north, over the headland, for a short diversion to Praia da Ursa: Bear Beach. This isolated spot is a favourite amongst naturists. Maybe it should be renamed Bare Beach? We were able to peer over the cliffs to the beach; no clambering down today. But the rock formations were impressive, the stacks taking me back to my days studying geography at school and university. I considered waxing lyrical about erosion and rock structures but realised my recollection of it all was a tad hazy, so I kept schtum. Ooh lovely stack! That would do. 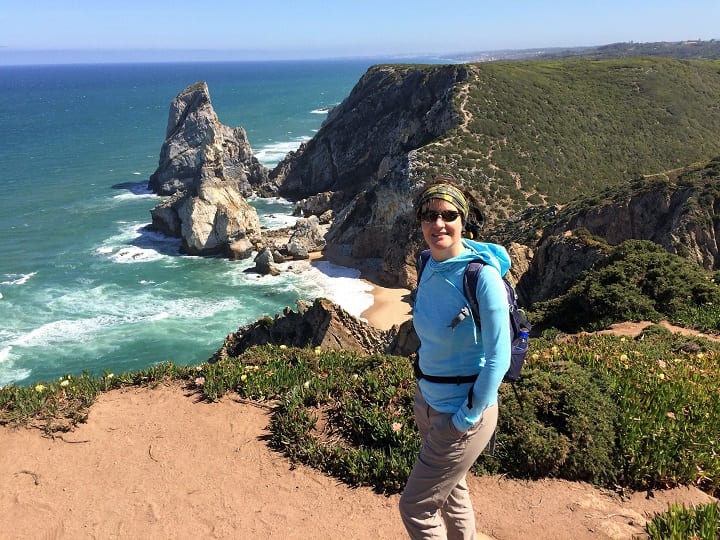 The trail moved inland, perfectly timed for late morning Pasteis de Nata in the tiny village of Ulgueira. Heading back to the sea, through vineyards grown to make the local Colares wine, the next ‘special feature’ of the trail was a blow-hole. We looked down into the hole but the sea wasn’t performing any tricks for us. It gave me the wobbles, however, just peering so far down into the abyss.

Timing it just right for a loo break and more cake, Adraga beach appeared shortly after this. If we’d been staying in this part of Portugal on a beach holiday, I’d have headed for this beautiful sandy spot every day. White, pristine sand; attractive bay; refreshments; car park and toilets. 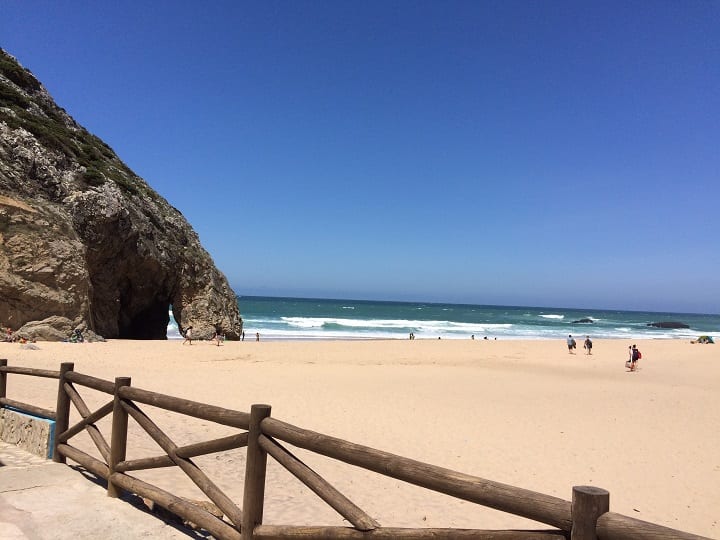 The remainder of the afternoon was scenic but hard work as the temperature rose steadily. We negotiated waist-high vegetation on the coastal path and an uphill hike on the sand. We took note of the warning in our notes about the left-hand turnings towards the sea. These are waymarked only for fishermen who enjoy hanging off the edge of the cliffs. Crikey.

Nearly at our destination, the village of Almocageme appeared and, in the village square, there was a public loo. Our walking notes don’t make a point of highlighting where toilet facilities are located. I suppose they presume you can find them in any of the cafes that are mentioned. But I, for one, would welcome a loo alert. Mind you, Dougie heard me yelp from within the ladies’ in Almocageme. The toilet wasn’t properly fixed to the floor so when I sat on it the whole unit lurched forwards. Maybe the Inntravel route-maker had already sussed this out.

My favourite instruction from today’s walking notes was ‘you spot an abandoned, rusted shell of a car.” Frankly, this didn’t warm me to the area, imagining some lawless community in an otherwise peaceful, pretty Portugal. This car, however, was beside a country path and had been there for so long, it was barely visible underneath the local flora which had now taken up residence.

As we reached our destination, the tiny village of Pe da Serra, Colares, we were instructed to keep an eye out for a green wooden gate at house number 831A. Apparently it was portrayed as a 1950s riding stable in the novel, A Small Death in Lisbon by British author Robert Wilson. The door was located and, either side of it, two fabulous old pots, blooming with bright pink flowers. 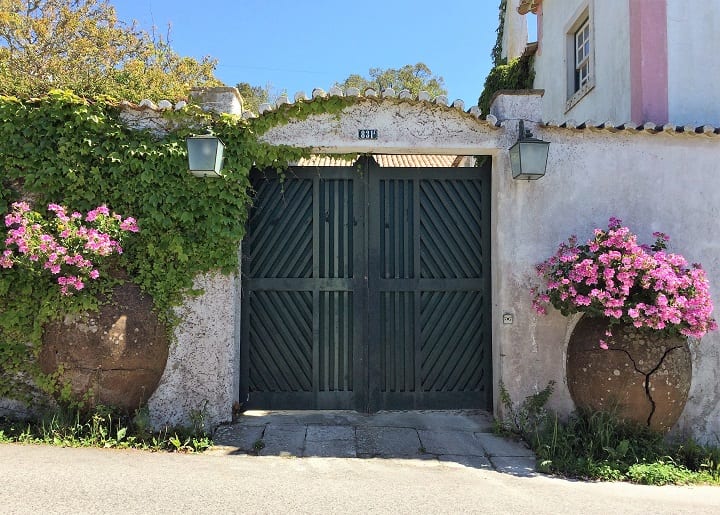 I can’t quite describe the feeling of reaching our accommodation, Quinta Colina Flora. Pretty beyond words: white-washed walls, pots overflowing with flowers, lush green lawns and an aura of calm. A ‘veggie hotel’, this eco-friendly guest house is run by two gracious hosts, Americans James and Aasta. They fell in love with this region of Portugal and created an idyllic, welcoming B&B. 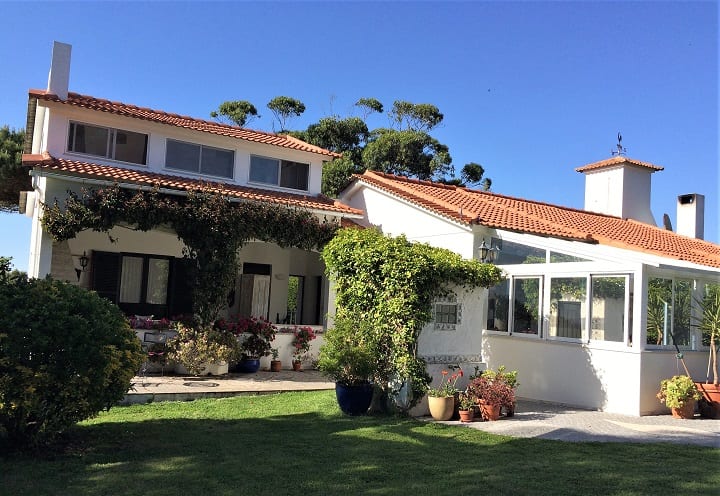 There are only five rooms in Colina Flora and each one has something special whether it’s a sea view, balcony or, as we had in the delightful Marigold room, a huge terrace with wood burner. There was a complimentary bottle of wine in the room which we immediately took to the outdoor swimming pool. We found a spot in the sun, opened the bottle and relaxed. Aasta showed us the separate guest building by the pool which had a kitchen for residents to use for their own meals. There was a selection of drinks in the fridge and snacks too, at a ridiculously low price. Bottles of beer for 1 euro, crisps for 1.25. 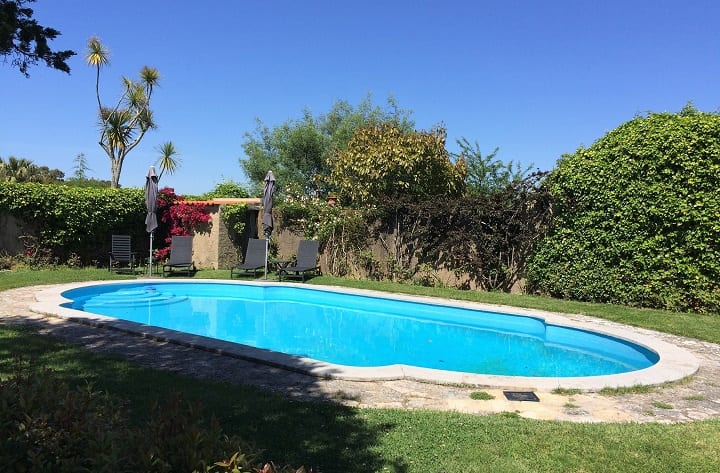 Returning to our room, we found the other member of the Colina Flora family. Their sweet little dog, Lucca, wandered over to our terrace and enjoyed being fussed over in the early evening sunshine. One doggy and one Dougie: firm friends. 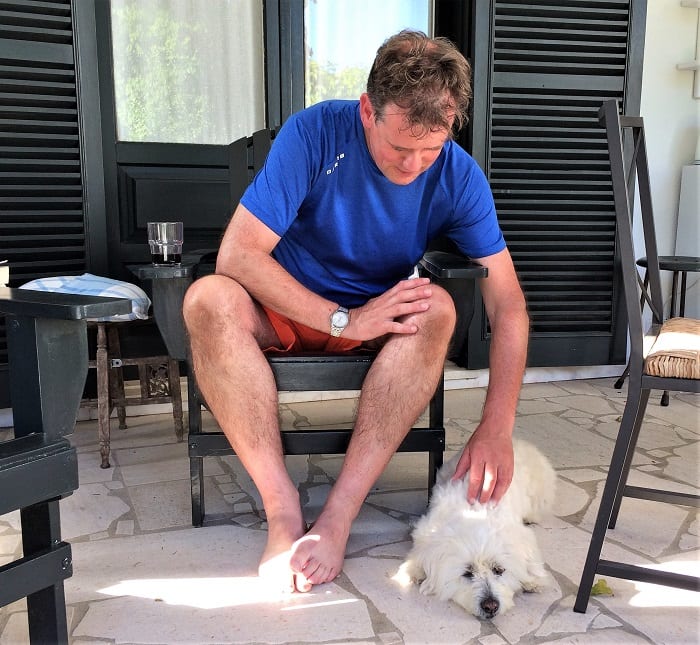