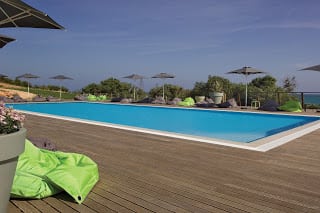 There are four pools in the Martinhal resort and this one pictured, the beach club pool, is by far the most popular. It never looks like this when it’s open – the Fat Boy loungers and beds are pounced on at 10am and it’s like that all day.

We joined the masses on our first day and I ignored my book, so fascinating was the people-watching. This was very much a Home Counties pool: well-heeled families, all with an assortment of good-looking children in tow. I suspect the fortnight we were there, the Ocado deliveries back in the UK must have suffered, such was the large number of their customers who had de-camped to this part of Portugal. I was a little in awe of them, I have to say, and dared not open my mouth to speak, for fear they would discover I was a Northerner and their offspring would be wanting to adopt me as a pet (see Harry and Paul sketch)

Let me describe the indigenous population by the pool:

The Beach Club Pool Mummy – a delightful creature, dressed in floppy hat, Jackie O shades, a teensy bikini with something chiffon over the top and cork wedge heels or beaded flip-flops. Tries to look elegant whilst sinking into a bean bag seat, orders mojitos from Emerson the barman, or a glass of rose or “Have you a green tea?” Can be heard to squeak to her offspring, “Shall we go for some pasta, darling? How about a carbonara?” Either pre-holiday spray-tanned or fashionably pale with very flat stomach and little cellulite: I do hope some of them are, in fact, nannies and haven’t given birth to a brood after all.

The Beach Club Pool Daddy – To a man, sensible shorts is the dress code; not a budgie smuggler in sight. Walks from the bar to the lounger rather carefully, trying to hold belly in. Tries not to boast but is prone to wank-speak on occasions: “Yah, I did 5K today…just under 25 minutes…yah…you’ve got to keep something in the locker”. Is in charge of lugging Fat Boy loungers to where wife is flapping about trying to bagsy a spot (though they’d never say bagsy).

The Beach Club Pool Baby – Most of the young children are dressed in an all-in-one lycra suit or half-naked with mamma chasing them in her heels trying to put more sun-cream on their reddening shoulders. It is very windy here in the Algarve but everyone has brought suntan lotion in a spray bottle so most of the cream disappears into the air. Children seem to be named after Tellytubbies.

The Beach Club Pool Teenager – Granted there aren’t that many but the few that are sprawled about the decking are dressed in a JackWillAberFitchHolliDry combination of T-shirts and board shorts with the band from their boxer shorts visible (the young chaps): bikinis or very fitted shorts and numerous friendship bracelets (the young girlies). They all sit within their family groups, plugged into iPods and ignoring parents. Heard to grunt now and again before they shuffle off into the shade. (NB: I have one of these).

It is while I’m absorbing all this that I start imagining I can spot someone famous. I mistake an over-weight bloke in a navy polo shirt for James Corden and then suddenly yelp to Dougie that John Torode from Masterchef has just walked by. There is much peering through sunglasses to take a better look and then we both realise that I’m right. It is John Torode, dressed in the same knee-length shorts uniform worn by the other Beach Club daddies and an attractive white linen shirt. He is at the resort with his wife and young family: he has two littlies and two teen boys much like mine.

You’ll be pleased to know, readers, that I behaved impeccably. I did not jump up and down hysterically or run up and ask him to autograph my napkin, nor did I photograph him or shove my camera-phone in his face. No, I acted as if  I am surrounded by celebrities all the time. Everyone else seemed to behave too, allowing the man to enjoy his family holiday, but many, like me, used their sunshades and books to hide surreptitious glances.

Rory looked up from his iPod and told us that a Masterchef techno spoof song was in the charts. It’s really catchy and it was so tempting to entertain the pool by leaping up to sing “I like the base, base, base, base, I like the buttery biscuit base” but I’d have been lynched so I chickened out. Shame, I’m sure he’d have loved my rendition.

We saw the Torode family a fair few times that first week. We ate at As Dunas, the hotel’s fish restaurant, on a number of evenings and they were seated at the next table on one occasion. As I tucked into my sea bass and fries I thought to myself, “if it’s good enough for John, it’s good enough for me”. Pass the ketchup, JT.