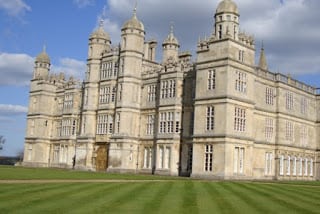 Why is it we often neglect to appreciate the things of wonder which are right on our doorstep?

Burghley House, near Stamford in Lincolnshire, is the most beautiful 16th century house set in glorious parkland laid out by the famous landscape architect, Lancelot ‘Capability’ Brown. As it’s the 300th anniversary of his birth this year, I thought it was high time we re-visited Burghley and pay homage to the great man, by taking a stroll in his gardens.

Burghley has a fascinating history. The house was built for Sir William Cecil, the first Lord Burghley who was High Treasurer to Queen Elizabeth I. However it’s one of his ancestors, David Cecil, who is perhaps more famous today as the gold medal winning 400m hurdler at the 1928 Olympic Games. This Lord Burghley featured under another name in the film Chariots of Fire where, as Lord Andrew Lindsay, played by Nigel Havers, he was seen practising on the Burghley House lawns, his butler placing champagne flutes on the hurdles to stop him catching them with his feat. Apparently this wasn’t quite true – the real Lord Burghley used matchboxes. Another fanciful twist in the film was the Trinity College Great Court run. No-one had ever succeeded in running around the court in the time it took the college clock to strike 12 o’clock. In the movie, Harold Abrahams raced against Lindsay and won: in reality this race never took place but Lord Burghley was the first athlete to do so in his final year at Cambridge in 1927. No wonder he refused to allow his name to be used in the film, given the inaccuracies.

It was too sunny a day to take a tour around the house; the gardens were our focus. The parkland was as I’d remembered; avenues of lime trees, formal and informal gardens, sweeping vistas, the deer, the Serpentine Lake. A new addition since our last visit, which must have been when Rory was at primary school, is the Garden of Surprises; a quirky selection of fountains, obelisks and grottoes, very like the Serpent Garden in Alnwick Gardens. We spent ages in here, dodging squirts of water, exploring misty grottoes and occasionally just sitting doing nothing.

I don’t remember seeing the Sculpture Gardens last time, but I suspect this has developed over the years as it was reclaimed from Capability Brown’s lost lower garden in 1994. There are some stunning sculptures here and it’s a large enough area for the more abstract, contemporary pieces to look at home in the surroundings without dominating them. There’s no set path so just wander around and the works of art will surprise you as you amble.

If you are ever in the area, it is definitely worth a visit. Current prices are £14 for a house and gardens adult ticket (£7 child 3-15) and £8.50 for a garden ticket (£5.50 child). There are no costs to park and walk through the parkland so you can enjoy one of Capability Brown’s defining works whatever your budget.

Here’s a selection of my photos from the day.