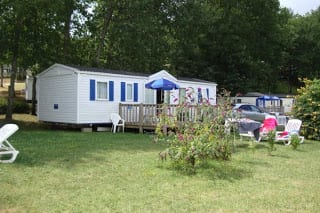 In order to get to this hut on the left, we had to drive about three hours in England, half an hour on Eurotunnel and an eternity in France, stopping off for a night in Orleans, South of Paris. It did occur to me….often…that a similar hut could be found in a holiday park in Norfolk just up the road but hey ho, the journey is all part of the holiday, is it not? Jury’s out on that one.

I pored over the maps before we left and sat forlornly in the car, prodding GPS co-ordinates into the SatNav which we only recently discovered went all the way to Europe. I was hoping to avoid the infamous Paris ring-road, the Peripherique, yet the annoying SatNav woman chose three routes, all going via Paris. Bum. I tried pressing buttons to see if I could force her to take the capital out of the equation, but to no avail.

I googled “routes to Orleans” and a suggestion was made to go via Rouen and Chartres. We were familiar with much of the route so plumped for this slightly longer but divorce-avoiding option. However SatNav woman was having none of it and, once we reached the continent, despite us heading happily towards Rouen, kept urging us to head to gay Paree. We turned her off and relied on my excellent map-reading….

Dougie was quite upset when SatNav Sally was given the heave ho, but only because he had fallen in love with her French counterpart who chirped in the names of French towns in such a sexy whisper you’d think she was sitting with her skirt hitched up, smoking a Gauloise. I could never have imagined the town names of Evreux, Elbeuf and Louviers would cause such a stirring in the old Scottish loins sitting next to me. Concentrate on the road, man.

We made sure we only stopped at big service stations which were more likely to have proper toilets instead of holes in the ground. We avoided the picnic-stops which looked attractive but were likely to end in tears and wet shoes. It does annoy me, this inability of the French to get their act together and bring their lavatorial facilities into the 21st century. The big UK service stations, now with spotless, plentiful loos together with M&S and Waitrose concessions, are a joy in comparision. The loos in the town centres are even worse. Dougie visited one later in the holiday where the urinal wasn’t plumbed in at all so poured onto the floor. As he got back in the car, the stench of pee was so bad he was sent back out in the rain to dance in a few puddles, much to the bemusement of the locals.

On the plus side, the French roads are a dream and we reached Orleans without a hitch and marriage intact. I was given a gold star for choosing the Novotel Orleans La Source, a little oasis just off the motorway in a leafy suburb of the city. Clean, smart, little outdoor pool, great family-friendly restaurant and everything extremely efficient: ideal for a one-night stopover.

The next day, a long drive to the Dordogne, but again very easy. Slightly disconcerting when cars overtake and it looks like the driver is asleep, slumped over the dashboard. Of course they are the passengers but even so they are far more laid back than I am. When I’m the passenger I’m bolt upright, looking at road signs and maps. The thought of pushing my seat back and putting my feet up on the window makes me shudder. My husband couldn’t possibly manage to drive without my foot hovering over the imaginary brake.

We survived the journey with frequent stops to fill up with petrol as Hubby feels happier with a full tank because “you just never know”.  Lunch was a selection of strange baguettes with unknown fillings. You’d think the French would at least get the food right at service stations but no, fast food burgers and sad pre-packed sarnies. We really should have come off the motorway and found some little bistro in a local village but that always sounds better in theory. In practice, when hunger strikes, you just need to pull over there and then to stuff some calories in. The “smoothies” which turned out to be sachets of baby food weren’t such a good choice, I must admit.

Check-in was 3pm at our Keycamp reception at the St Avit Loisirs campsite near Le Bugue. We arrived at precisely 3pm which pleased Dougie immensely.

(More of our adventures to follow. Back home now wading through the laundry but it’s such a good drying day: easily pleased)