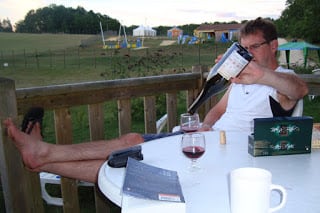 When my husband comes home from work of an evening his first thought isn’t to get the hoover out or dust the skirting boards. On holiday, however, he becomes a bit fanatical about cleanliness, probably because it’s someone else’s muck. Our mobile home looked lovely; great position on the edge of the campsite overlooking the fields, the archery area and the kids club tents in the distance. It looked clean enough for me, but not for old Dr Mop, who started pulling out the sofabed and giving the place a once-over before we’d unpacked.

The next hour was very quiet. Our teenage son, Rory, plonked his belongings in his room, shut the door and lay on the bed, not to be woken until the next morning (bless him, he’d had a long journey). Meanwhile Dougie and I unpacked our duvets, pillows (yes, not just the pillowcases), mattress protectors (!) and far too many clothes then proceeded to unpack without getting in each other’s way: we were both hungry, hot and tired so the least bit thing would have sparked an argument.

After a visit to the supermarket things improved: crisps, lager and chocolate are excellent hors d’oeuvres and mood-lifters. Ray Mears sat himself down at the barbecue, in his barbecue shorts and barbecue T-shirt, and turned the gas on. I thought it rather odd that the gas was coming out of the side of the barbecue and the subsequent flames were melting the plastic instruction label. Thankfully, before the flames reached the gas bottle, Dougie was able to turn everything off, including the torrent of curses which had been floating in the breeze through the campsite.

It transpired that all the screws in the main grill were loose or absent. Despite there being a mammoth Health and Safety tome inside the cabin with excellent advice regarding being careful on wet decking, we didn’t quite anticipate having to re-build a killer barbecue. Sensible people would probably have written a note in the maintenance book then had dinner in the restaurant. Dougie decided to fix it. With his trusty Swiss Army knife, some thick gardening gloves (where the hell did they appear from?) and a huge roll of Duck/duct tape, he reassembled the barbecue, cleaned it properly and slammed the steaks on. On a roll, he then proceeded to repair a bit of snagged wood on the decking, tighten up the handle of the frying pan and descale the shower head. Throughout the holiday his trusty gaffer tape was used daily to repair holes in rubber rings which were essential for the lazy/crazy river in the pool area.

As we sat at the table on our first night, finishing the wine and eating After Eights (who’d have known they’d have them in France, Apres Huit?), Dougie pondered why he had decided to become a GP and not a surgeon, being so keen on fixing and taping things. I reminded him of all the curtain poles in our house which he has, without fail, always cut too short.
“Ah”, he mused, “fair point”.