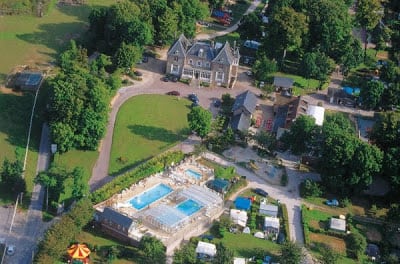 If you haven’t already chuckled at Day One of the holiday then have a look here.

Discovered last night that caravans can get quite chilly at night if you leave the windows open. Woke up freezing and had to yank the sheet back from Dougie who had hogged it. Wish I’d brought the duvet with us but there were plenty of fleecy blankets so piled them on a few hours too late.

Ventured outside and the warm air hit me. It really was a beautiful campsite: plenty of space, trees and a pretty chateau in the grounds. A few nettles and weeds had poked up between the steps of the decking but Ray Mears had set to with the bread knife the evening before so my ankles were safe.

It was on the decking, as I stood nursing a steaming mug of tea, that a revelation appeared before me. When you imagine meeting another blogger for the first time you anticipate a conference maybe or an organised parent/child meet-up. What you don’t expect is to see Tim from Bringing up Charlie walk past with his children, having just left the next-door caravan. I felt rather underdressed, standing there in pyjama bottoms, hoody and sporting bed hair. I caught his eye and said,

Fabulous first words, don’t you think? Up there with “Do you come here often?”.

Poor Tim looked across at the strange woman talking to him and looked understandably bemused. I introduced myself, “Erm, Trish…Mum’s Gone to?” and then wondered why I hadn’t just watched him go on his walk then introduce myself later once I’d showered!.

So how does a mummy blogger greet a daddy blogger? Did we race across the grass to exchange hugs and air-kisses? A shake of hands maybe? No, I was rooted to the spot on my little decked podium, clutching my tea whilst waving to Charlie and his sister, Sally. Neither Tim nor I knew the other had been offered a Eurocamp courtesy break, never mind the fact that we were given a choice of dates and sites so the chances of us turning up at the same place at the same time were pretty small.

Later on, once dressed,  I met Tim’s lovely wife, Sarah and introduced them to my family. Rather odd I suspect for my husband and Tim’s wife who both must have thought, “Oh God, another blogger” but they seemed to take it in their stride. Rather surreal was the fact that back in the UK we only live half an hour away from each other, have never met and yet have several mutual friends. Yet here we were in Northern France saying Bonjour for the first time.

Tim will be writing on this subject today so if you want to read his take on the most famous encounter since Dr Livingstone bumped into Henry Morton Stanley near a waterfall then pop over to “Bringing up Charlie”. 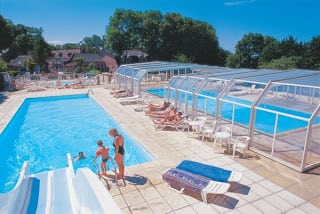 As the heat increased during the morning a visit to the swimming pool was a necessity and here I thought I had boxed clever. Before the trip I had been most impressed with Eurocamp staff whenever I contacted them. Whether via telephone or email, they were efficient and extremely helpful. I even tested the online live chat assistance, typing in my question about whether swimming shorts were permitted at the campsite. As expected with French campsites, the answer was no, only proper trunks for men. So one afternoon before the holiday I had to buy trunk-type shorts for Hubby and son. Neither of them were happy with this so had them rolled up in their towels when they ventured to the pool area, only to find everyone in the pool was wearing long baggy shorts, save one rotund chap whose teensy bit of lycra only just covered his modesty. The no-shorts rule obviously wasn’t enforced by the camp owners. The lycra trunks I purchased for my two chaps remained unused, surprise surprise! (Photo courtesy of Eurocamp)

The afternoon was spent visiting the nearby resort of St Valery sur Somme which was only five minutes drive away. A long promenade, medieval walls, a drink in an outdoor cafe watching the world go by; it was perfect.

Our teenager was slowly adjusting to the lack of TV and computer; his wicked mother making him go cold turkey for the four nights we would be away. In the summer the campsites have more teenage-oriented activities but at this time of year everything was quite low key. Rory was fine. In the evening he and Bear Grylls lit the barbecue, poked it with sticks then afterwards knocked tennis balls about. We let him have a decent shandy, I got tipsy on the wine then son cruelly took a photo of me flaked out on the bed. What would the neighbours think?