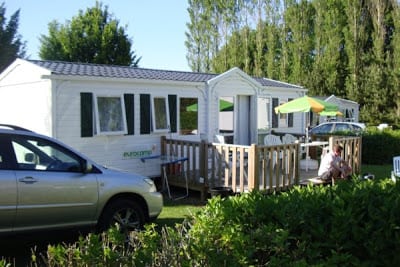 “All we need is money and bum wipes”.

This startling announcement, said on the morning of our departure by my husband, Dougie, as I wittered on about what we might have forgotten, sums up our family’s habit of forgetting to take vital items on holiday then having to buy them, coupled with our inabilty to manage without a stock of moist toilet tissue to hand. I could have suggested the ‘all we need’ speech include passports, EHIC insurance cards, travel and accommodation vouchers and also the fact that in dire need we could purchase said bum wipes, but he was focused on the manly art of boot-packing, so best leave him be.

The offer of a free holiday with Eurocamp was accepted with great delight in in our house. I was very happy to review one of its French campsites as, strangely enough, we had already booked our summer break with its sister company Keycamp. Having experienced a Keycamp holiday when Rory was about 5, we knew it had been a good choice for us then. We were hoping for similar experience with Rory now a teenager. So this four night stay at a campsite of our choice would be a great dry-run.

Our holiday in the summer will be in the Dordogne so for this mini-break a site a little closer to  home was chosen. Domaine de Drancourt, in the Picardy region, is about an hour and a half’s drive from Calais, so certainly manageable in a day from South Lincolnshire.

We paid an extra £42 to use Eurotunnel rather than the ferry: well worth it in our opinion. All you need to do is turn up half an hour before departure, park in an area you probably shouldn’t (oh, sorry, that’s just us), then follow the cars onto the train assuming when you’ve picked the ‘Under 1.80m ‘ queue that the height of your vehicle is actually under 1.80m, sigh with relief when it seems your car is 1.72m, curse the fact that you’re behind a Belgian workman with 6ft of skirting board poking out of his boot (oh that’s us again) then half an hour later clatter out of the train straight onto the motorway. Sorted.

A wonderful drive on French roads (pure delight) then we arrived at the campsite, dead on time for the 3pm check-in. We waited in the Eurocamp office and I noted a ‘VIP’ next to my name which I thought a little extravagant but made sure the boys were made aware of my new status. A few minutes later a young lad cycled up and looked rather wide-eyed and scared as I said who I was. He then uttered these words of welcome with the drama they so deserved:

“Your chalet isn’t ready yet. The people in it before you COMPLETELY TRASHED IT”
“What do you mean ‘completely trashed it’?”
“OH IT’S BAD”
“How bad?”
“REALLY, REALLY BAD. A TERRRRRIBLE STATE. WE’VE BEEN CLEANING IT FOR HOURS”
“So, erm, what about the toilets?
“OH YES, OH THE TOILETS…A COMPLETE MESS”.

At this point Dougie looked as if he were about to replicate the recent volcanic eruption in Iceland. Apparently there were no other mobile homes available and we would have to wait until 4pm before it was habitable.
“So, do you want to go visit St Val for a bit?”  our cheery rep suggested.
No we bloody didn’t. We did, instead, wander over to the chalet ourselves and found a nice young lady busy cleaning our 3-bedroomed superior-with-decking. Decking was piled up with rubbish including a man’s shoe, but on peering through the door the sight was hardly the Barlinnie dirty protest that we had imagined. She indicated that the previous occupants had left a lot of rubbish but there wasn’t any hygeine issues so she’d be done in another 40 minutes.

By 4pm our chalet was ready and our doom-merchant pedaled in front of the car to guide us to where we’d just been. The place looked fine: better than fine. It was clean, tidy and very spacious for a caravan. We had a good look round and saw the sheets and pillowcases which had been provided for us. Normally we would have taken our own linen but as Eurocamp were offering us their linen pack free-of-charge, we accepted it, purely to find out what it would be like. Pity only one pillowcase per person (yet two pillows?) and towels which involve a choice of whether to cover bum or boobs adequately, but hey ho, things were looking up. Then Hubby asked where the beach/pool towels were.
“Oh we didn’t get a delivery this week”
Great. So would we be allowed to take the normal towels to the pool? Oh yes. Well could we have some extra bath towels then? Oh I’m not sure, I’ll have to ask the site manager.

We gave up at this point, shooshed the poor lad out of the door and then the hunter-gatherer instincts of Dougie came to the fore. One hour and one supermarket visit later and my man returned with wine, beer, meat, prawns, pastries, salads and two fetching neon-coloured beach towels.

Wine was poured, the barbecue lit, the evening sun was warm and we sat on our decking and began to relax…