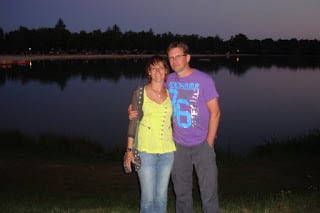 After 10 mostly sunny days in the Dordogne we left our campsite in the pouring rain. This was a case of deja vu from our holiday in June when it was so wet on our last morning, Dougie packed the car dressed only in a towel. He kept his clothes on this time which was probably just as well as the poor man slipped on the steps of the decking (tsk, they did warn us in the Health and Safety booklet) and fell heavily on his, thankfully, trousered behind. I would have cried if it had been me, but a few choice words from the man and all was well.

The final leg of our trip consisted of three nights in another campsite in the Loire Valley, Parc des Alicourts. In hindsight I wish we’d had a week in each as I adored this place:  a huge lake, beautiful beach, a proper lounge and bar area with cocktails. In essence, I could pretend I was in the Mediterranean in a classy hotel…..until we had to toddle back to the hut. But I was getting used to caravan-living and even the distinct whiff of pee in the toilet couldn’t spoil my enjoyment. 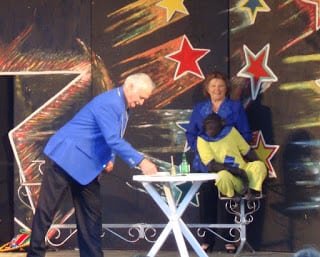 The highlights of our short stop here included evening entertainment on a proper stage. The usual kiddie disco, in which thankfully we no longer have to participate, was followed by a pitiful miming of The Lion King on one evening. However we were lucky to catch the travelling circus one night which had….wait for it….real animals. I know it’s not the done thing any more in the UK to have them but everyone lapped up two performing chimps who drank beer and did handstands. They were followed by a selection of goats whose ‘trick’ was to walk up lots of winding staircases. The most sure-footed animals on the planet, used to perching on hanging rocks, but the happy campers cheered nonetheless. 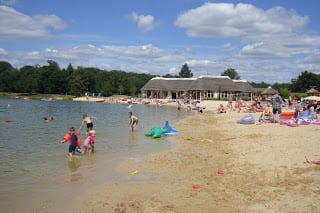 A day on the beach was glorious. I had forgotten how much I love being on a beach: immediately I was taken back to my early years living in Whitley Bay. The boys messed about in the water on rubber rings while I slurped a big Magnum with more pleasure then usual as the day before we had been told off for eating ice-creams by the pool! Never heard of anything so stupid: two adults and a teen being chastised for eating the very items they advertised on a big board in the middle of the pool complex. 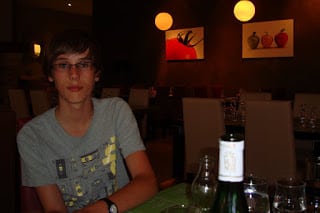 After a day at the beach we were more than ready for a meal out. Bugger the barbecue, we needed pampering. Wow this was some campsite restaurant. While most families chose to eat on the terrace we, being awkward, decided to eat inside in the very chic dining room. Dougie’s scallop starter was quite stunning and though we laughed at the translation of Canard Parmentier as “Cottage Pie with Duck”  it was bloody lovely. One the first night I had ‘Three-chocolate profiteroles’ for pud and couldn’t move afterwards so on the second night decided to stick to coffee. I plumped for a Cafe Gourmand not knowing what it was. It arrived: a glass of espresso coffee and a tray of yummy delights: a mini Magnum Moment (which Rory snaffled), a chocolate truffle, chocolate biscuit, tiny creme brulee and a little lime-coloured macaroon. Now why didn’t I take a photo of that instead of the chip pizza.