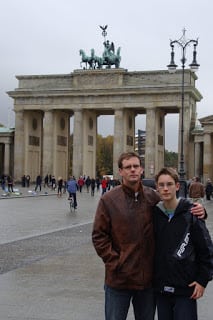 It’s raining. That persistent drizzle, not heavy enough for an umbrella but the sort that leaves your hair frizzy and your demeanour miserable. I’m not good with rain. I’m not that good with cold and wind either. Get a grip woman, you’re on holiday. We leave our lovely room, warm duvet and coffee machine and head out for some sight-seeing.

The walk up to the Brandenburg Gate is very manageable from our hotel. We have a few side roads to cross and soon discover the Germans are very obedient of their traffic signals. We get a few stern looks as we nip over the road with the red man still flashing and decide to behave ourselves for the rest of the walk, which is probably just as well as I am the world’s worst road-crosser: all last minute dashes which must put the wind up drivers.
The new embassy buildings around the Brandenburg Gate are spanking new: Berlin’s post 1989 showcase. Quite astonishing to think we are standing in what used to be No-Man’s Land, where desperate East Germans were shot in their attempts to reach the West.
The Reichstag is next, a powerful symbol of the German Reich. Though it was destroyed by arson in 1933 and bombed during World War II, the reconstruction by Sir Norman Foster has transformed it into a stunning, modern parliamentary building. A popular tourist attraction, the queue to get in is long and, unfortunatey, stationary. Conscious of our family inability to wait more than ten minutes for anything, and the feeling of dampness at my neck, we avoid a domestic incident and continue our walk. 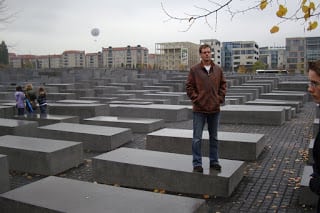 The most haunting part of our day is spent at the Holocaust Memorial. Prolonged controversy surrounds the construction of this impressive memorial to the European Jews who were victims of Nazi genocide. The “Field of Stelae”, a maze of grey concrete blocks of varying height on an undulating concrete floor, covers the area of an entire city block and creates the sensation of a wave-like form. The whole area is very tactile, in fact very family friendly. There is something quite heartening to hear children laughing, playing hide and seek between the pillars. That seems appropriate to me.
The remainder of the day is spent walking too far. An interlude at the New National Gallery is a high point for me and offers some relief from the drizzle. When we eventually flop back at the hotel, Hubby decides to go on a “crisp and wine” expedition. He is away for ages, having found it nigh on impossible to hunt out a supermarket in the vicinity. He’s nothing if not persistent and returns triumphant, having crossed Alexanderplatz with a bottle of wine in each pocket…that’s class!