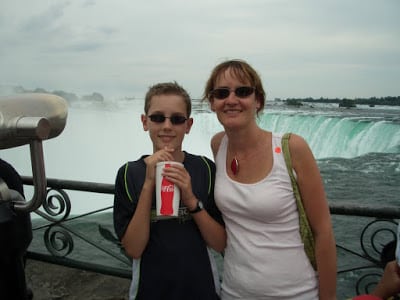 Only a few feet away from Niagara Falls…
Up early today as we are going on our one and only bus trip of the holiday; from tomorrow we pick up a hire car and travel around ourselves. Slightly nervous about a bus trip in Canada as it is only days since one unfortunate chap was decapitated by a fellow passenger on a Greyhound bus in Manitoba. I reckon the bus company must be feeling pretty embarrassed about a series of huge bill posters they have all over the city here:

Anyway, Arthur looks after us very well at breakfast as we get through a ton of bacon, pancakes and maple syrup. As we get up to leave I notice a piece of white material at my son, Rory’s feet that he seems to be kicking along as he walks. Initially I think it’s a napkin and then it dawns on me that it’s a pair of white cotton boxers that must have remained up the leg of his shorts when he took them off the night before. They’ve now worked their way out onto the floor of the dining room. Quick as a flash I scoop them up and shove them in my handbag, along with a banana and a couple of bread rolls I’ve already snaffled from the buffet. Husband Dougie is very impressed by my ability to get a pair of undies off the floor and into a handbag with such speed and sleight of hand…..”Done that before, love?”, he smiles.
A small minibus picks us up; only about a dozen other passengers so I can check them out to see if there are any knife-wielding crazy people on board. Our driver and guide is an old chap called Fred Breeze and God help us but does he like to talk! We call him Fred “Shooting the” Breeze. He’s obviously been doing this for years as he speaks without a script and has a head full of facts and figures. For every town we go through we get to know when it was established and its population. Every mountain, river, lake is given its dimensions in imperial and metric. Exhausting.
Our first stop is the chocolate box town of Niagara-on-the-Lake. It’s one of the most beautiful little towns I’ve ever seen: picket fences, sweet shops, masses of flowers everywhere. It’s famous for having the Shaw Festival and there are three theatres all very close to each other which put on plays during the three month festival period. I decide there and then that when Rory has left home I’m going to come and live here during the summer months, acting in their plays….bring on those character roles! 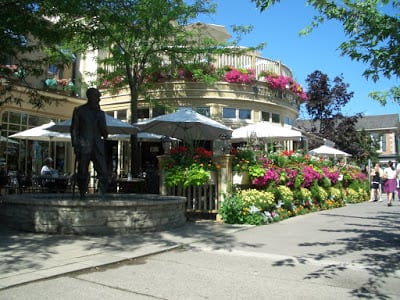 Niagara-on-the-Lake…….I want to live here!
Fred only lets us have an hour here before we’re bundled back on the bus. A few more stops for looking at whirlpools and hydro-electric dams and we are ready for lunch. It’s only when we’re in the dining room of the hotel having lunch that we eventually get to see Niagara Falls. I can’t help but feel a bit disappointed. Yes, they’re big and look powerful, but somehow they look manufactured. The whole area around the Falls is very commercialised; heaving with people, lots of huge hotels and a whole street full of amusement arcades and rides, reminiscent of Blackpool. That’s not to say I don’t enjoy Blackpool, but when we saw waterfalls in Iceland they looked awesome because you could see nature at work in the rugged landscape. This is all a bit tacky and spoils the whole “power of nature” experience. Thankfully there are some views of the falls which show their beauty… 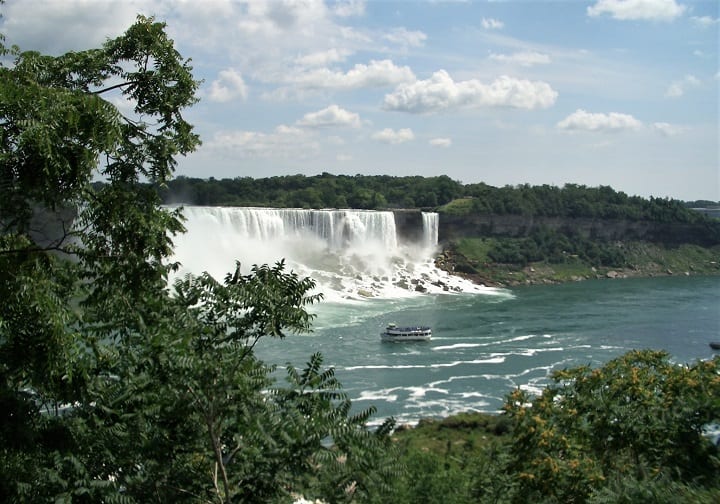 We are booked to go on the Maid of the Mist boat trip which takes passengers right into the heart of the falls. From afar the boats look tiny, filled with little people wearing their blue raincovers. When we get to wear our plastic macs and go on the boat it’s actually quite exciting….and very wet as the spray from the waterfall goes right down your neck if you haven’t tied the mac properly (which we haven’t).
Fred regales us with plenty of stories about people surviving the falls, often in barrels. Later on when we stop for a coffee (we get one free as the poor woman has difficulty understanding my Scottish husband again!) we see an empty wheelchair sitting by the railings. Both Dougie and I laugh as it occurs to us both that this would be a great Little Britain sketch with Matt Lucas as Andy running from his chair to leap over the falls in a barrel….well..er..you had to be there!
Last stop before we return to Toronto, wine-tasting at Lakeview Cellars. Dougie and I nearly miss the first glass as we’ve run off to find the loo (what is it about holidays when the whole pattern of the day is determined by when and where the next pee stop is? I’m sure we can last longer than this at home but on this trip we seem to be in search of toilets every time the bus stops!). The best wine is something called Icewine, which is a very sweet syrupy concoction made by squeezing the grapes when they are frozen in the winter. Costs a lot more than nomal wine because it takes 30 times more grapes to get any juice, but it’s gorgeous. Dougie and I feeling very mellow at this point so buy two bottles to take home. Stagger happily back to the bus and thankfully Fred gives us all a break by keeping his mouth shut for the journey back to the city.
August 2008