In the car, when I’ve not got my nose in a map, attempting to second guess or counteract the efforts of our hormonal Satnav, I try to look out of the window as much as possible. On our journey ‘oop north’ last week,  the signposts caught my eye, even more so as we travelled into Scotland, with memories of the stern warning that ‘Twenty’s Plenty’ on a previous visit.

Dougie whooped as we drove across the border into his homeland, via the town of Coldstream which markets itself as ‘The First True Border Toon’. We didn’t stop to get out so he could pose by the sign or have one foot in each country, though we did wonder whether we’d need a passport to come here in the future. If the vote is yes to independence, will they ever let Dougie back in?

Further up the road, the town of Greenlaw stands proudly on the River Blackadder. Of course, all I can think about is Rowan Atkinson and the TV series but then, if I’m thinking that, surely there must be other people who think the same. Does the town make the most of its link with the TV programme? The pub is named ‘The Blackadder Arms’, which is encouraging, and I noticed there was a ‘Blackadder Mini-Market’. But the local chippie has the rather unimaginative name, ‘The Chip Shop’. Surely they could call it ‘Baldrick’s Battered Bream’ or ‘The Flashheart Fryer’?

Onwards to Edinburgh and as we approach the main city bypass there is a huge sign:

Edinburgh City Bypass
– no cyclists, horse-drawn vehicles, pedestrians and animals.
I’m sure this must be something to do with the road not officially being a motorway, but to have a picture of a horse and carriage underneath the sign does seem rather archaic. I don’t remember seeing this sign on other dual carriageways in the UK.
Our favourite sign of the whole week, however, was spotted just a couple of miles from where we were staying in Kenmore, Perthshire. 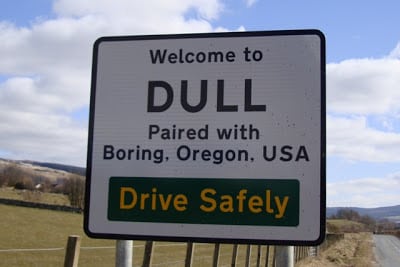 The story behind this fairly new sign is that Elizabeth Leighton, resident of Grandtully, Perthshire, passed through the town of Boring on a cycling holiday in Oregon. She told her friend, Emma Burtles, who lives in Dull and the two thought it would be a great idea to somehow link the two towns. They can’t officially be twinned, as Boring is too big, but Steve Bates, the chairman of the Boring Community Planning Organisation and Marjorie Keddie, chairwoman of the Dull and Weem Community Council, worked together in 2012 to make the pairing happen. The sign was erected in June last year and a street party was held for the 84 residents of the tiny Dull village. The two communities are tentatively getting to know each other via the Dull and Boring Facebook page. I gather this new sign is causing quite a stir with American visitors very keen to see it. One tourist took a taxi to see the sign…..from Edinburgh… 75 miles, 1 hour 40 minutes drive away.