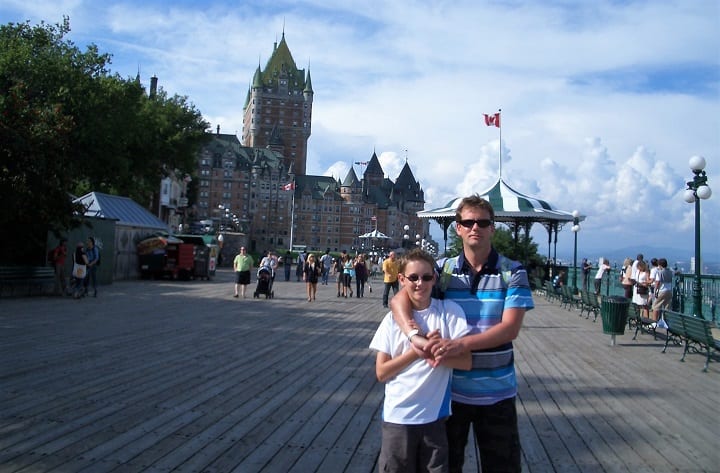 This is my final post in my special guide to Canada for the royal couple. Final because after Quebec today I have no knowledge of the other bits of Canada so best shuffle off and leave them to it.

All I can say is I do hope William brushes up on his French now he is in Quebec as this story below is a warning to him:

An hour or so into the journey from Ottawa to Quebec City and it seems hours since breakfast so we start looking for somewhere to eat. As usual we drive past plenty of suitable dining options because we’re “not sure” until we’re desperate and plump for a place not half as nice as the dozens we’ve already passed. However this place does look cheap and cheerful and has signs saying PIZZA so it will suffice. Having had a week’s worth of smiling “How can I help you, Sir?” americanised charm, we suddenly realise we’re in French territory now and a Gallic shrug is our welcome. Rory decides he would like a hotdog and that seems simple enough: the international language of fast food should help us out here.

“Oui”, says our waitress at the counter, then follows this up with an incomprehensible question which sounds like “schrweeveeooroowerstee?”

I’m flummoxed. I have no idea what she’s saying. She stands and looks at me and just repeats the question, with no attempt to make it easier with any hand gestures. I seem to recognise the word “ou” in the middle of the phrase, it being the French for “or”, so I presume she is giving me some sort of choice pertaining to the hotdog.

“Maybe it’s with or without onions?”, Hubby offers.

“No, it’s not that, I know the French word for onion, it’s oignon!”

“Avec une baguette?”, I say, wondering whether she’s asking if he wants it in a roll or not.

Not being that knowledgeable about the intricacies of hot dog cuisine, I’m at a loss. The waitress then turns to the three evil-looking cooks, brandishing their pizza cutters, and asks if they can translate. All three of them look at us as if we’ve questioned their parentage and say, “NON”.

I’m about to give up and just order a pizza when a knight in shining armour gets up from a nearby table and says,”How can I help you folks?”. My hero, an English-speaking Canadian who isn’t about to boil me alive. I explain the dilemma and the watiress repeats her question.”Oh, she wants to know whether you want your hot dog steamed or roasted?” To be honest, I’m still unsure how to reply and have to ask this nice chap what is the more usual method of hotdog preparation. Apparently it’s steamed! So steamed is what we order.

Our helpful diner then tells us that we’re off the beaten track, they never get English speakers in this part of Quebec state and certainly never people from England itself. Dougie is not happy staying here a moment longer than necessary as we’re not “local people” and he reckons we could be lynched. Rory’s schrweeveed hotdog is shoved down his gullet at speed and we hot foot back to the car, turn the SatNav back on and follow her bossy directions to Quebec City by the quickest route possible.