As this is a fly-drive holiday, time has now arrived for the driving bit. The company we organised the holiday with have provided us with a big folder full of information. We have to get a taxi to the Alamo Car Rental place, pick up the car and drive about 3 hours North to our next stop, Huntsville. This would seem easy enough but the directions in front of me are from Niagara Falls to Huntsville. Some fool has forgotten we took a bus tour to Niagara yesterday so what we actually need are some directions from the middle of Toronto where we pick up the car!

We are expecting a Pontiac G6 “or similar” and the “or similar” is what we get, though how a little boxy Chrysler Cruiser can be similar to a Pontiac is beyond me. But it’s that or nothing and it looks fairly new, plus we can squeeze all our bags in the boot (sorry, trunk!). Thankfully we have pre-booked a satnav, which considering the lousy map directions, is sounding like a good investment. While Hubby sorts out the paperwork, I sit with the satnav and manage to key in the address for our next stop. Both feeling extremely nervous as it’s always very stressful driving a new car for the first time, particularly on the wrong side of the road, adapating to new mirror positions etc. The garage is located on Yonge Street which is apparently the longest street in the world and, I quote, “one of the busiest traffic arteries in Toronto”. Great.

As we pull out of the garage and start to move, we wait for our lovely satnav lady to tell us what to do…..

Thankfully he manages to turn into a fairly quiet street where we park up and I alter the language on the GPS so we can have a nice English woman to swear at. However, the journey doesn’t get any easier. As we hit highway 400 out of the city we realise it’s 6 lanes in both directions. The stress levels and language reach unprecedented levels. Satnav woman does that annoying thing saying “keep right” which isn’t quite the same thing as “turn right”, so we keep shouting at her, hoping she might just say, “Yes, folks, I know there’s an exit ahead but you just keep in this lane and don’t come off yet!”.

After an hour or so the pressure eases off and we start getting into moose country: lots of places
selling sweet corn, country and western music on the radio and a surprising number of signposts for naturist resorts, including “Bare Oaks Naturist Park”. “Bare Ar**” would be more appropriate we think. 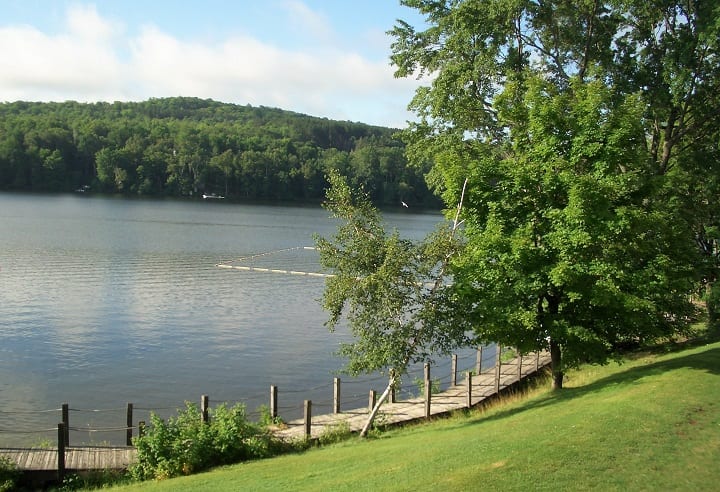 When we eventually reach Deerhurst Resort, a sort of Center Parcs place, our legs are wobbly and our nerves in shreds but we’re alive. Due to my schmoozing the reservation staff a few weeks ago, we have been upgraded to a lakeshore room with balcony. The sun is shining, the view simply beautiful, and my caffeine fix awaits. It’s not long before I’m lying on a sunbed by the lake and the boys have got over-excited by the Splash Zone in the lake: a huge area full of inflatable trampolines and climbing walls. They get kitted out with life-jackets then thankfully leave me in peace for an hour, though I do the obligatory waving from the bed now and again to show willing.

Change for dinner and then the heavens open: thunder crashes, lightning strikes, rain pours down. In our upgraded room by the lake we are now about ten minutes walk from the main building and dining room……where our original room would have been! Hmmm, not so clever now am I?