Shame we have to leave the relaxing part of the holiday behind and set off for our next stop, Ottawa. Quite a long drive but hopefully not too stressful as we’re taking the scenic route along Highway 60 through part of the Algonquin National Park. This national park is part of the Nipissing District of Ontario. It may be “Ni pissing” for them but I need to stop fairly shortly after all that coffee at breakfast!

Apparently this is also bear country and I tell the boys I read somewhere that if you come across a brown bear you should stay still and with a black bear you should run away. But then I can’t remember whether that was the right way round: Hubby thanks me for such helpful information which should prove immensely useful if we get into trouble! However I’m more worried about some of the health hazards you can encounter when you’re in the backcountry. It says in my book you should be careful not to get “beaver fever”; well I’ll make sure I keep that one at bay!

As we get nearer to Ottawa I start boring everyone with other little gems from the guide books I have with me. One book says Ottawa, although the capital of Canada, has been dubbed one of the dullest cities in North America. Great, we’re spending two nights there. Should be fun!. In 1864 Queen Victoria had to decide which town should become the capital and legend has it she picked Ottawa because of a watercolour painting she admired of the countryside outside the city. A more likely reason is its position between the English and French populations. Rory has plugged in his ipod at this point and I take the hint and shut up for the rest of the journey. 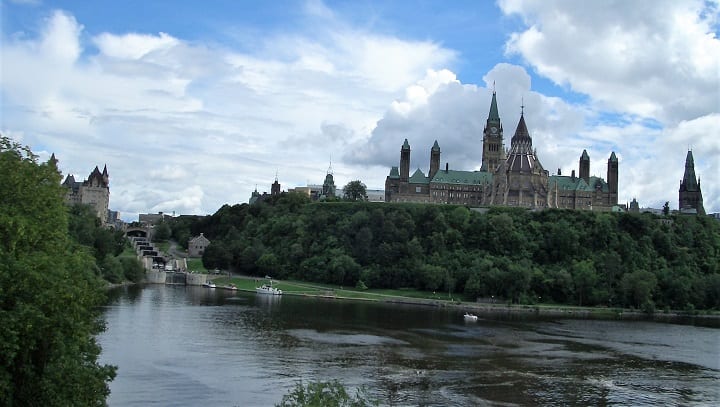 Ottawa, despite our concerns, is a lovely city: a mix of London and Edinburgh with some very British parliament buildings. Our hotel, the Lord Elgin, is bang in the middle of the city and is an Art Deco style building. We only manage a quick look around the vicinity before the 5pm thunderstorm takes hold. We race back to the hotel and watch the storm from the window. It clears up fairly quickly and we find a fab Italian restaurant called Johnny Farina’s. Great cheap meal once again and the service is impeccable. Yet another waiter has a Scottish relative; a grandfather from Edinburgh this time. Starting to dawn on us that this may be a very clever ploy to get extra tips: every long-lost relative is worth a few dollars more. They expect 15% or more in Canada and you get the feeling you can’t just round the bill up by a few quid. Still the service is fantastic, all smiles, lots of iced tap water brought to the table everywhere you go and great value food so we are quite happy to be generous. Though our waiter takes the biscuit when he says he is collecting foreign coins and have I a pound coin he could have? Without a thought I rummage in my bag and hand over a coin. He offers to pay for it but I wave him away as if he’s a little lad adding to his stamp collection. What was I thinking?!