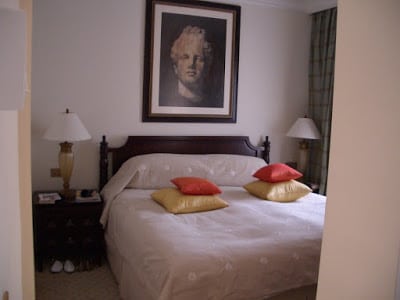 I know, I know, I’ve only recently come back from Paris and now I’m off gallivanting again. Look away now anyone who can’t stomach another dose of holiday news. That’s just my mother still reading then…..

We planned this Easter jaunt a few months ago when hubby was so weary with work that he gave me full access to his credit card to book us a family holiday somewhere sunny and relaxing. Cyprus seemed to be a good choice, never been before but good chance of decent sunshine in April. We’re flying from East Midlands airport and apart from a bit of a spat over which car-park I have pre-booked and hubby complaining that the spaces are too narrow, the actual getting there and checking in procedure is smooth. The flight is at 9am so we manage to get breakfast before boarding: a fantastic three sausages in a bun deal for £3.49.

Feeling very chilled at this point I decide I really need a magazine to read on the plane. Hubby bit agitated as we’re due to board but I wander off as he chunters “You’ve had weeks to buy a bl***y magazine!”. Of course there’s too much choice and each one has a freeby with it, so rather than pick a magazine I’m likely to read, I’m swayed by free bars of chocolate and tote bags. Quite tempted by the free flip-flops with Company mag but fear everyone else on holiday may have had the same idea and there’ll be hundreds of us by the pool all wearing these gold plastic one-size-fits-all beauties. In the end I grab Red but have to run to the gate where husband is having a funny turn because everyone else has gone through.

The flight is about four and a half hours and we reckon we will get lunch on board but unfortunately they’re providing breakfast. So having stuffed three sausages down our neck before boarding, less than half an hour later we’re peeling back the metal lid of the “hot meal” to display yet another two sausages. Then there’s the usual flight information, with particular warnings as to the affect alcohol can have at high altitudes, followed swiftly by their super-duper special offer of champagne and chocolates! On top of five sausages? I think not.

The baggage reclaim at Paphos seems to take an age and hubby is wedged between members of a dopey family who have a complete inability to identify their own luggage, picking up everyone else’s and then allowing their own case to travel three complete circuits of the carousel before spotting it belongs to them. A taxi ride takes us to our hotel, the Aphrodite Hills Resort and WOW it’s gorgeous. It’s all a bit posh and the porters are fussing about which makes us feel a bit uncomfortable. I seem to be unable to just smile and be gracious; I cover my embarrassment with incessant small talk. Hubby, who has gone all silent, would rather heave our luggage over a three-mile assault course rather than accept help from staff who are paid to do it but in the end he has to relent and our bags disappear on a golf buggy to our room. We are also whisked away on a buggy to the “club” part of the hotel where hubby now discovers how his wife has spent his hard-earned money! I had got a bit carried away upgrading the room and we have a junior suite for the three of us with our own private pool.

Son and I immediately throw our stuff down, find out what channels are on the telly and run around the room testing things out. Mr Organised however has to unpack all his stuff before he allows himself to start thawing out.