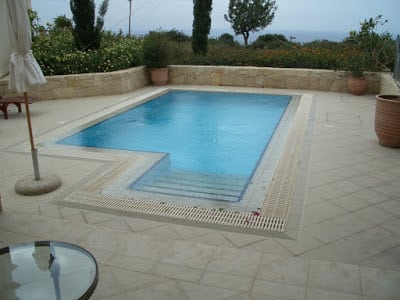 Our lovely pool….and it’s heated!
Wake up this morning after a miserable night’s sleep caused by the excesses of alcohol, food and a mozzie in the room. It all started at the club lounge’s happy hour. This club thing I have upgraded to has certain privileges: its own room for breakfast, free coffee and soft drinks all day and cocktails with canapes between 6pm and 8pm. I had visions of the cocktails being some very diluted pina colada but, to our amazement, it was actually a free bar for the club clients. Along the bar were bottles of spirits, beers in the fridge, wine in the ice bucket. We were told to just help ourselves. Very dangerous. Hubby asks how much I’ve paid for this privilege but I can’t remember: I’m not sure which part of the extra payment was for the free drink and which was for the private pool or the sea view. Hmm! Best just make the most of it then. So I help myself to a generous G&T whilst hubby commits that heinous crime by mixing the grape with the grain: white wine with a whisky chaser.
The canapes go down extremely well too so we’re not exactly hungry by the time we stagger to dinner. A choice of restaurants but some a bit too fancy and, with a 12 year old in tow, best go for the buffet option. The buffet is huge and as it’s Italian Night, we wander up and down all evening filling our plates until, after my fourth pudding, some sort of creamy tiramisu, I honestly think I’m going to explode. We fall into bed feeling pretty bloated but both wake with a start at about 1am because there’s something buzzing in the room. A restless night continues as it’s too hot to hide under the duvet to avoid being dive-bombed. In the end I find a hanky over the ear seems to stop me at least hearing the blasted midge/mozzie thing: thankfully they usually go for hubby so I’m probably safe from being bitten!
After a somewhat smaller breakfast the rest of the day is spent lazing by the pool. Our resort is very near Aphrodite’s rock, a little outcrop just out from the coast where the goddess of love and beauty apparently emerged from the sea. I tell hubby that legend says if you swim naked round it three times at midnight you will surface 20 years younger. His response: “Shame you can’t swim, love. Might be worth getting you some lessons”. Cruel but unfortunately true. My swimming ability is nil. I have tried very hard but I’m just not a natural in the water. This pool suits me fine though, it only comes up to my shoulders so I can put my feet on the bottom at any time, and it is only 15 feet long, which is about the length I can swim before my lungs give out. I breathe out, then am incapable of breathing in again so after three strokes I have to scrabble to the edge. The whole sad scene isn’t helped by the ridiculous bikini I’m wearing. It looks lovely because the padded bra gives me a cleavage which really shouldn’t be allowed under the Trade Descriptions Act, but in the pool the foam padding fills up with water and starts to pull away from me, dragging me under even more. I decide to give up the pathetic effort and sit on the side instead. Maybe if we go to Aphrodite’s Rock and I just dangle my feet in I will emerge five years younger? That would do for starters!
April 2008