At 8.15 am on 6 August 1945, an atomic bomb, code-name ‘Little Boy’, was detonated above the city of Hiroshima in Japan. The explosion caused thousands of deaths on impact and thousands more in the aftermath, from burns, radiation sickness and other illnesses. There was a further nuclear bomb on 9 August which devastated Nagasaki. Japan surrendered to the allies on 15 August.

As part of our tour of Japan for the Rugby World Cup, we spent four nights in Hiroshima. That probably sounds a lot for a city which appears to be an unlikely tourist attraction. Nearly 75 years after the bombing, however, it is a city full of hope. It is undoubtedly very sobering to read the engraved words on the memorials and desperately sad to see historical artefacts in the museum. The city has been rebuilt, however, with large, airy boulevards. There are galleries, a castle and gardens to explore. It’s also a good base from which to explore Miyajima Island which is a bucket list destination for many visitors to Japan.

How to get to Hiroshima from Tokyo?

Hiroshima is located on Japan’s largest island, Honshu. It’s about 420 miles west of Tokyo (500 miles by road). We took a one-hour flight from Tokyo that was included in our rugby package. You could take the Bullet Train (Shinkansen), especially if you’ve bought a Japan Rail Pass, but check what trains you can use, as it doesn’t cover the fast, direct Nozomi Shinkansen. There are other local trains and buses but you will need to compare costs versus journey times.

Hiroshima is very walkable but if you do need transport there are several bus and tram routes. If you’ve purchased a Suica Card in Tokyo, you can use it here, making the whole process very easy.

The park is located in the centre of the city, with rivers on both sides. It was constructed in the 1950s and designed to offer space for contemplation amongst the many memorials to those who lost their lives in the bombing. There’s a central pond leading to a curved cenotaph: the names of all known victims are inscribed inside the central stone vault. The people of Hiroshima are resolute in their desire for world peace. The Flame of Peace will only be extinguished when all nuclear weapons have been removed. 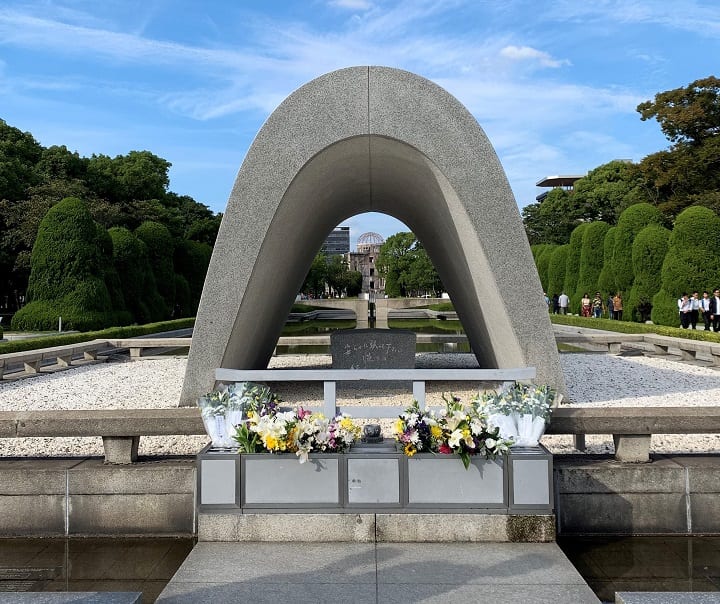 As you look through the arch of the cenotaph you can see how it frames the Atomic Bomb Dome. Originally the Industrial Promotion Hall, the bomb exploded directly above it. Those inside were killed instantly but the building, in part, remained standing. When the city was being rebuilt it was decided to preserve it in that state as a visual reminder of the destruction. It’s regularly maintained so that, despite its mangled components, it is safe. When we stopped to view the dome, I saw a crane, the Japanese symbol of happiness, perched on the ruins. 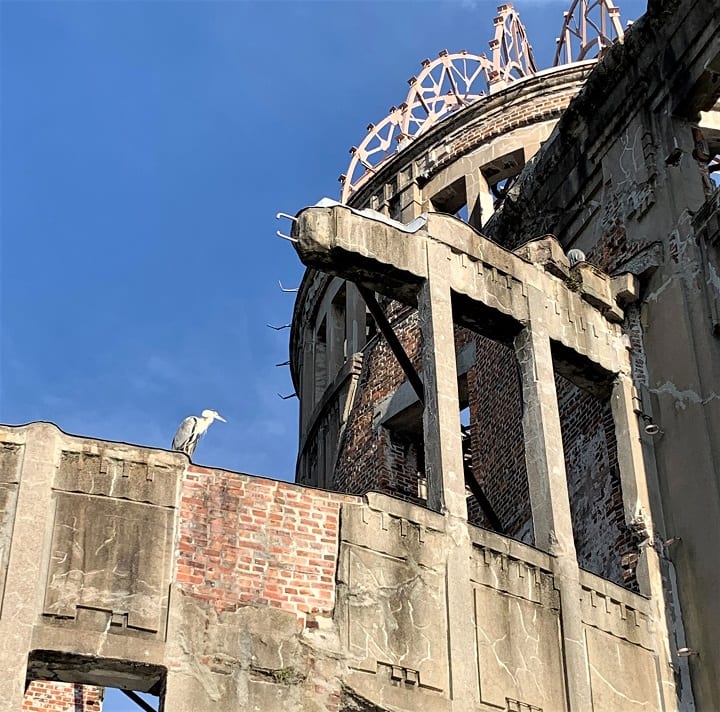 One of the most moving parts of the Peace Memorial Park is the Children’s Peace Monument. It was inspired by a young girl, Sadako Sasaki, who was two years old when the bomb was detonated. Aged 11, she was diagnosed with leukaemia. An ancient Japanese legend promises that anyone who folds a thousand origami cranes will be granted a wish by the gods. Sadako decided to try and do this, hoping she might be cured. She reached her goal, often making very tiny birds when she was short of paper. Sadly she did not survive. Her friends published her letters to raise funds for a monument for all the children who had died. It was unveiled in 1958. Her story inspired other children to fold paper cranes and this continues today. There are so many sent here from around the world that there is a database to record all the paper gifts and sentiments. Next to the monument is an area where these cranes are displayed: it’s a riot of rainbow colours. 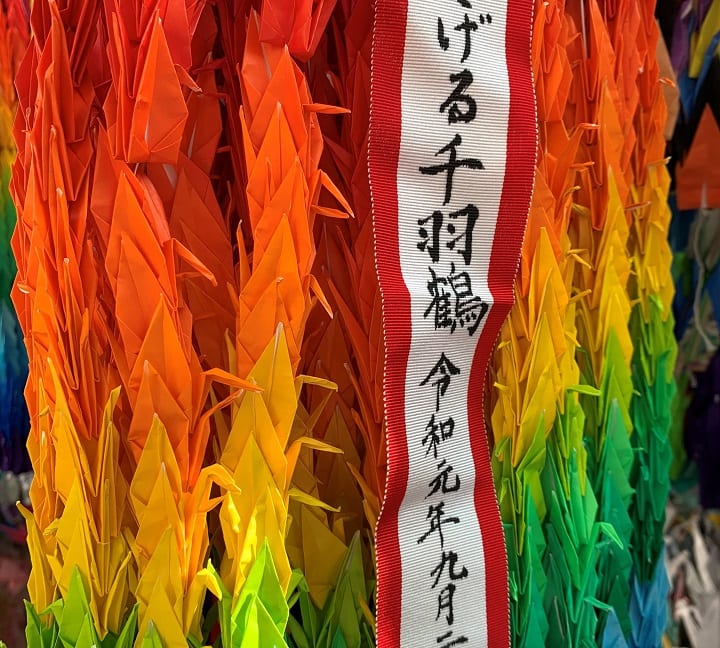 During our stay we saw a constant stream of school-children paying their respects at the monument. Poems are read, songs are sung and dozens of strings of cranes are handed over. Hiroshima’s victims will always be remembered by each generation of young people. At the base of the monument is the inscription: “This is our cry, this is our prayer: for building peace in the world”. 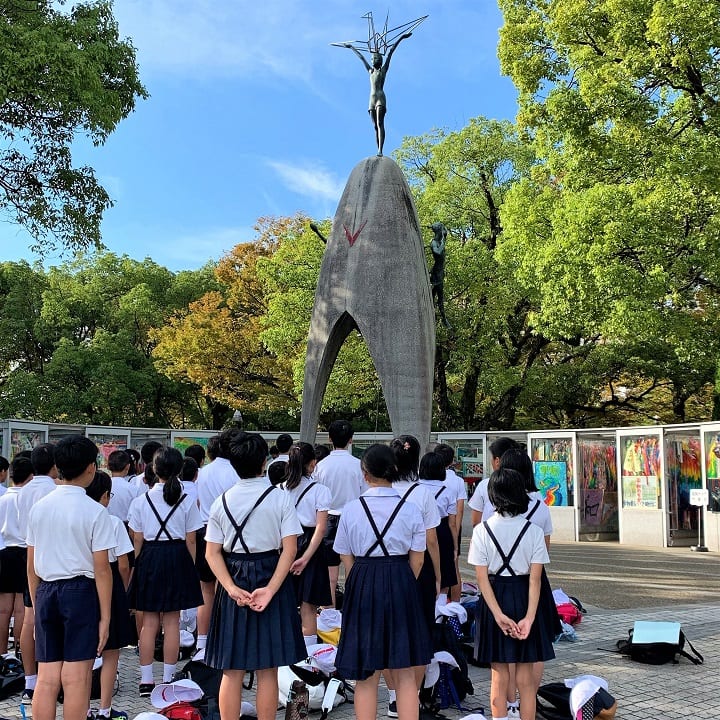 Other memorials in the Peace Memorial Park

Throughout the park we saw so many fascinating memorials.  Just looking at the Hiroshima map of the park, there are 62 specific things to see.  There is a monument to the many Korean victims of the bombing; a Peace Cairn which includes rock from Ben Nevis, donated in 1972; a flower clock; the Bell of Peace: a peace fountain; a friendship monument and Phoenix trees, transplanted here from their original location a mile away, showing scorch marks from the blast. 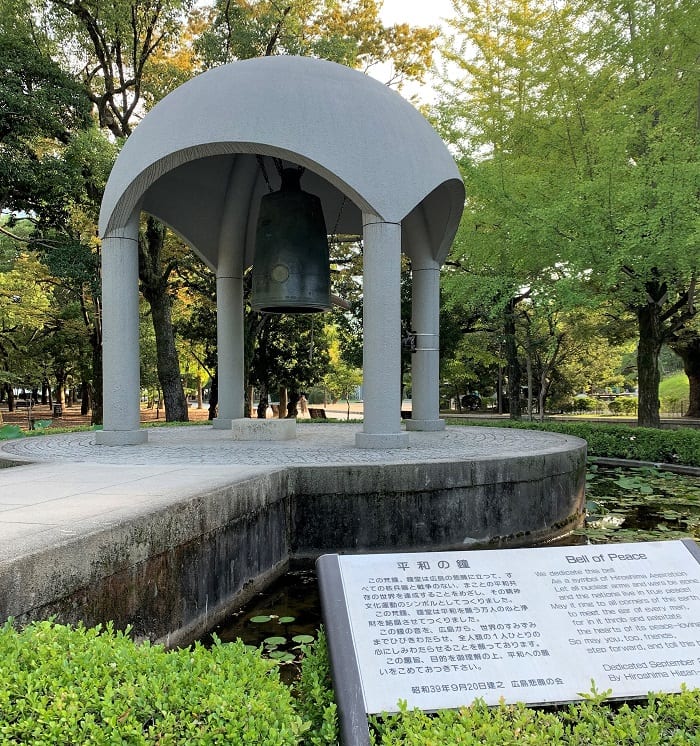 I was surprised to learn how many young people had volunteered to fight in the war. There is one monument, a beautiful tower, that reminds us that children as young as 12 had enlisted and given their lives in the conflict.

I was particularly moved by a monument dedicated to a children’s writer, Miekichi Suzuki. In 1918 he launched a children’s literary magazine, The Red Bird, which initiated the first songs and fairy tales for children in Japan. Known as the ‘Father of Children’s Literature’, he showed teachers how to encourage children’s creativity. The information next to the memorial states that it serves as a symbol of Hiroshima’s recovery from devastation and the hope for world peace.

This has recently been refurbished and is an essential focus for any visit to Hiroshima, helping people understand the politics at the time which led to the bomb being dropped on the city. It is graphic and the exhibits include many personal effects. During our trip there was a special exhibition of A-Bomb drawings by survivors. It was the idea of a local broadcasting station in the 1974; to ask witnesses to record their memories on paper for the archives. Seeing these stark illustrations of the horror that occurred was just as poignant and vivid as the photographic evidence.

Although it was destroyed in the bombing, a faithful reconstruction of this 16th century castle, also known as Carp Castle, was completed in 1958. We didn’t go round the museum or climb the tower but enjoyed wandering around the gardens, visiting the shrine and peering at the carp in the waters of the moat. 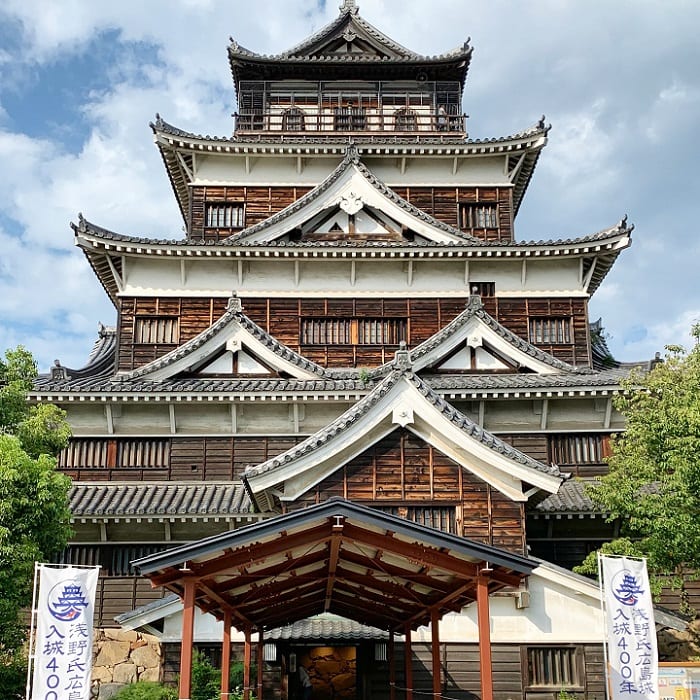 I love the unexpected when travelling. I didn’t imagine, whilst in Hiroshima, I would see a fabulous collection of impressionist paintings including wonderful examples from Degas, Monet and Renoir. The museum is very contemporary with a gorgeous little cafe in the grounds. Highly recommended. 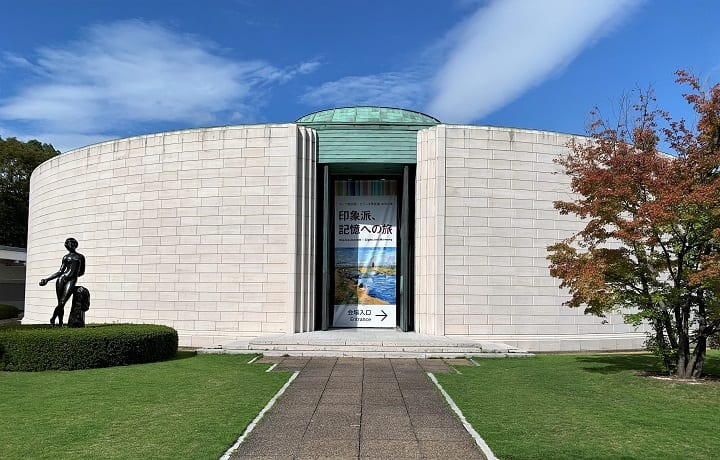 Other attractions in Hiroshima

Despite having three full days in the city, we still didn’t have time for all its sights as we had ear-marked one full day for a trip to Miyajima. The city does, however, have a Museum of Contemporary Art, the Shukkei-en garden, a children’s museum with planetarium plus other parks and museums.

I’d recommend including Hiroshima on any Japan itinerary. It can be very emotional but the city has much to offer visitors aside from the Peace Memorial Park. There’s a vibrant entertainment district, a variety of shops including department stores plus plenty of bars and restaurants. Hiroshima is a place of reflection but also a place of positivity.