It’s Saturday 12 October 2019. We’re in Tokyo waiting for Typhoon Hagibis to hit the mainland of Japan. The advice is to stay indoors so we’re sitting in our room, on the 22nd floor of the Hotel New Otani, watching the rain pour down on empty streets.

Our trip to Japan has been a few years in the planning: a retirement treat for Dougie, supporting Scotland in the Rugby World Cup. It’s been a rollercoaster for our team so far, suffering a mighty defeat against Ireland before rallying convincingly against Samoa and Russia. Sunday is the big event: the battle with the host nation to decide who will go through to the Quarter Finals. Two matches have already been cancelled because of the typhoon; England denied their face-off with France; Italy stopped from performing a miracle against the All Blacks. 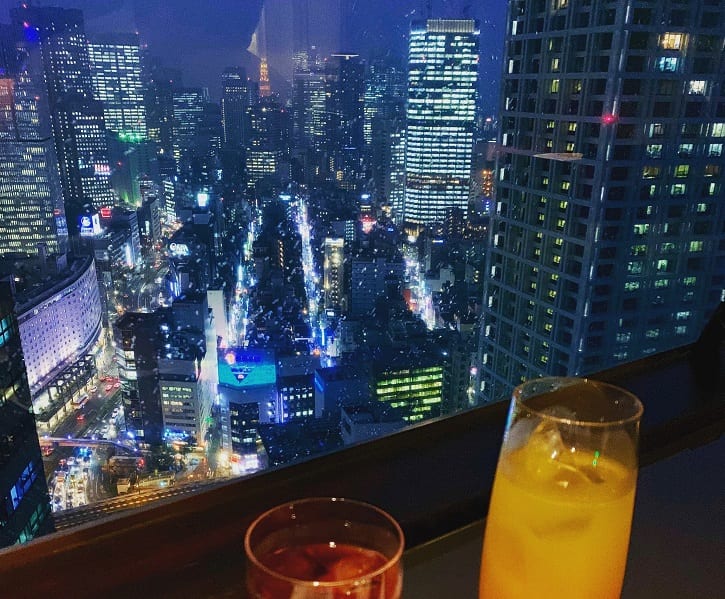 As the skies darken, we take refuge in the bar on the top floor of the hotel. A weird siege mentality has taken over. Laughter combines with a frisson of fear as we sup Happy Hour Cocktails. Later, we decamp to a restaurant which is showing the Ireland v Samoa game. We can’t see what’s happening outside so feel immune to the storm raging around us.

Checking on social media, we discover an earthquake has occurred to the east of Tokyo and that Typhoon Hagibis has hit land in Shizuoka. It’s this news that shocks us. Just a few days ago we had watched Scotland play Russia in this part of Japan. Over 15,000 local children had filled the stadium. These excited, adorable kids had waved flags, cheered, and offered gifts of origami figures to us, their foreign guests. How many of these children have been affected by the typhoon? Would any of them be homeless or bereaved? Our game of rugby starts to feel very insignificant.

Sunday morning dawns bright and calm. It doesn’t seem possible that Hagibis has ravaged parts of Japan when Tokyo has luckily escaped the worst. By lunchtime we’re told the game is on. Unbelievably, the people of Japan have come together to ensure the match can be played. All those volunteers, so many of them senior citizens, are back in Yokohama to welcome their visitors.

The stadium in Yokohama is packed with Japanese supporters of all ages. Even the neutral countries are backing the Brave Blossoms. We’re surrounded by English supporters who have added hachimaki headbands to their red and white team colours. The whole crowd are chanting Nihon…Nihon. It feels a bit intimidating to be part of the small Scottish contingent, waving the Saltire as the team make a comeback in the second half.

It’s not enough. Japan beat Scotland 28-21. A wave of emotion, which began with the impassioned singing of the Japanese national anthem, can be felt around the stadium. Japan, mourning the loss of its people in the aftermath of the disaster, cry out as their beloved team bring them hope.

The prickly Scottish thistle has been smothered by a carpet of cherry blossom. We’re heading home but the warmth of the Japanese nation will remain with us always. 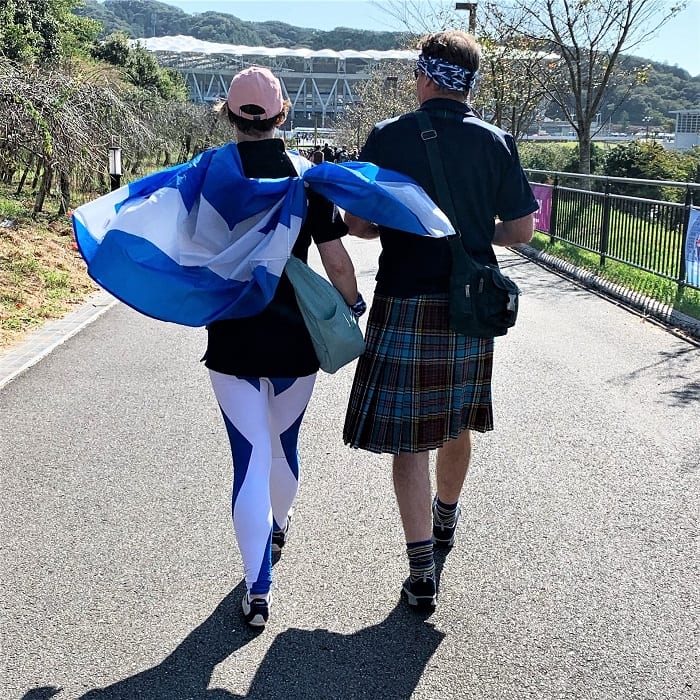