Home  >  Blog  >  Miniatures in bronze: The sculptures of Joseph Hillier in Spalding

I’m always up for a bit of Backyard Blogging. It’s great to travel and write about our adventures away from home but it’s wonderful to explore my own neighbourhood and share those experiences. Having learned much about the history of my town on the Holbeach Discovery Trail, Dougie and I decided to find out more about the miniature sculptures, created by artist Joseph Hillier, which form part of the Market Art Project in Spalding, Lincolnshire.

Hillier was commissioned by community-focused art programme, Transported, together with the Spalding and District Civic Society in 2016. He was asked to create a piece of art to portray the unique character of this market town. The artist scanned local people using 3D technology. Pupils from Spalding High School were involved in shortlisting and, after the maquettes were exhibited around Spalding, took part in the final selection. This resulted in 14 miniature bronze sculptures which can be found in the town centre. The work Joseph Hillier created is called Portrait of a Town: Spalding.

We picked up a trail map from the tourist office at the South Holland Centre in Spalding and spent a sunny morning hunting out these wonderful little bronzes. They’re not much bigger than the bricks to which they’re attached so you have to have your eyes peeled. The trail begins outside Ringrose Law Solicitors in Hall Place but, of course, you can start anywhere on the circular route. 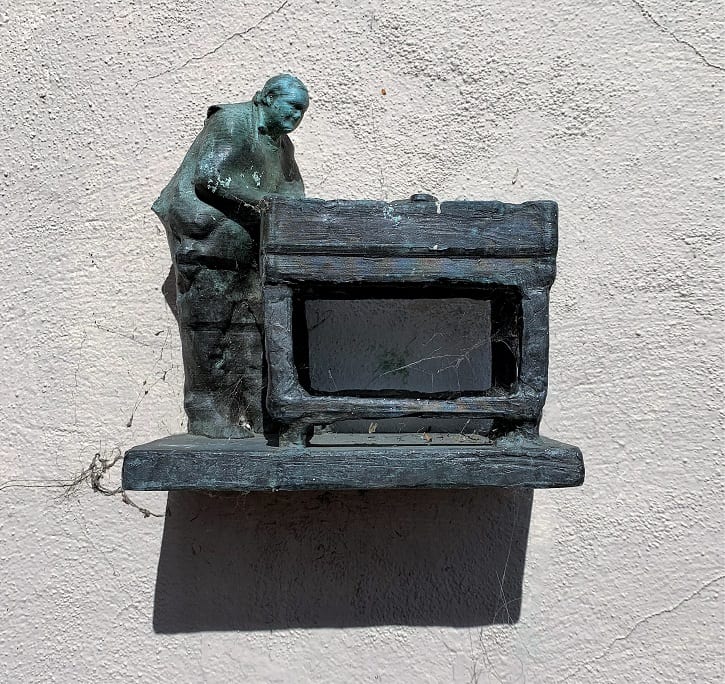 Spalding’s importance to our nation’s food supply is highlighted in the first three sculptures. Auction clerk, Ian, is at a table, performing one of the pivotal roles in our rural economy. 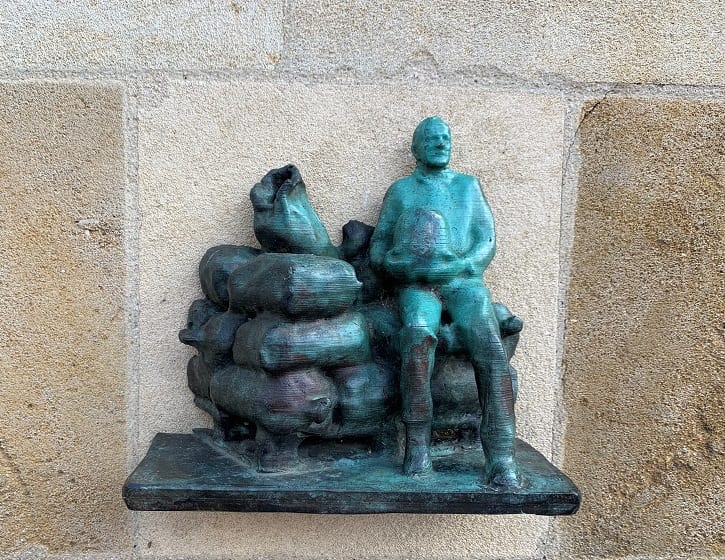 Outside Crown Affair hair salon we see Michael, a local grower, who has brought a delivery of pumpkins to auction. Pumpkins have become an important part of this area’s agriculture, with an annual pumpkin festival in Spalding’s town centre every October. 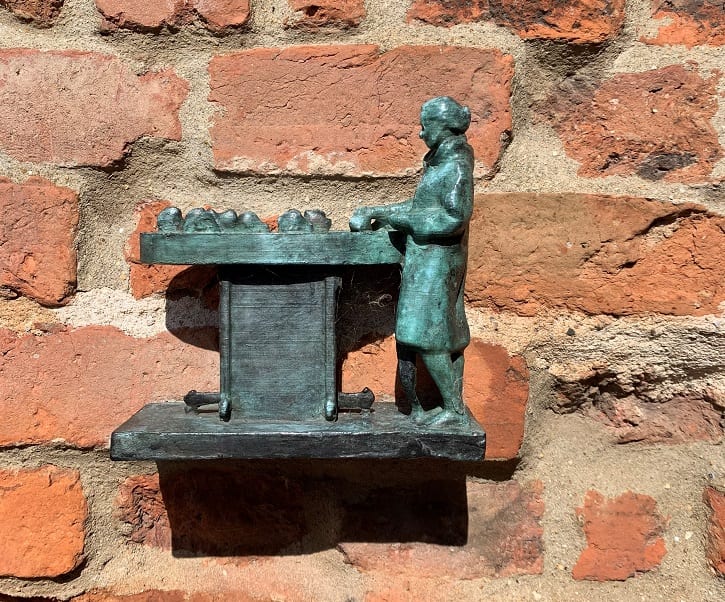 In Red Lion Street, the more high-tech end of the food industry is shown with Pauline labelling shrink-wrapped broccoli bound for the supermarkets. The sculpture at Boston College is very touching. Peter and Vivian, former postmaster and mistress of Cowbit, had never received their wedding photographs because of a mix-up with another couple. Holding hands, the couple are now immortalised in bronze: a precious, lasting alternative to their lost wedding snaps. 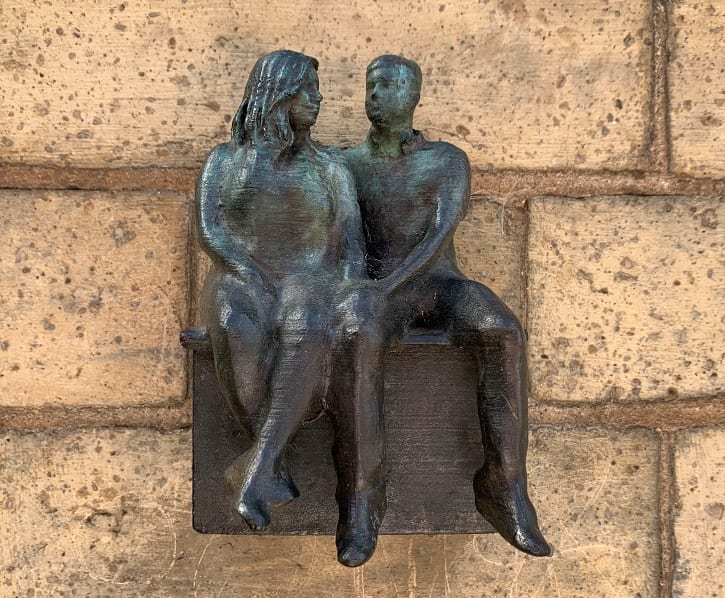 In a similar vein, there’s a heart-warming scene just opposite, outside Pennington’s coffee shop. Couple Kristina and Sam are sitting with their legs swinging, carefree and happy as Kristina was expecting her first child when she was originally scanned for the sculpture. 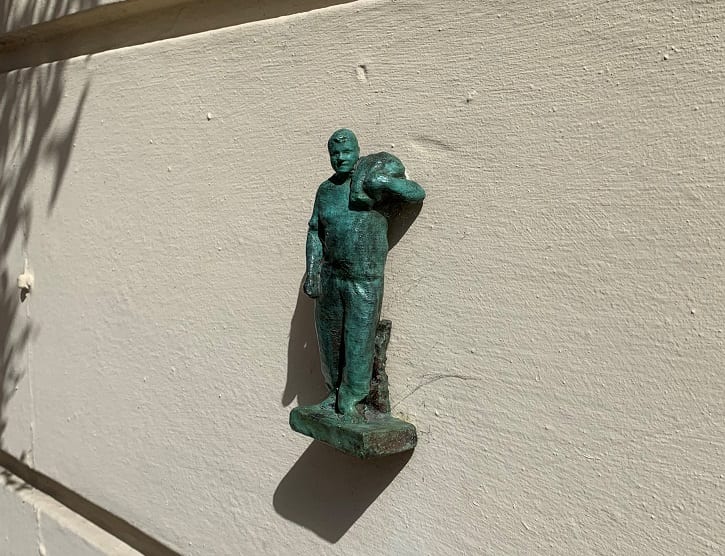 We then spot market trader, Steven, with his onions, outside the Red Lion Hotel. HIs stall can often be found on a Tuesday nearby. 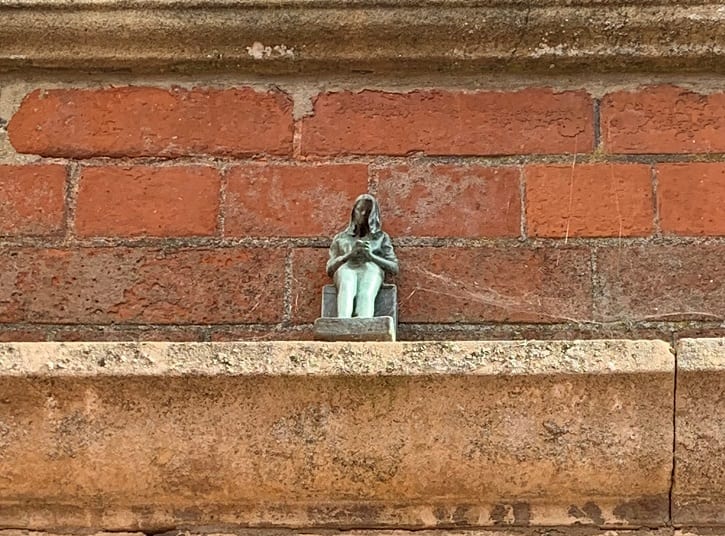 After a bit of searching, we find young Maia perched high up on the outside of the Spalding Gentlemen’s Society. This one makes me laugh as she’s bent over her mobile phone, texting. 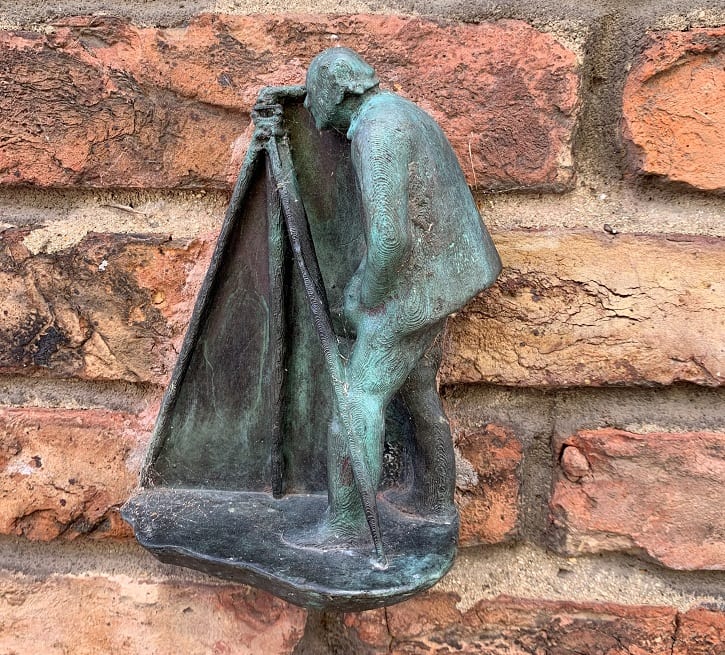 Drainage engineer, John, with his theodolite, appears outside the Lincolnshire Poacher pub. Hillier was keen to include a reference to the work that was done to reclaim this land from the sea. John’s old analogue equipment would have been vital in ensuring water was diverted around the town and back to the sea. 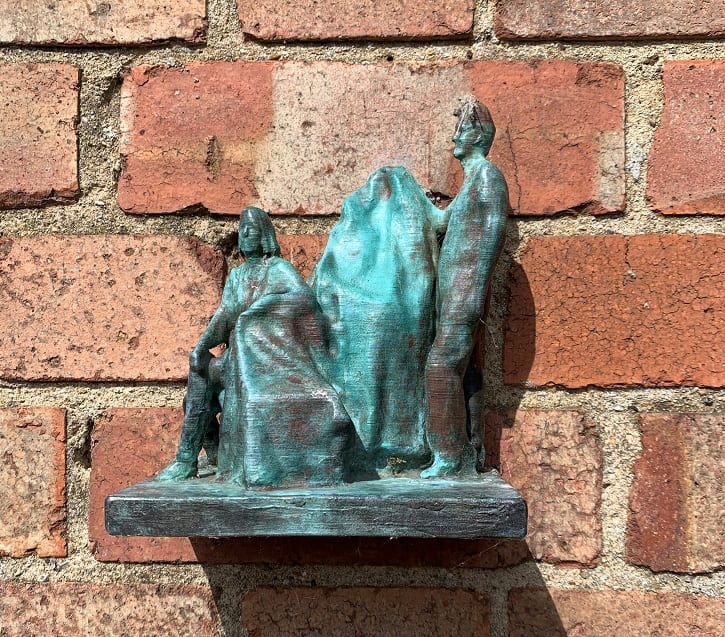 Along the river, artists Helen and John are tiny figures outside their own Riverbank Studios. They created their ‘mountain’ from props and blankets to show what they give as artists to our flat land.

10. Will of Chain Bridge Forge 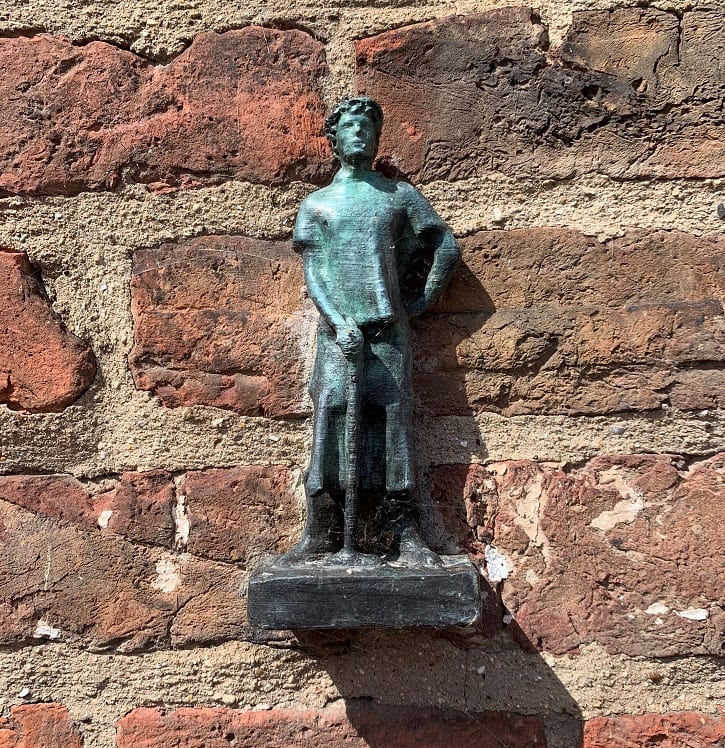 We cross the river and head for the Chain Bridge Forge where we find blacksmith, Will, recreating a pose from an old photograph of another blacksmith 100 years ago. 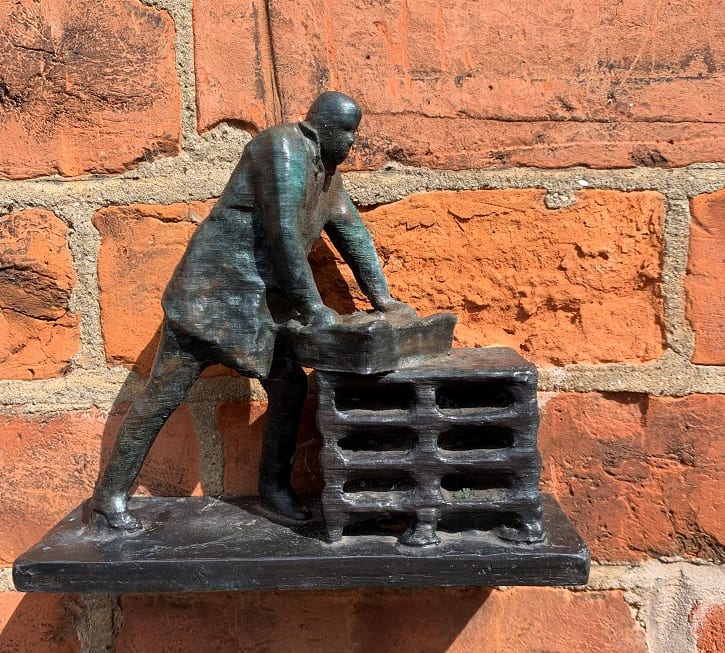 Heading back to the centre of town, more sculptures are found in and around The Crescent. This one is outside J.F. Inkley, The Man’s Shop. The physical work of intensive food production is again highlighted as we see a young man, Gundars, labouring with pallets of onions in a warehouse.

12. Rex with Soil in Their Souls 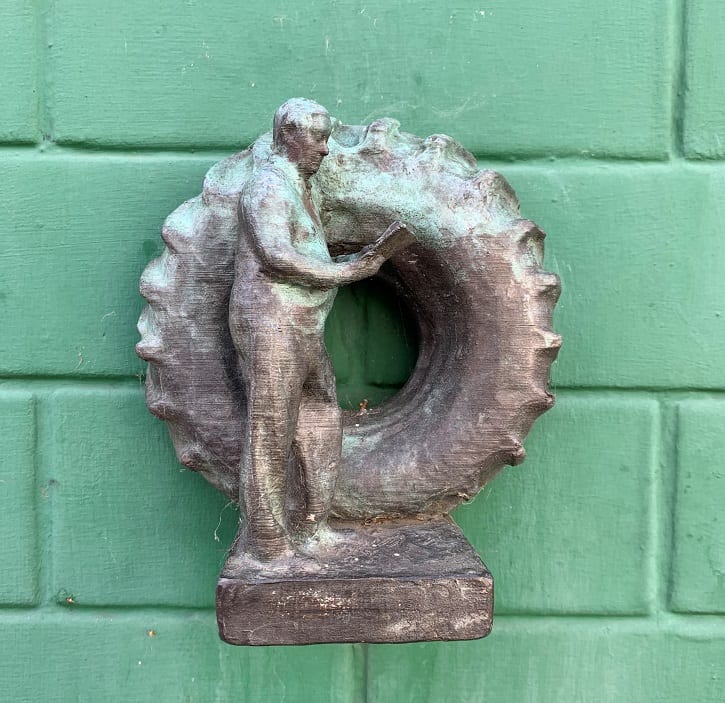 Author and farmer, Rex Sly, is captured in front of an enormous wheel of a combine harvester. In his hands is his first book and the sculpture is located outside Bookmark, the bookshop where it was first sold. 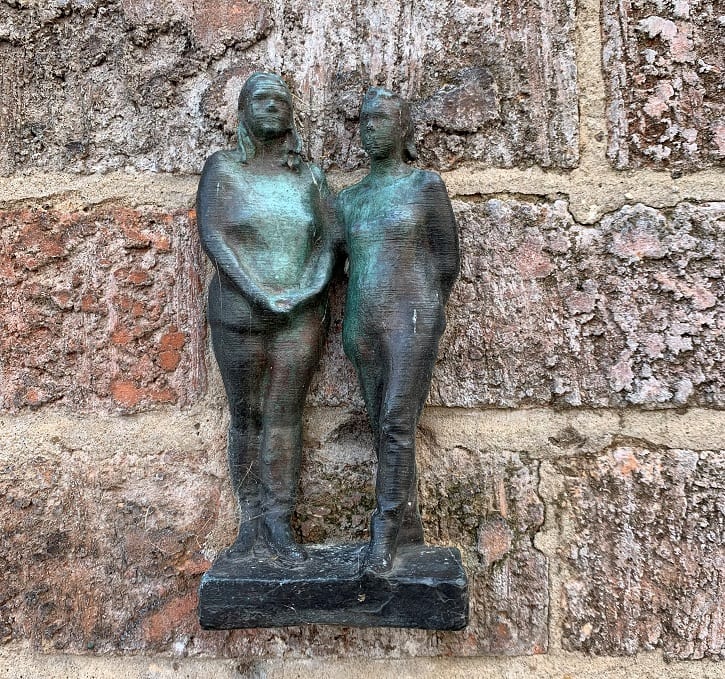 Elizabeth and Mary, sisters, stand outside their grandfather’s butchers shop, George Adams, which they now run. 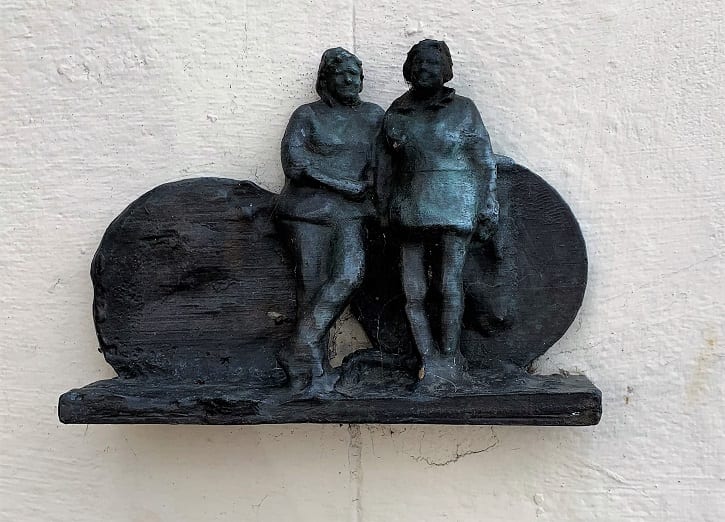 Finally we return to the very centre of Spalding where Fiona and Carol, who keep prize sheep, are located, quite fittingly, at the Priors Oven, the entrance to Spalding’s old Sheep Market.

The artist behind these bronze sculptures, Joseph Hillier, was born in Cornwall. He studied at Newcastle University and is now based in the North East of England. On a recent trip up to my original home city, we took a short detour off the A1 in County Durham to see a Hillier creation which is on a completely different scale to the tiny Spalding works. In Our Image is a 16.7m galvanised steel construction that sits at the entrance to the Aycliffe Business Park.

Taking about a year to complete, the gigantic head and shoulders now peep out over the treetops, watching over the town of Newton Aycliffe. It was designed to pay homage to the blood, sweat and tears of workers and the industrial heritage of the region. 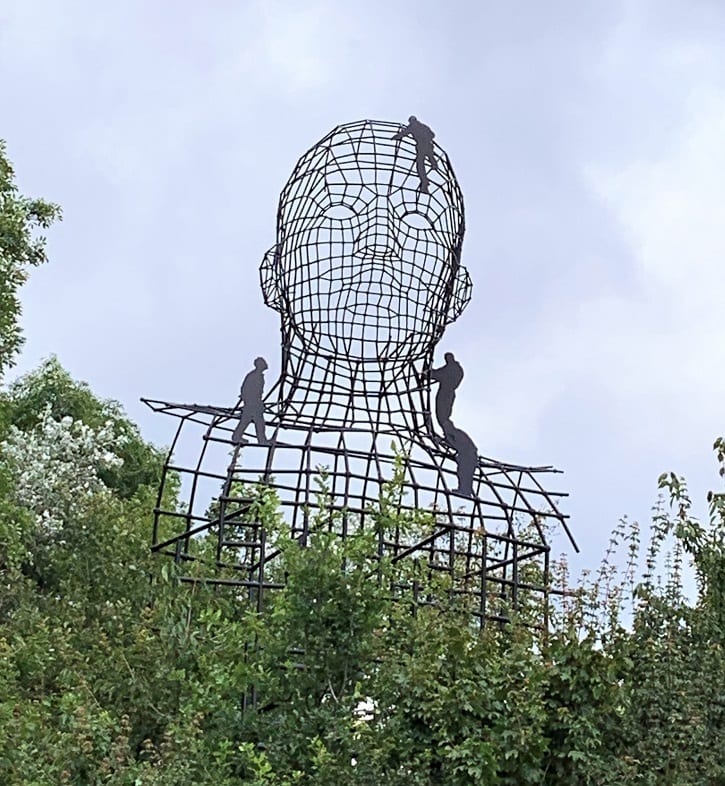 Figures scaling the sculpture are based on the some of the engineers who welded the piece together, to Hillier’s exacting specifications, in partnership with local firm, Aycliffe Fabrications.

I hadn’t realised Hillier was also the creator of the impressive heads forming the work, Generation, in the student forum at Newcastle University. He’s also had work on display in the sculpture garden of Burghley House near Stamford and the Broomhill Sculpture Garden we visited a few years ago in Devon.

I’m tempted to do a complete Hillier UK trail from Gateshead to Hull, Sheffield to Chelmsford, hunting out his fantastic creations. It would currently end in Plymouth where this year his work, Messenger, was unveiled. Depicting a young, powerful woman crouching in preparation to run onstage, this huge installation can be found outside the Theatre Royal. Commissioned for the city’s 2020 celebration of the 400th anniversary of the Mayflower sailing to America, it is, at 7m tall and 9m wide, the UK’s largest ever cast bronze sculpture.