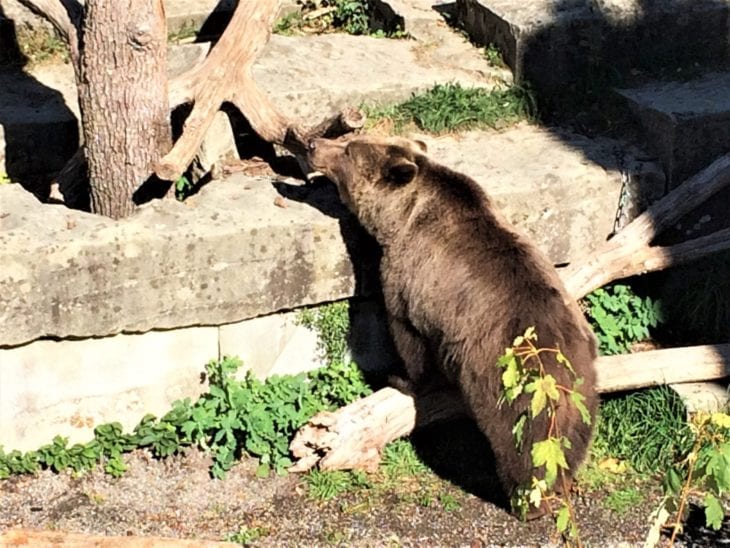 We fell in love with teddy bears in the Toy World Museum in Basel but came face to face with the real thing on our next stop in Switzerland: Bern.

Brown bears have been associated with Switzerland’s capital since its founder allegedly, in 1191, decided to name the city after the first animal he killed in his next hunt. This happened to be a bear (bär in German) so the town was duly named Bärn. Since the early 16th century the city has kept bears but it was only in 2009 that they were given a new home in a large wooded park in the middle of the city, on the banks of the River Aare. Now Finn, his mate Björk and their daughter, Ursina, are in an environment which is far closer to their natural habitat. It’s not perfect and some would probably prefer bears not to be kept in captivity in Bern at all, but at least they are no longer confined in a small bear pit. 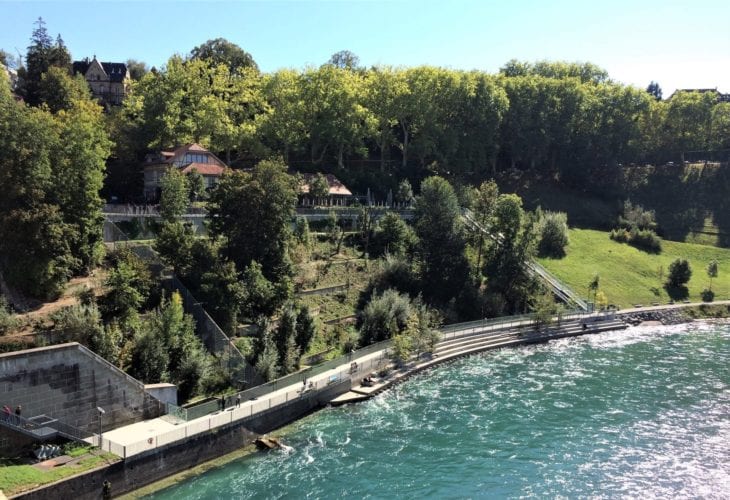 Dougie and I were quite smitten with these beautiful, lumbering creatures. The new park allows visitors to watch the family from a safe distance. The bears sleep, play, swim and seek out food which has been secreted around the park, replicating a normal hunting experience. The new elevator takes people, free of charge, down to the river bank where, if you’re lucky, you can see one of the bears take a swim in the adjoining pool. This was so wonderful: Finn, a huge hulk of brown fur seemingly weightless as he paddled about just inches away from the barrier.

Tempting as it was to just observe bears all day, the rest of this glorious city, which is a UNESCO World Heritage Site, deserved our attention. As in Basel, overnight visitors have access to free transport. On the morning of our first full day in Bern, we hopped on the tram outside our hotel and travelled to the city outskirts where we rode on a funicular (free of charge) up to Gurten Park. From this small peak – 860m – we had incredible views of the city below us plus the distant sight of an extraordinary line of snow-tipped Alpine mountains, including the Eiger and Jungfrau. 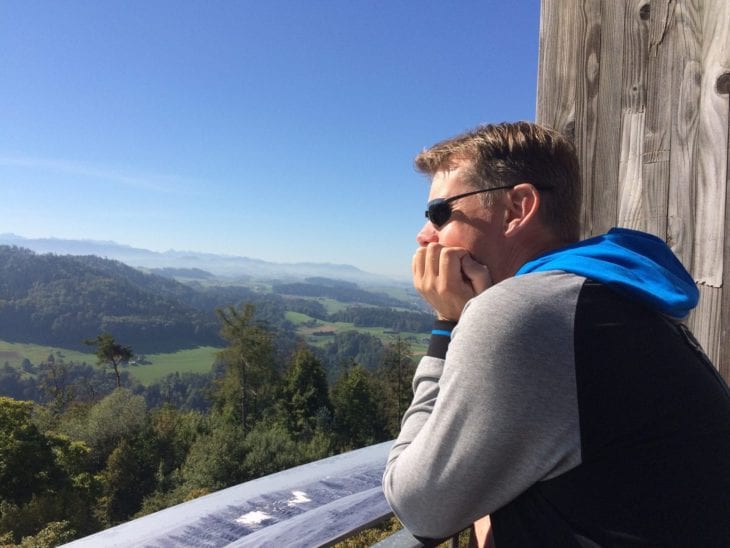 The park is an absolute joy. There are walking trails around the peak and beyond to other areas, plus spots for picnics with barbecues (including firewood) provided. Extremely family friendly, there is a playground, toboggan run, mini-train and electric cars to amuse children all day long. We loved the fantastic self-service restaurant, Tapis Rouge, where excellent local dishes such as rosti are served, along with soup, salads and a rather ingenious pay-by-weight section (weight of the food on your plate, I hasten to add!).

We travelled back down to the Old Town just in time to see the mechanical figures of the astronomical clock, Zytglogge, perform for visitors at the top of the hour. We joined crowds who congregate to watch its revolving figures, including a crowing cockerel and bears, twirl in the few minutes leading up to the bells chiming. 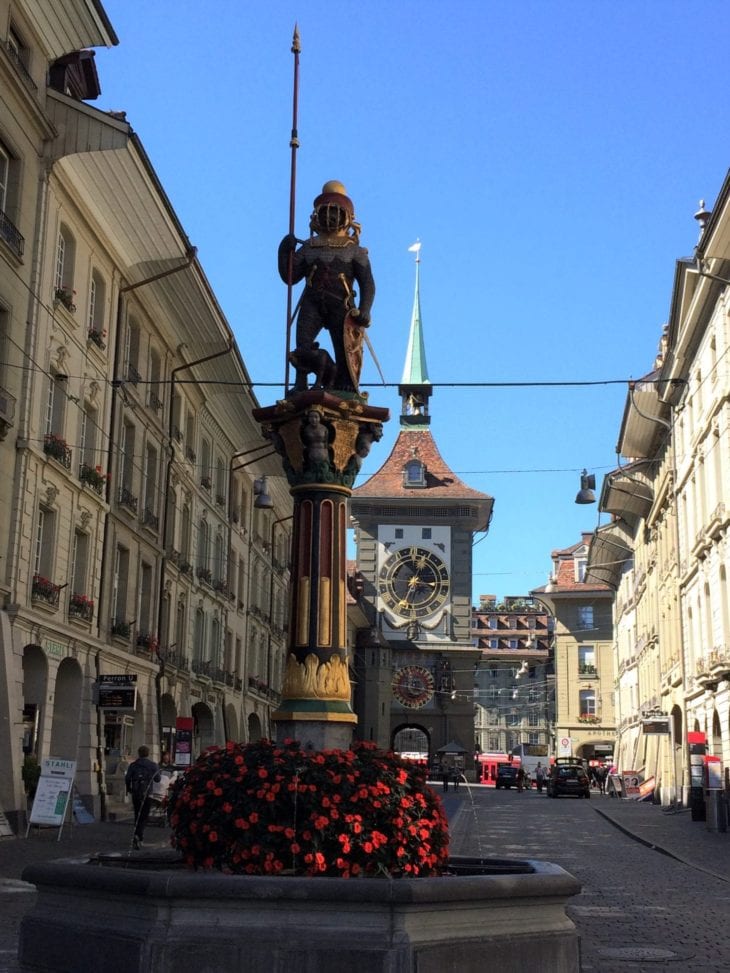 The streets in Bern, with their covered arcades and cellar shops and bars, are a delight. We spotted several of the decorative 16th century fountains, including the famous Kindlifresserbrunnen, which features an mighty ogre gobbling up some children – maybe not one for showing the kids, unless you’re at the end of your tether and need a ‘If you don’t behave….’ moment.

A short No. 12 bus ride took us to the Zentrum Paul Klee, a contemporary gallery shaped like three waves. Designed by renowned architect, Renzo Piano, it probably warranted a proper visit but the weather was too good to be inside for long, so we settled for a walk in the grounds and an apple tart in the café. The glorious weather certainly impacted on our sightseeing in Bern. Interiors of cathedrals and museums were sacrificed so that we could stay out in the warm September air as long as possible. 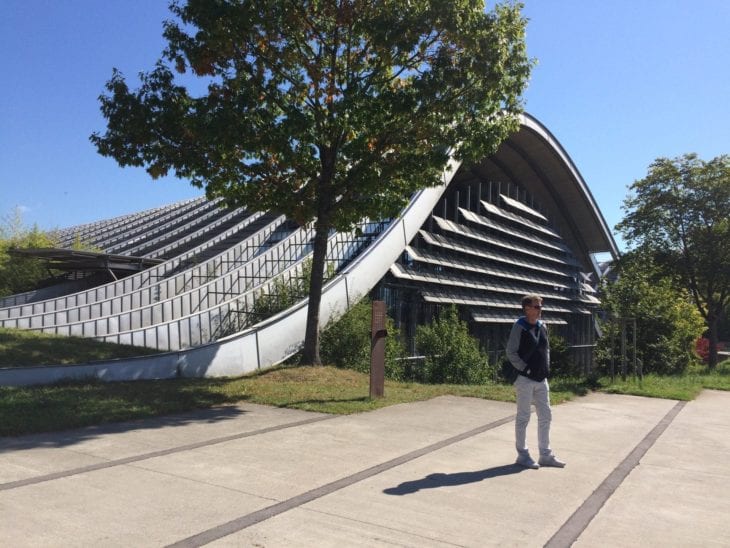 Energy restored, we made our way to the Rosengarten, cleverly realising that approaching this hilltop oasis on foot from the Paul Klee centre, rather than a steep ascent from the bear park, was a much easier option. This is another fabulous spot for city views and you have the chance to hang out with Einstein, a former resident, who welcomes people to join him on benches around the city. Dougie had a quiet word with him as they discussed the nuances of the Theory of Relativity. 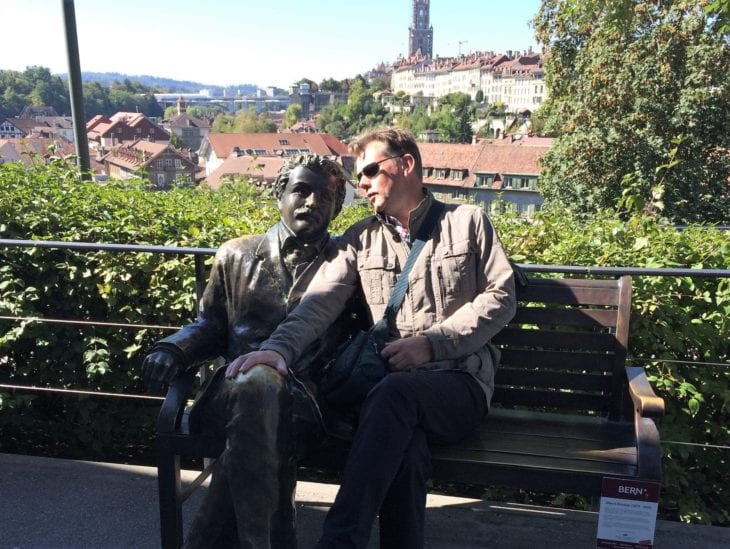 From here it was a short amble down the hill for a last look at our furry friends who were enjoying a play fight and a cooling swim. There was still time for a leisurely walk along the river and we enjoyed seeing the city from this angle, just as much as we did from the upper viewpoints. 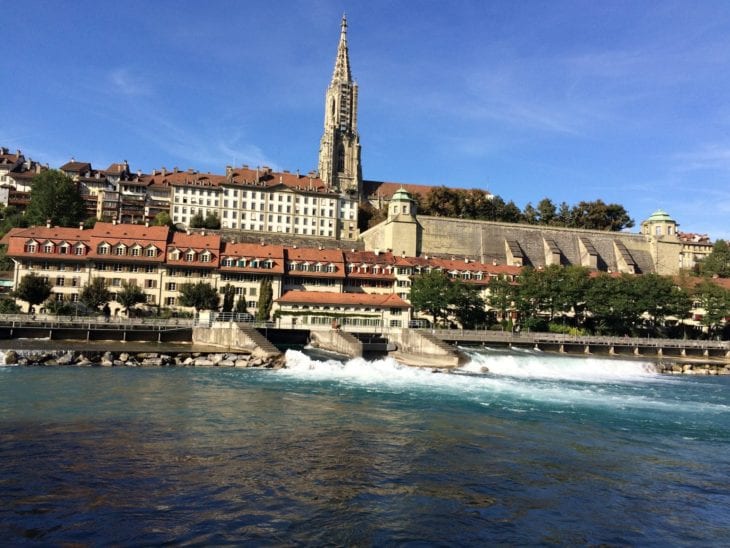 We sauntered along as far as the Marzili pool, the city’s popular bathing spot. The pool was empty of water but there were still die-hard sun worshippers making the most of the late warm sunshine. Just as we were starting to flag, yet another free funicular ride was on hand to whisk us up to the parliament building where, yet again, there was seating available to drink in the vista of gorgeous rooftops and distant mountains.

Where did we stay and eat?

We booked two nights at the Hotel Allegro, stylish, contemporary accommodation connected to the Grand Casino (Kursaal). We splurged on a Panorama Junior Suite on the top floor so the views were superb and we had access to the separate lounge with free bar. On our first night we ate at Yù where we opted for their Asian Dream Buffet. As with all buffets, the temptation is to eat far too much…and that’s just what we did. But it was delicious from the sushi to the sake cocktails, chop suey to chocolate fountain. Mmmm.

On our second night, preferring something more traditional, we headed into the Old Town to Le Mazot, famed for its fondues, raclettes and rosti. Full of Alpine cuisine and beer, we waddled back over the bridge to the hotel.

Bern was a huge surprise to us. Unlike many capital cities, it was small, incredibly pretty and relaxed. It seemed to encourage visitors to take their time, find a seat and just enjoy the view. 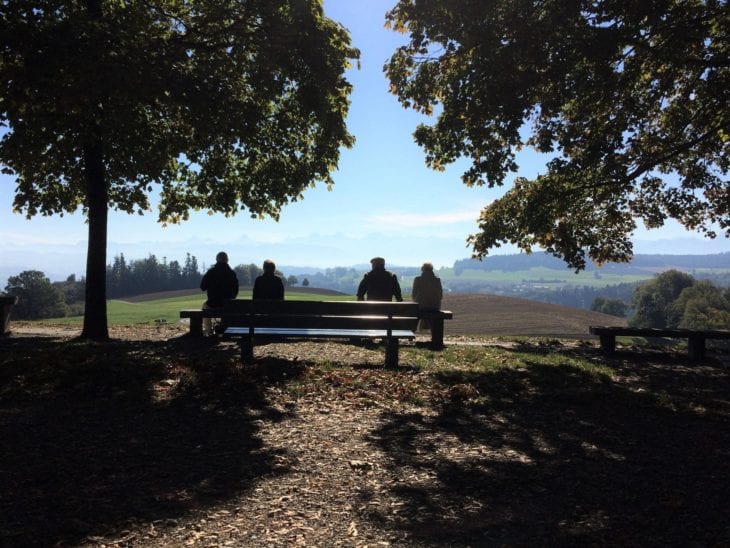