Home  >  Blog  >  Mum’s Gone to Sweden: Stockholm Syndrome
In 1973 a robbery took place at the Kreditbanken in Stockholm and four bank employees were held hostage over six days. ‘The Norrmalmstorg Drama’, as it was known, has since been associated with the term ‘Stockholm Syndrome’, a psychological term relating to the complex relationship that builds between a hostage and captor.
This bank and the adjoining building, both magnificent examples of late 19th century Swedish bourgeois stone architecture, have recently been turned into a fabulous contemporary hotel, the Nobis Hotel. Where better to start our tour of Sweden than choosing to stay somewhere which has a rich history. When the General Manager informed me that the cast and crew of the US film version of The Girl with the Dragon Tattoo, including Daniel Craig, stayed here during filming, I was sold on it.
“You do realise that Norrmalmstorg is the most expensive spot in the Swedish version of Monopoly?” Dougie happened to mention after I’d made the booking.
“Don’t worry, there’s a special Summer offer on: we’ve got one night free”, I replied.
“Which one is that, so I can make the most of it?” he countered, wondering why on earth he had let me loose with his credit card and in charge of all the arrangements.
However, the general consensus of the Burgess family was that this was an excellent choice. We had arrived in Stockholm in no time at all: a 1 hour 40 minute flight from Stansted to Vasteras Airport with Ryanair, an effortless transfer onto the special Flightbus into the city centre (about 90 minutes but a great way to see some of Sweden’s countryside including the beautiful Lake Malaren) and a quick taxi ride to the door of this imposing hotel.
The photos below will give you an idea of how swanky the place was: we had adjoining rooms, with our room far bigger than anticipated, with its chic sitting area and unusual lighting (yes, that is a table lamp enclosed within a cotton sack). The bathroom basin was quirky, it had a cover, rather like a large porcelain doily, which looked rather pretty but was liable to cause splashing if you turned the water on too fast. Tooth brushing became a game of chance: could you spit directly through the middle of one of the holes without hitting the sides? I like to think my aim improved as the days progressed. 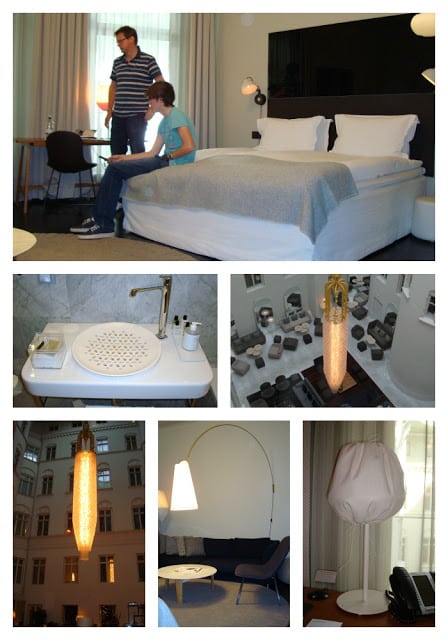 Our rooms had windows looking out onto the lounge directly below us. A huge chandelier dominated the vast space, 28 metres above the ground. In the lounge itself, Dougie and I chilled out after dinner with a cocktail, watching the beautiful people of Stockholm congregate. Attentive staff, warm smiles, mood-enhancing music drifting up through the atrium: this was the place to be.
This was our first taste of Stockholm and already we were captivated.