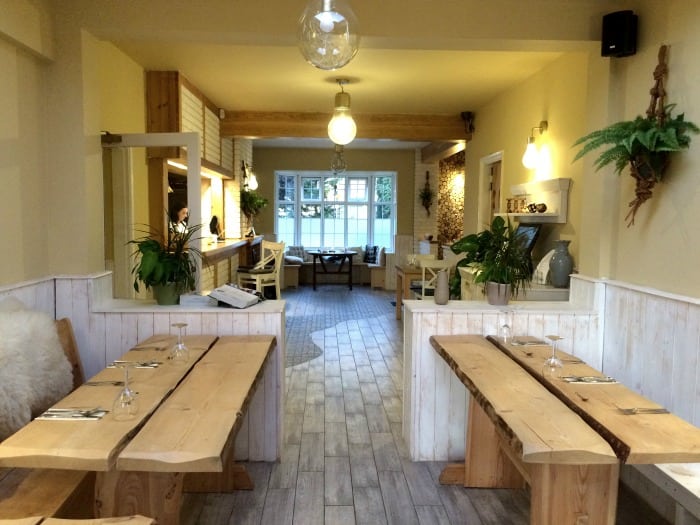 Welcome to the House of Feasts – a restaurant in the village of Eye Green on the outskirts of Peterborough.

Chef Consultant Damian Wawrzyniak has transformed the village pub into a beautifully stylish establishment with an emphasis on Polish cuisine using locally sourced ingredients. With a level 5 Bachelor of Management and Gastronomy degree, Damian has an impressive pedigree. He worked at Noma, Copenhagen, which was awarded the title of World’s Best Restaurant for four years and he had overall responsibility for the Champagne & Seafood restaurant for the London 2012 Olympics and Paralympics – the largest food operation in British history. Damian also met the Duke and Duchess of Cambridge recently to discuss Polish-British cooperation and earlier this year appeared on TV showing Mary Berry how to cook a traditional babka cake.

House of Feasts opened in June this year and as it’s less than half an hour’s drive from where we live, I was keen to try it out. I booked a table for Dougie, Rory and me for a Saturday night a few weeks ago. We parked in the restaurant’s own car park, at the back of the building, and were surprised to see a fabulous outdoor eating area and gardens. No wonder summer barbecues have been so popular at House of Feasts since it opened. 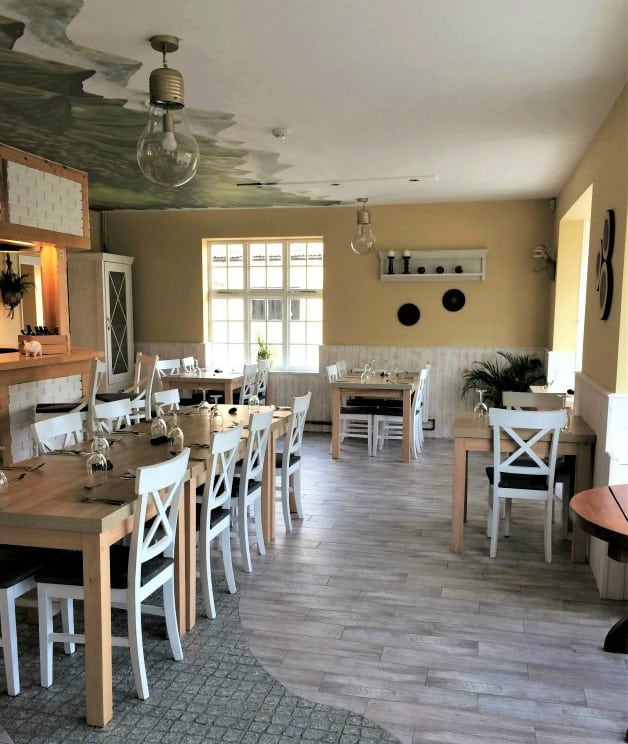 The esteemed chef is a great host, greeting all his customers, describing the dishes and making everyone feel welcome. It’s not hard to relax in such a pretty dining room. There’s a Scandi air about it (the Noma influence, maybe?) with stripped wooden tables, sheepskin rugs, linen cushions and huge, funky light fittings shaped as traditional light bulbs. There’s a wonderful mural on the ceiling and as you look up to admire the verdant scenery, you have to wonder whether there was some kind of scaffolding involved as in the Sistine Chapel for Michelangelo.

The menu, considering the high standard of the food, is good value, with starters priced from £5 to £8 and main courses from £11 to £16. The food is hearty and filling so we were glad we were hungry. I chose a salmon and melon ceviche to start,which was far more substantial than it sounds. The boys tucked into delicious parcels of traditional Polish pierogi, stuffed with slow-cooked pork. 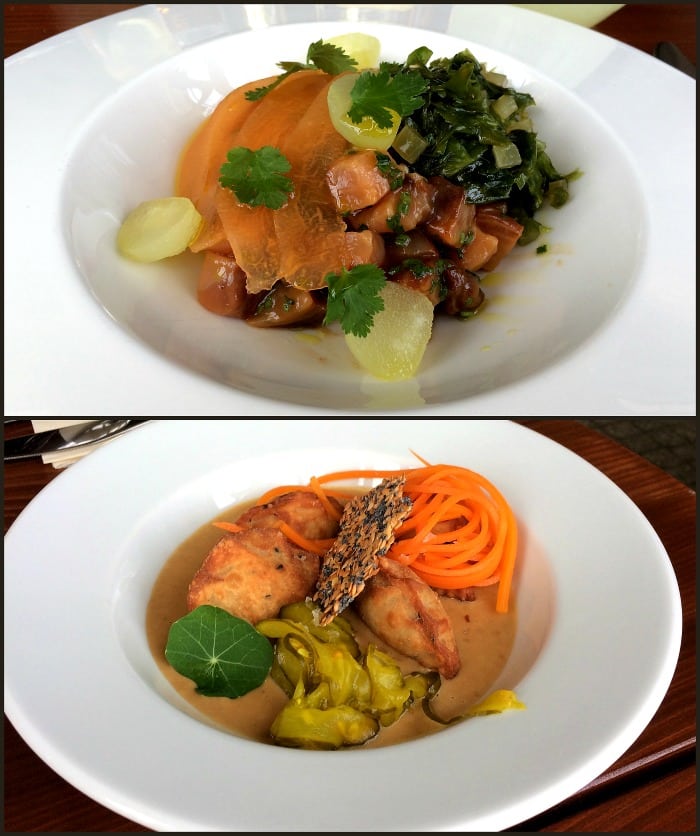 We each picked a different main course. Rory’s hake was very colourful with a lemon thyme sauce, leek puree and polenta. Dougie’s short rib of beef had been brined for 24 hours and cooked for 72 so it fell off the bone effortlessly. I plumped for a Polish Schabowy, similar to a pork schnitzel, in sourdough breadcrumbs with savoy cabbage and Fenland mash potatoes. 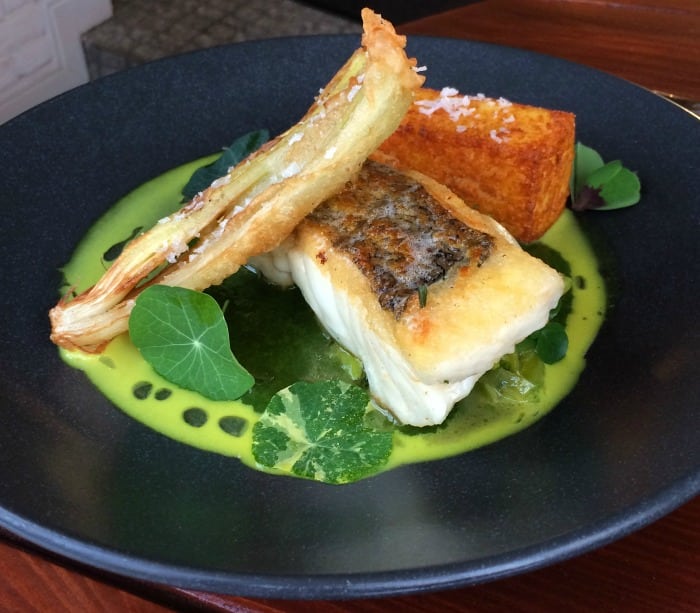 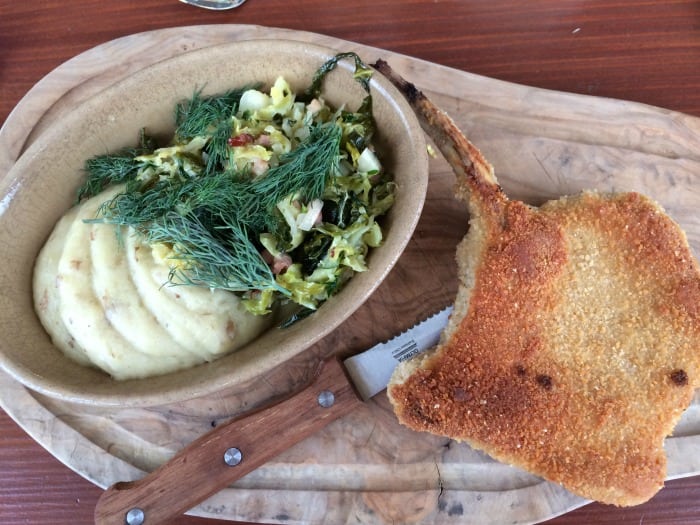 I left room for a pud as I’d spied a rich chocolate fondant on the menu. It was sublime, with a salted caramel sauce, walnut crunch and served with wild berries. The warm sauce oozed out of the middle once I’d dived in. I also dipped a spoon into Dougie’s crème brûlée which was flavoured with espresso coffee and orange. Delicious. 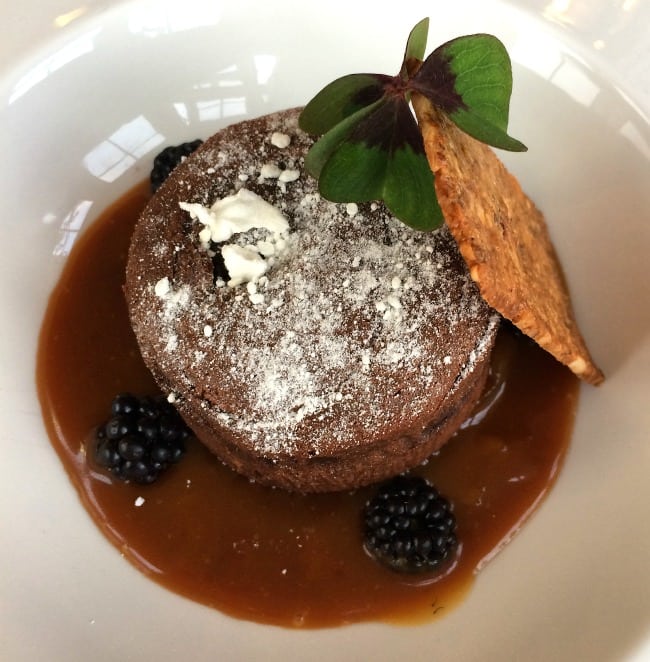 Damian’s passion for providing good food for everyone has led to him to introduce a concept called Homeless Wednesdays. Every week he opens up the restaurant to homeless people from Peterborough and the surrounding areas, arranging for them to be picked up then taken back to their shelter after their meal. He’s hoping other restaurants in Peterborough will get involved in the scheme. I hope they do.

It’s worth keeping an eye on the House of Feasts website to see the changing menus including the popular Sunday roasts. I’ve heard that handcrafted vodkas from Polish brand Debowa are on the drinks menu for September too.  At this rate, I’ll soon be taking up permanent residence.

The tagline on the House of Feasts website says ‘eat & drink sumptuously’. That pretty much says it all.

This is an extended version of an article which recently appeared in my Trish Takes Five column in the Lincolnshire Free Press.