If you want to get the lowdown on a destination you need to find a trusted blogger who can give you their honest opinion and advice. Which is why, not having the foggiest about what to  do on a short break to Seville, I asked online friend and blogger, Fiona Flores Watson, an expat who lives in the city. Fiona’s own blog, Scribbler in Seville, was my starting point for finding out about the city and then I found articles in the mainstream press, written by Fiona, which provided me with even more inspiration. In fact, if you search things to do in Seville, you will find Fiona’s authoritative words popping up everywhere.

My woman on the ground helped me narrow down my hotel choices and then, even better, arranged to meet Dougie and me during our stay. As is often the case when you meet an online friend for the first time, the relationship carries on as if you’ve know each other in person for years. Fiona and I chatted about Seville, her home for the past 13 years, and then discovered we had mutual friends of friends back in the UK – small world! Thanks to Fiona, we made the most of our three full days in the city.

Let me tell you what there is to see in this stunning capital of Andalucia.

You can’t really miss this majestic Gothic church which dominates the skyline of the historic centre of Seville. It was built over the main mosque in the city, conserving the beautiful Orange Tree Courtyard and the minaret which forms the lower two-thirds of the bell tower, La Giralda. Building began in the 15th century and it became the largest cathedral in the world. With its aim to reflect the city’s wealth, members of the cathedral chapter said, “Let us construct such a big building that those who see it finished may believe we are mad.” Well it’s certainly impressive inside and out and the reflection of wealth is undeniable.

Once you’ve recovered from the shock of being inside this vast building, take a look at the tomb of Christopher Columbus, be dazzled by the astonishing High Altar then find the entrance to the bell-tower. It’s not as hard to climb to the top as you might imagine, as there are 35 ramps rather than steps, created so that the muezzin calling people to prayer could canter up to the top on his horse. There are superb views of the city from the top.

There were long queues just after the cathedral opened at 11am but later in the afternoon we walked straight in. The cost was 9 euros which included entry to the church of San Salvador.

There are a thousand years of Spanish history to behold in this extraordinary palace. The royal residence was constructed in the 14th century within the palaces which had been built by the city’s Almohad rulers. The Moorish architecture (Mudejar style) is simply glorious and the wonderful mix of cultures which the Alcázar showcases, makes for a breathtaking visit. Wonder at the gilded wooden dome of the Ambassador’s Hall, admire the vaulted halls and then let yourself be amazed by the lushness of the gardens.  Fans of Game of Thrones might also spot some locations here  from seasons five and six.

Allow yourself a few hours to really appreciate the beauty of the Alcázar. There’s a great little café too where you can sit outside and admire the gardens.  If you’re thinking of visiting the Alcázar it’s probably best to book a slot in advance but if, like us, you are visiting in low season, you can chance just queueing for half an hour or so. Entrance cost was 9.50 euros. 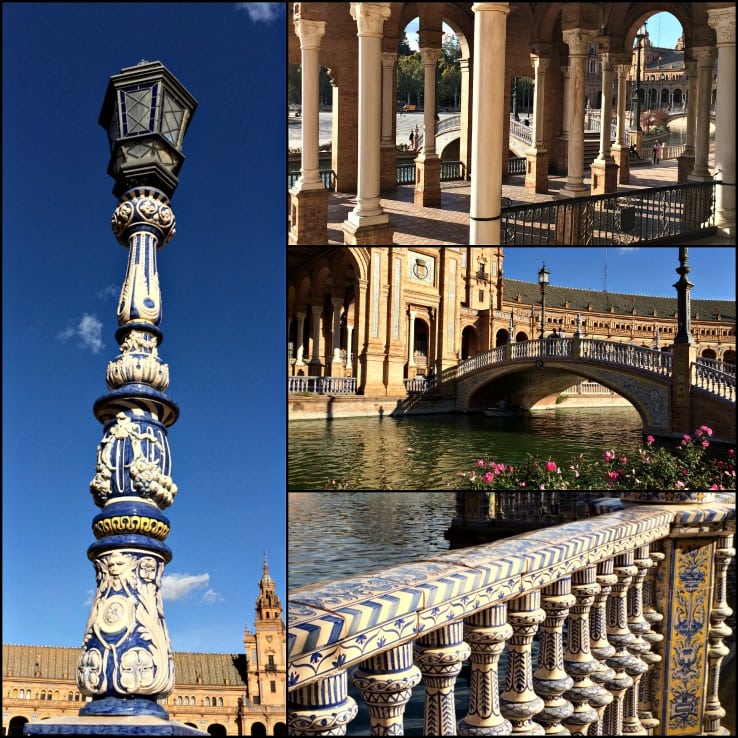 Probably our favourite spot in Seville, the vast curved plaza is the place to sit, soak up the sun and people watch.  Gorgeous bridges span a little canal giving the plaza a Venetian feel to it, particularly as you can hire boats there too. Everywhere you look, and even adorning the place where you sit, you will be entranced by the colourful ceramic tiles. The park must be perfect in the summer to escape the heat of the city but even in winter it was charming, with lovely avenues leading down to the archaeological museum and the museum of popular art and tradition. We didn’t visit either of these, unfortunately, opting to admire them from the gardens whilst we made the most of the sunshine.

My favourite book when I was little was The Story of Ferdinand by Mungo Leaf which told of a little bull who preferred smelling flowers to fighting. I was therefore a little unsure about whether to pay a visit to Seville’s famous bullring. However, I am glad we did as the baroque building itself is stunning,  and we both felt it was important to understand why bullfighting has continued to be a part of the culture of the region. The guided tour was extremely good, explaining in Spanish and in English, and with great passion, the history of the building and the rudiments of bullfighting. This was an unexpected highlight of the trip. 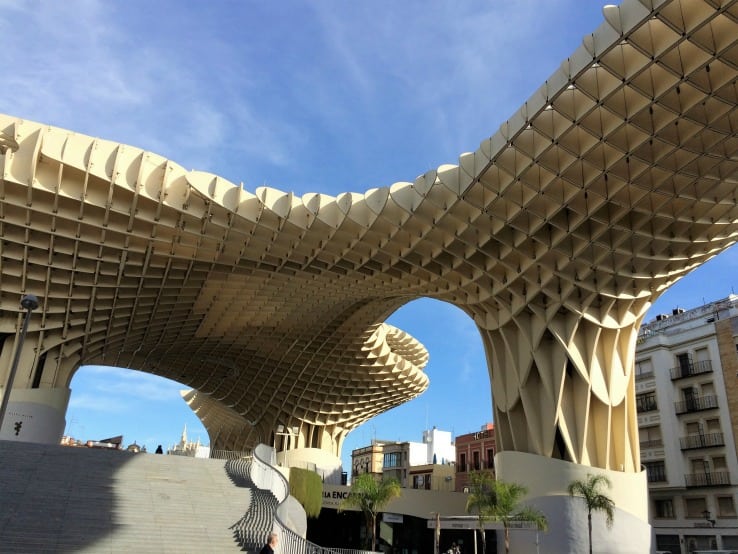 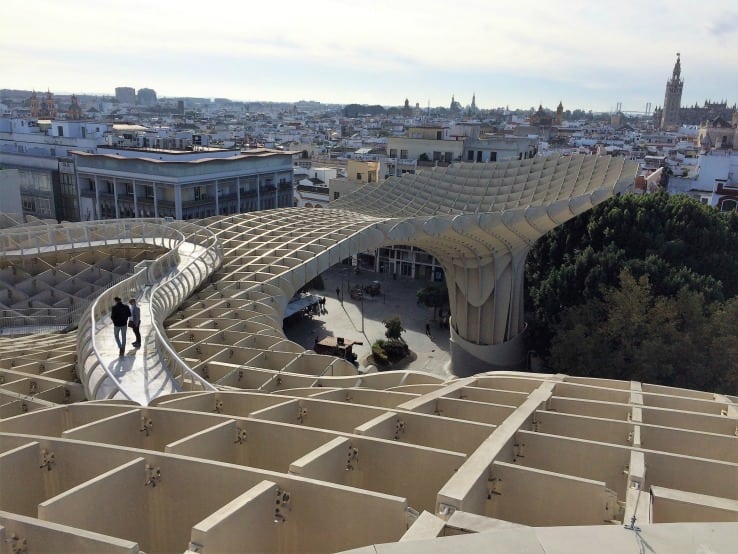 Not all the main attractions in Seville are centuries old. In 2011 architect Jurgen Mayer designed this controversial creation, supposedly the largest wooden structure in the world. Known locally as Las Setas (mushrooms)  this giant waffle spreads out over the Plaza de la Encarnatión. For 3 euros you can take an elevator to the top (26 metres high) and take in some fabulous city views. The entry price also includes a drink at the bar and a postcard – a real bargain. The ticket booth is located underground and signs direct visitors via the antiquarium. For some reason, Dougie and I mistook this for the aquarium and were searching for fish tanks rather than Roman remains.

We popped into this beautiful gallery as we were passing by and it proved to be a real find. Paintings from mainly Spanish artists from the medieval times onwards, including works by Goya. One painting caught my eye, a portrait by El Greco. Painted in 1609 the subject, Hortensio Felix de Paravicino, was a Spanish preacher. There was something about his face which just seemed to be, not only rather handsome and kind, but surprisingly modern. Maybe it was the beard?

Other posts about our short break in Seville:

Falling in love with Seville

Where to stay and eat in Seville