It’s all very well me posting shots of picturesque views, telling you about old pubs and even older trees and also suggesting you visit BritMums to read my grown-up review of our accommodation. But what you really want to know about is all the other detail: the arguments, the things which went wrong, the usual drivel I write about our family holidays. Relax, dear reader, you can have your fill now of my typical holiday blather.

When we eventually reached Kenmore, after a bad decision by me to go through Perth rather than the bypass as ‘it looks quicker’, we had just enough time to unpack and change before heading out to have dinner at our friends’ home just a few miles away. Whilst Rory and I seemed to manage this with little fuss, Dougie couldn’t get the shower to work and was standing butt naked in the bathroom, twiddling knobs and generally getting irate. He was about to ring for maintenance to sort it when I realised all that was needed was a good sharp tug…. (apologies for the blatant use of innuendo in that paragraph)

Our wonderful friends, Marion and Henry, and their two teenagers, Tino and Harry, own the Courtyard Shop attached to the apartments. I used to work with Marion at John Lewis in Oxford Street. She met Henry some years later at John Lewis in Edinburgh. We have stayed friends since 1985. You can imagine two ex-John Lewis managers run a fabulous shop/delicatessen: sharp merchandising, great products and excellent customer service. We bought a few items from the shop to keep us going then met them at their home for a gorgeous meal and a long-awaited catch-up.

Marion had provided me with lots of leaflets about the area so bedtime reading was spent perusing them and planning our next two days. Dougie and I both spotted all the special offers for various attractions. I was under strict instructions to make sure we used them. I failed. Leaving the restaurant after our first meal at the resort, I remembered too late the ‘free bottle of house wine with your first meal’. We also forgot the 10% off voucher for a great shop, Spirit of Wood, which was galling as we spent over £200 on home accessories including some cushions and an interesting metal artwork thingy for the bathroom. Dougie’s annoyance at losing over twenty quid’s worth of discount was assuaged by his delight at now having some tartan additions to our home: I didn’t let on that I later discovered they were made in England.

We did however remember our ‘free tea for two’ at The Watermill, a gorgeous bookshop/cafe in Aberfeldy. Hoorah! However in order to get the free cuppas we had to buy a book. I berated the boys for not bringing their Christmas book tokens with them so we bought a book Dougie was planning to buy anyway and had an excellent lunch, made more excellent on account of free drinks.

We very nearly had a domestic at the House of Bruar, a huge shop catering for people who love traditional Scottish clothing and produce. They do go a bit overboard on tweed and cashmere and jaunty items for bracing walks but it’s a good place to go if it’s raining. Thankfully it was glorious sunshine so we planned to have lunch there then head off round the back to climb up to the Falls of Bruar. The restaurant was heaving, it was noisy and busy and overwhelming. Then suddenly we saw, in the deli area, a hot counter selling pies. Whilst everyone else jostled with each other with trays to find food and a free table, we bought hot steak pies and went back to the car. 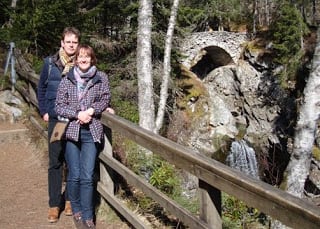 We changed into sturdy boots and spent the next couple of hours walking up to the waterfalls, following in the footsteps of both Robert Burns and Queen Victoria. All the time I was huffing and puffing up the path, I kept having an image in my head of Queen Vic with her Timberlands and spotty ski-jacket, trekking up the hill and stopping for a Mars Bar and a Powerade. Or was that just me? It was a brilliant afternoon, we laughed and chatted all the way, Rory was full of energy (was that really our son?) and we even travelled further than we should have done as we didn’t read the sign properly before we started the walk. Did wonder why we were clambering over fallen trees and that everyone else had disappeared.

On the way back to the apartment we stopped in nearby Pitlochry, home to a hydro-electric dam and fish ladder. Rory was fascinated by all this – good material for his Geography exams – and his father explained with great detail how the fish ladder was created so the salmon could continue moving upstream even though a thumping great dam stood in their way.

“Look at the steps,” said Dougie, pointing at the water. “That’s where the salmon leap from one pool to another.”
“Not sure that’s right, Dad,” replied Rory, pointing at the information sign. “It says here they swim through a pipe underneath.”

We didn’t spend too long in Pitlochry as the amount of walking we’d undertaken was starting to tell. Tired and hungry we headed back to Kenmore.

Guess what I found when we got back to the apartment and happened to look through my purse? A book token. My book token which I’d also been given for Christmas. I kept quiet.