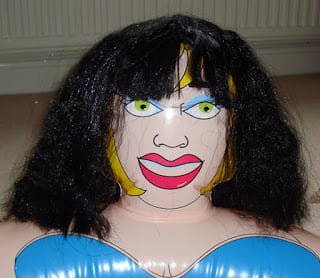 Pretty scary eh? This is Soapy Sophie from my previous blog post modelling the shocking wig I attempted to create so I could go to the assassins-themed fancy dress party as Mia Wallace from Pulp Fiction.

You may remember I asked for ideas and, amongst some splendid suggestions from you all, including Emma’s Mick and Bianca Jagger combo because she hadn’t really got a handle on the theme, Uma Thurman and John Travolta’s iconic duo appealed to us. I had a long white shirt and cut-off black trousers and Dougie…well, Dougie had a suit.

As usual, having had plenty of time to plan this, we left it to the day before New Year’s Eve to decide who we would go as and how we could re-create the look. Our local fancy dress shop had an excellent black bobbed wig on their website but when I turned up, it was out of stock. Not one to give up, I bought an alternative: it was an Egyptian Lady wig: very long with ribbon threaded through it. I maybe should have been sensible here and opted to go as Cleopatra but my heart was set on Uma and I reckoned I could alter it.

Once I’d taken all the ribbon out, the plastic hair was far too wavy and full of static. I’d been told that heat doesn’t work on synthetic wigs but, feeling brave, tried to flatten the bumps by ironing it though a tea-towel. It melted. Thankfully the melted chunk was at the bottom of the wig which would need to be chopped anyway. Dougie was brought in at this stage to sit in the kitchen with the wig on his head while I set to with the scissors. It’s harder than it looks to cut straight. As you can see from the photo, this was Uma Thurman channelling Crystal Tipps (those old enough to remember will know what I mean: those who aren’t, click HERE).

There was no way I could go to the party looking like this and, at 6pm New Year’s Eve, we had to think again…and quick. I decided, having a black dress and a string of pearls, I could manage to re-create another reader’s suggestion of La Femme Nikita from the 1990 film. Dougie would have needed to grow a large amount of stubble and find a long tweed coat in just over an hour if he was to dress up as Victor the cleaner from the film. Thankfully YouTube came to the rescue and I found the restaurant scene from the film where Nikita is given instructions from her boss, named Bob. Bob wears a smart suit and tie. Dougie was Bob. Sorted.

Rory had also been invited to the party with his pal and they picked up on yet another idea from the original comments on my post, going as Eric and Dylan, the Columbine killers. A rather grim and unsettling choice, I have to admit, but as we can’t get Rory’s checked Superdry shirt off his back at the moment, he looked just right.

Most people had interpreted the theme as villains or baddies rather than hit-men per se. Amongst the party-goers there were a couple of Rambos, an assortment of James Bond look-a-likes and some Mr and Mrs Smiths. One friend came as the milkman from the Bond film. The Living Daylights, although no-one quite remembered that there was a milkman and presumed she (yes, she) had mistaken the theme at first and come as Benny Hill.

A slight issue with the food. We thought it was going to be a drinks party with nibbles so I insisted we eat before we left, making the family a lamb biryani. We arrived to discover that although there were dozens of teenagers demolishing a buffet, there was a dinner party arrangement for the adults who were there. We were ushered into the dining room for a big sit-down meal….moroccan lamb. Just a small portion for me, thanks!

After dinner we played mini-roulette with black vodka and port. Each adult had a red and black shot glass with three numbers on each. To win chips, if your number came up, you had to drink the corresponding black or red drink or, if you were stupid enough to have decided to drive, like me, you opted for a quiz question on James Bond and villains. There was something unbalanced with the roulette wheel as four numbers came up all the time including mine, red 16. I was then quite grateful I was driving as I’d have been completely trollied otherwise. My knowledge of villains was limited but I did impress with my recollection of Ursula Andress’s Golden Globes.

The large group of 18 year old teens behaved reasonably well with only a few spilt drinks and one or two maudlin “Oh I love you, man”  chaps staggering about after midnight. Rory and his smaller group of 14/15 year old male friends, despite their tongues hanging out at the array of 18 year old female flesh on show, complete with garters and guns, knew their place and found a home in the host’s son’s bedroom. Thankfully their stash of beer and alcopops they had hidden in a chest of drawers was soon discovered and confiscated. Rory swears he only had a J2O.