Looking at the title of this post, you’d think we had just let the guidebook fall open and chosen all the attractions beginning with the letter ‘M’. You’d be wrong. If we had done that, then the Mushroom museum would have been on the list and, I’m sorry to say, we weren’t sufficiently fired up with a longing to see multiple fungi to tear ourselves away from the sunbed. We were, however, keen to get out and about and the three Ms were excellent places to visit.

Finding things to do during our two weeks in this region of Austria wasn’t a problem as I had contacted the Carinthian tourist board and asked for their advice, mentioning that I was a family travel blogger. I was delighted to receive complimentary Kärnten Cards which would give us free and discounted entry to many of the attractions. These were worth 44 euros each so were a significant bonus.

Monkey Mountain (aka Abenteuer Affenberg) was a hit with all three of us. I know you don’t come to Austria to see Japanese macaques but we had reasoned that monkeys live in trees so there would be a decent amount of shade to protect us from the baking sun. Free entry (saving us 10 euros each) put smiles on our faces as we took our place on the guided tour with Dr Bob. His name wasn’t Bob and I don’t think he was a doctor, but he looked very like his namesake from I’m a Celebrity…Get Me Out of Here and his pre-tour talk with warnings about what not to do when in the company of the monkeys, made us feel he knew his stuff. Having said that, the tour and his warnings were in German so we weren’t entirely sure what was being said. I speak no German at all and Dougie’s O level from over 30 years ago is limited. Rory learned a little German following a two-term experiment at the age of 12 but he told us he could only remember the word for gluestick after a memorable session on ‘Things in the Classroom’. This was unlikely to be of much help if attacked by a group of predatory primates. “I have a Klebestift and I’m not afraid to use it!”

In the end, we had no need to worry. The monkeys were a delight, their appetite for apples was unsurpassed and a delightful hour was spent watching them groom each other, play and even swim in the company of the genial Dr Bob. 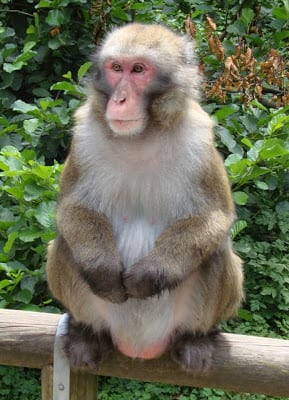 Minimundus was a revelation and half price with our Karnten card (6.50 euros instead of 13). Located in the town of Klagenfurt, we popped in after our Beach Volleyball soaking. 150 buildings, trains and boats all constructed at a scale of 1:25, based on the original plans and using the same materials such as marble, sandstone or basalt lava. A beautifully laid out park with a marked route to ensure we didn’t miss any (Rory made sure of that: heaven forbid if we should deviate from the arrow) this was a great way to see the wonders of the world and pretend we had visited them in real life. The Treasury of Petra, Sydney Opera House, Great Wall of China…Shame that my better photos were of buildings I have already seen in real life. I did, however, discover a new word. The word for globetrotter is ‘Weltenbummler’ and I think I may adopt that for my blog. Trish the Weltenbummler. Has a certain ring to it. 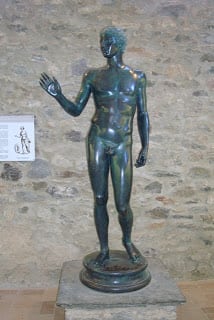 Magdalensberg was Rory’s choice for one of our days out and free to enter with our card (normally 5 euros). A circuitous drive up the mountain tested the hire car’s acceleration but eventually we reached the settlement, one of the biggest Roman archaeological excavations in the Eastern Alps. We were the only visitors on a blistering afternoon so our walk around the open-air museum was exhausting but rewarding, trying to decipher gravestones and marvelling at the imperial gold bar foundry, the Roman ‘Fort Knox’ of the Alps.

The excavations have been going on for a century and they are still trying to find the Celtic settlement underneath the Roman one. One of the main discoveries, however, came some centuries earlier when, in 1502, a farmer ploughing his field found a near lifesize ancient statue of a young boy, now known as the ‘Jüngling vom Magdalensberg’. Originally thought to be a a Roman copy of the Greek original, it seems that somewhere down the line the original find has been lost and the ‘real’ statue, in Vienna, is actually a Renaissance copy. A pity, but it still a beautiful piece and a cast of it is on show in the museum at Magdalensberg.

The Ms were a great success, so much so, we decided we would try G and H the following day. Watch this space.