Home  >  Blog  >  Who is this woman imitating Julie Walters? 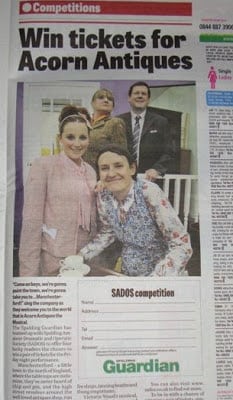 Our local paper, the Spalding Guardian, ran a competition last week to win tickets to see our show, Acorn Antiques – The Musical. To accompany the piece was this delightful photograph of me, Miss Berta, Miss Babs and Mr Clifford. Thankfully our names were not included so I was hoping people might not recognise me. Fat chance. The lady in the paper shop was the first one to give me a nod and a wink.

If you ever thought the world of acting was glamorous, think again. The hairnet, pinny and gurning face are bad enough, but when you have to make your own Dowager’s Hump with an old cushion and some velcro, plus sew varicose veins into tights using thick blue wool, you know your days of strutting around the stage in high heels and suspenders are over.

Spalding Amateur Dramatic and Operatic Society will be performing the musical next week at the South Holland Centre: opening night is Tuesday 21 May. We have come a long way from the auditions in January, there have been ups and downs but mainly an awful lot of laughing as the script, written by Victoria Wood, is witty, clever and downright silly.

Martin, our director, is a stickler for detail, the nuance of every word has to be just right. Anita, who plays the baddie, Miss Bonnie, will, I imagine, be having nightmares about the cadence required in the sentence, “How wide, approximately, is your soil pipe?” Meanwhile Clive, who plays Mr Clifford, is losing sleep over the innocuous line “neither of you seem very likely to get married”. As for me, I must stop adding words that aren’t there: apparently there is a world of difference in the line “his private parts went up me kick-pleat” and “his private parts went right up me kick-pleat.”

Craig, our musical director, has spent many weeks teaching us the songs and their harmonies. We think we have them sussed until Abi, our choreographer, adds moves to the songs. Of course what happens then is we all focus on the dancing and forget to sing. “Harmonies! Diction!” our MD shouts over the top of our efforts so we try hard to concentrate on the music, only to forget the steps. It’s the yin and yang of amateur dramatics and has our directors and choreographer tearing their hair out. Last night we seemed to get the singing and dancing to combine but, unfortunately, the concentration required to do that was so immense, we forgot to smile. “Tits and teeth!” our dance captain, Charlie, implored.

Tap dancing has been a revelation for us all, even with Abi’s ‘simple steps’ (fibber!). My character, Mrs Overall, gets to tap dance too, dressed in the most unattractive combination of tights, leotard and leg-warmers which have to be seen to be believed. Dancing with a stoop is, I have discovered, quite an art.

Sunday is our ‘get in’ – theatre luvvie lingo for moving set, props and costumes to the theatre. After the week’s run we have the ‘get out’. I’ll leave you guessing what that means. From Sunday onwards I will take up residence in one of the dressing rooms, probably with Miss Berta, Babs and Bonnie for company and we will have an emotionally-draining week trying to keep things on an even keel at home when our minds are permanently at the theatre. It’s going to be stressful, stomach-knotting and exhausting but the exhilaration and adrenalin rush should remind me why I auditioned in the first place. The smell of the greasepaint, the roar of the crowd….