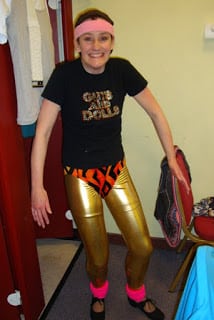 Our week’s run of Acorn Antiques, The Musical, came to an end on Saturday night, to huge cheers, plenty of applause and a great many aching jaws from excessive laughing. The South Holland Centre in Spalding had very near full houses most of the week so around 1000 people must have come to see us over five nights. Playing the lovable cleaner, Mrs Overall, seen here in my cracking tap dancing outfit, was probably the best thing I have ever done on stage. Victoria Wood’s script was so gloriously funny, every line I had was a corker. From singing “Could have a custard f**king cream and shut the f**k up” to telling the audience about my “lemon and lime reusable gusset freshener”, this was a dream role which I milked to the nth degree.

Acorn Antiques, The Musical, is a show which parodies 70s sitcoms with wobbly sets, missed cues and absurd plot lines. So many people in the cast were blessed with great lines, songs and dances. This made for a very happy group as we chortled our way through five months of rehearsals and had an absolute blast during show week.

Of course, not everything goes to plan and these will be the things we will remember fondly. The blasted TV which was brought on stage every night to screen the ‘living will’ was beset with gremlins. Cables fell out and the mute button was pressed accidentally, leading to some magnificent ad-libbing from Zack who played Hugh, the pitiful adolescent from the government’s pitiful adolescent training scheme. We also had a night when one of the ‘sisters’ forgot to wear her charm bracelet which was crucial to the ‘triplets identification jewellery scene’ As I rooted down both sleeves looking for it, her eyes were burning into me, willing me to realise that it wasn’t there and we were all going to have to pretend. What larks! On the final night the old-fashioned shop doorbell fell off, with such comic timing it could have been scripted.

What will last with me, however, is the camaraderie amongst the cast and crew. During the week of the show, sharing a dressing room with Miss Babs, Berta, Bonnie and Mimi, there was laughter mixed with nerves. We helped each other out, shared sweets, went through lines, assisted with quick changes. ‘Can you fix my hump?’ was a familiar refrain from me every night. It’s this shared experience which makes AmDram so exhilarating. Each night before we were due to go out on stage we would say, “Why do we do this?”. Each night as we returned to the dressing room, the applause still buzzing in our ears,we would say, “This is why we do it”.

If you would like to read a review of the show written by the editor of our local newspaper, click HERE