We had never truly visited Edinburgh as tourists before this recent trip. As the place of Dougie’s birth and schooling, his relationship with the city is a very personal one. He may not have lived there for 30 years but he feels comfortable in the city, instinctively knowing how to get about and where to park, skills that were patently lacking as we navigated round Glasgow.

Past visits to the city have involved visits to friends and relatives, an eventful school reunion and a matinee performance of Starlight Express at the Edinburgh Playhouse, made all the more interesting by the presence of a man signing for the deaf on stage. Since then I have been unable to sing the title number without appropriate actions.

Edinburgh certainly put on a show for us this Easter. It welcomed Dougie back with open arms and bathed us all in sunshine when, for the first time, we saw this glorious city as others do. Oh my goodness, it’s a handsome beast: no wonder it’s a magnet for visitors. 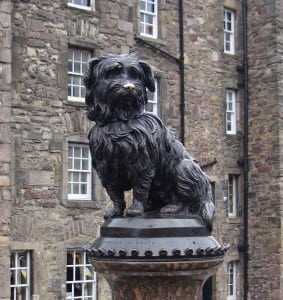 On our first afternoon one of the first things we spied was the statue of Greyfriars Bobby, a faithful Skye terrier who became famous in Edinburgh in the 19th century for staying with his master’s grave for 14 years after he had died.  In the churchyard you can see headstones for both Bobby and his master, Auld Jock.

Later that day we had a date with some woolly mammoths, at a special exhibition in the National Museum of Scotland. The museum itself is a joy for families, not least because it’s free. Meet a life-sized Tyrannosaurus Rex skeleton, peer at Bonnie Prince Charlie’s silver travelling canteen or marvel at Dolly the sheep, the world’s first cloned mammal. ‘Mammoths of the Ice Age’, although requiring an entry fee, gave us the chance to meet an exact replica of Lyuba, a baby mammoth that was perfectly preserved in the mud in which she had died nearly 42,000 years ago. Incredible.

Next on the tourist trail was the Camera Obscura. Two treats in one, this attraction has five floors of zany optical illusions and is topped by a special rooftop show, the oldest purpose-built attraction in the city, where live images are projected onto a large circular dish via a type of giant periscope. As the lens shows members of the public wandering around outside Edinburgh Castle, here within this darkened Victorian chamber children are given the power to ‘pick up’ people and then flatten them with a piece of card or create bridges with folded paper so real cars appear to drive over them.
On other floors, a mixture of bendy mirrors, holograms and magic tricks provide children and adults of all ages with the opportunity to have loads of fun. When we were visiting, a group of elderly ladies had a go at the ‘disappearing body’ illusion (see photo below right): their shrieks and giggles were so infectious, they had the whole room helpless with laughter.
Having admired the view over the rooftops, a visit to The Real Mary King’s Close gave us a fascinating glimpse into the warren of streets underneath The Royal Mile, frozen in time since the 17th century. Taken on a tour by a knowledgeable, costumed guide (we had an excellent ‘merchant’), we learned about the lives of people who had lived there. An enjoyable hour full of anecdotes about murder, the plague and sewage.
Our final morning in Edinburgh, heading home, and we had a choice. We could either visit the Rosslyn Chapel (any Dan Brown Da Vinci Code fans will know why there is a renewed interest in this tiny church) or the Royal Yacht Britannia, a home to The Queen and the Royal Family for over 40 years. We took a vote and Britannia won. I had voted for Rosslyn Chapel so had mixed feelings when we drove to Leith, picked up our audio guides and joined the ship. I needn’t have worried; this was a brilliant experience. There was just the right amount of history, maritime information and royal gossip to keep all four of us entertained for an hour or so. Favourite bits? The Queen’s very small single bed in her rather simple bedroom, the laundry room (and why I wouldn’t have wanted to work there) and the Officers’ Mess where they used to play a game called Wombat Tennis, using a ceiling fan to propel a toy marsupial into the air.

There was so much more we could have seen in Edinburgh: Holyrood Palace, the zoo, the Royal Botanic Gardens, Georgian House… In the short time we were there we tried to keep a balance between being a tourist and just soaking up the atmosphere. On one afternoon we chose Harvey Nichols over Edinburgh Castle (sacrilege!) then, after a satisfying browse, sat watching the world go by in St Andrew’s Square, which was carpeted in thousands of small light-bulbs, an installation created by Bruce Munro for the Edinburgh Science Festival.

As we sat, we watched the smart new trams gliding past:

“It’s a travesty!” announced my shocked husband, “All that money spent on the new trams and no-one is using them!”

We later discovered that the trams are currently being tested without paying customers: they aren’t being officially launched until May. Oops. Another reason to come back soon to Dougie’s home town, to try out the new transport system. Oh and I’m also coming back to see the Rosslyn Chapel. Plus, I’ve never been to the Festival.

All of which makes me wonder, why did my husband ever leave?

Our trip was arranged by VisitScotland. We were given passes for all the attractions requiring an entry fee. For more information on holidaying in Scotland go to: www.visitscotland.com

National Museum of Scotland
Chambers Street, Edinburgh +44 (0)131 225 7534
Free Entry
Trish’s Top Tip: If you’re visiting this summer, look out for the UK’s only showing of the special exhibition, Ming: The Golden Empire, from 27 June to 29 October 2014.


Camera Obscura & World of Illusions
Castlehill, The Royal Mile. Edinburgh +44 (0)131 226 3709
Adults £12.95, children 5-15 £9.90
Trish’s Top Tip: Take time to use the free telescopes in the rooftop to look at the views of Edinburgh. If you want to stagger your visit, you can always get your hand stamped and return later in the day.