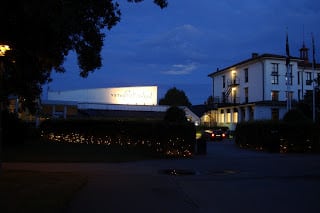 We had planned to do lots of sightseeing from our final stop, Ystad. I had booked four nights in my splurge hotel of the fortnight, the Ystad Saltsjöbad, and it was so fabulous, and the weather so gorgeous, we felt the lure of the swimming pool, the beach and the bar: sightseeing went out of the window to a large extent. Certainly a day trip to Malmo was axed: one to do on another visit perhaps?

I don’t think Dougie knew quite what had hit him when we drew up and saw this fairly large hotel complex, situated right on the beach just outside the town of Ystad. The bedrooms, to be fair, were quite functional and on the small side, but the public rooms were just heavenly, oozing comfort and style.

“How much are we paying for this?” he squeaked.
“Never you mind, love. It’s on the credit card, we can pay for it in September.”

Breakfast was sumptuous and could be taken on the terrace or in the large, smart dining rooms. There was the usual fare of fruit, cold meats, cheeses, croissants and cereals, but we had a feeling they were catering for a rather choosy clientele when we spied a large selection of vitamin tablets next to the jugs of fruit juice.

The Ystad Saltsjöbad is a spa resort and everyone was wandering around in white dressing gowns and slippers. We didn’t bother booking any spa treatments. I think I’ve said before on my posts I’m not very keen on being massaged and fiddled about with. Maybe if the weather had been cold, I could see the benefit, but when you have the sun beating down outside and a willing husband with a bottle of Ambre Solaire, there’s no contest. The spa brochure was interesting as always, once I’d realised that the Swedish word ‘behandling’ means ‘treatment’ and not some kind of  stress relief ‘extra’.

We often took lunch by the pool but, after our morning in Ystad town, we decided to drive back via the supermarket to get a few things for a picnic lunch back at the hotel. We chose rolls, ham, tomatoes, and stocked up on drinks and crisps then I sent Dougie off to see if he could find a small pack of butter. Back in the room he opened the little pack of butter, only to find a lump of something grey and smelly. Turns out he’d picked up some yeast. Nice.

Back at the pool, I tried to read my book but found myself people watching. There were lots of family groups but a fairly large contingent of conference chappies who were let loose from about 4pm and then proceeded to leap into the water, doing Peter Kay’s ‘top bombing’, with some very impressive expense account pot-bellies.

We were very lazy in the evenings too, preferring to eat in the hotel restaurant rather than drive into town. The food was delicious: great steaks, fish and yummy puds like a rhubarb and strawberry compote with cinnamon cream and cardamom crumble served in a Kilner jar. All washed down with a cocktail or two and accompanied by a jazz quartet and a nice fleecy blanket to keep the evening chill at bay.

I could get used to this. 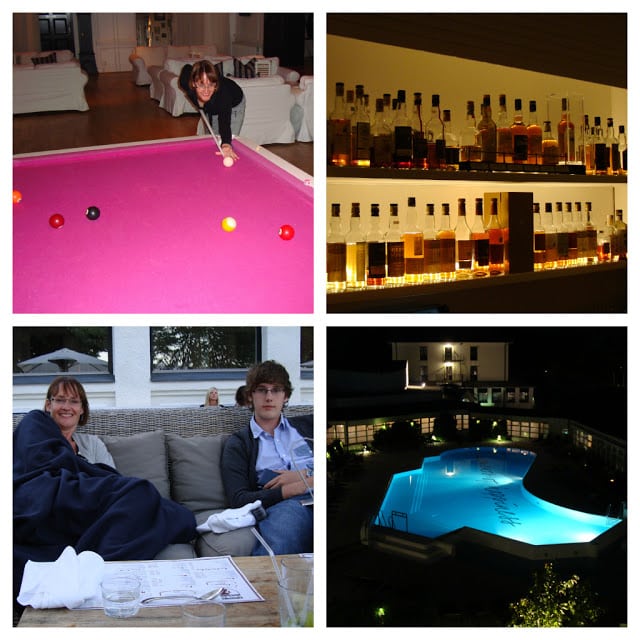