“It’s undisturbable the peace we found
In a bright new space up above the clouds…
…you and I forever, baby, lifted, lifted…”
Lifted, Lighthouse Family, 1995

I was pregnant with Rory when the Lighthouse Family released their first album, Ocean Drive, in 1995. I remember playing the CD, listening to the opening track, Lifted, and holding my bump. I was brimming with hope and happiness that our longed-for child was soon to join us.

The song, and the memory, came flooding back quite unexpectedly on a trip to Karlsborg, on the western shores of Lake Vattern. The town is famous for the large fortress which King Karl XIV ordered to be built in 1819 on the Vanas peninsula as a place of safety for the royal family and the government. This was at a time when the country was jumpy about its national security. By the time it was finished, 90 years later, it had become outdated: it wasn’t needed as a war fortification so functioned as a training and storage facility instead.

A major tourist attraction, most visitors head for the main square and sign up to watch a reconstruction of life in the 1860s, complete with stunt men and special effects. We decided not to join the others and, instead, chose to make the most of the hot weather that day by exploring the lake path which stretched beyond the walls. We walked and chatted and played silly games with fallen pine cones, seeing who could hit a specific mark on a tree. No-one else was about.

As we ambled on, we suddenly spotted the most beautiful lighthouse a few feet away from the path with a wooden jetty leading to it. Vanas Lighthouse, built in 1892, constructed of wood and surrounded by rocks and grasses and wild raspberries. It took my breath away.

We spent a long time in our secret place, enjoying the sun, listening to the water slap against the rocks and letting time slip by. It was a moment which captured the essence of Sweden: peace, beauty, water and space. And it was a moment when, as a family, we shared something perfect. I shall never forget it. 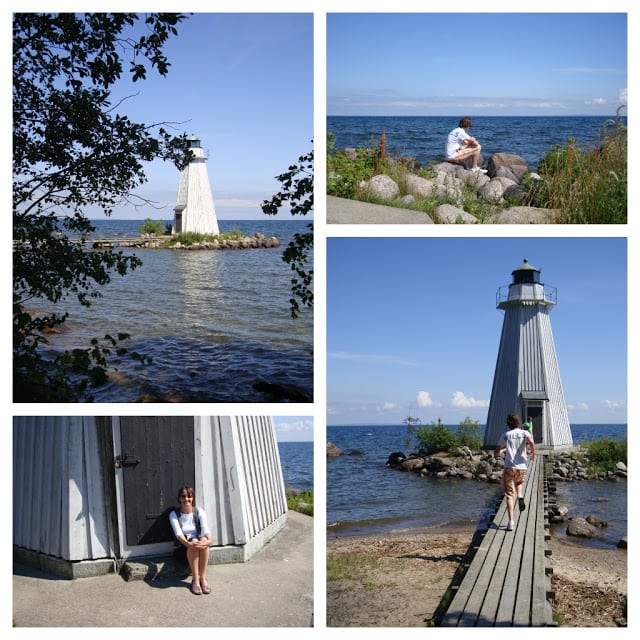