“Have you got the paper counterpart to your driving licence?” I asked Dougie.
“No, I don’t have one.”
“What do you mean, you don’t have one?”
“When I lost my old paper licence a couple of years ago, they sent me a credit-card type licence but nothing else.”
“Are you sure? It says here on the Hertz rental agreement that when we pick up the car tomorrow we need both parts.”

This conversation began calmly enough on our final night in Stockholm, prior to hopefully picking up our rental car to continue our journey through Sweden. A few hours later, as panic reached fever pitch, we had googled everything under the sun concerning driving licences, the DVLA and how likely it would be that the authorities in Sweden would insist on both parts because, despite my dear husband’s protestations, he should indeed have a paper counterpart and it was likely to be in a drawer back in the UK. Everything had been booked in his name so although I had my driving licence, we were hoping to only have to use me as a named driver in an emergency.

We approached the Hertz desk in Bromma airport, after a swift but rather subdued taxi drive, with a list of DVLA telephone numbers, in case it all kicked off and we would need confirmation that the fool I was married to could be trusted with a car. A very relaxed young man came to the counter, we handed over the licence, he said thank you, here’s the keys. Not a dicky bird about bloody paper counterparts which had kept us awake and feeling slightly nauseous all night. 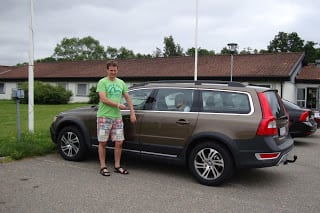 With a skip in our step we scarpered quick to the parking area to pick up our Volvo XC70 diesel which we nicknamed The Big Brown Bear. What a difference from the heap of junk we had last year in Portugal. It had only done a few hundred miles, it was clean, spacious and, according to Dougie, a real pleasure to drive.

The journey to our next stop was effortless. The roads were well-maintained, quiet and the Swedes drive carefully so no-one is up your backside, wanting to overtake. After a couple of hours we reached Askersund, a pretty resort on the very northern tip of Lake Vattern. We were staying in the Hotel Norra Vattern, a Best Western hotel I had chosen because of its perfect location next to the harbour. What I didn’t realise was that the hotel was situated between the lake on one side and a Shell petrol station on the other. Keeping the costs down (how unlike me!) I hadn’t opted for the superior rooms, which doubtless would have been on the lakeside. Those rooms had been decorated in nautical theme. Our rooms, with views of the trucks sitting with their engines running, were perfectly fine and clean, but did have a strange decor.

Take a look at the photographs below and click on the one furthest left. The words on the wall say, “Quiet your mind, open your heart, extend your hand, love with everything you’ve got”. Now I’m all for loving with everything I’ve got but I’m going to be hard pushed with twin beds and that bloke in goggles staring down at me. And what about the extra blanket fastened to the wall with an over-sized peg? But I did love the chair. In fact the room shouted, “Chocks Away!”

Askersund was very different from Stockholm. In the capital we were aware of the beautiful people and Rory kept wanting to go to McDonalds because the staff were all gorgeous blonde girls, pony-tails swishing as they handed over their sweet chilli chicken wraps. Here in Askersund were all the normal folk: the families, the elderly, the beer bellies. All layers of society, in their shorts, sunburnt and on holiday. It felt like home. The weather was gorgeous so we sat by the lake, eating huge ice-creams and watching the Swedish equivalent of our boy racers cruising in and out of town in their clapped out old Volvos, with lowered suspensions scraping across the ground. As there had been a local classic car rally here a few days earlier, there were also some fabulous vintage American cars purring past. It felt like a scene from Back to the Future. I was just waiting for Doc Brown to come into view and fix some wires to the old town clock in the square.

That evening, as the sun was setting on an eventful day, I whipped out the iPad to check the weather for the coming week.

“Ooh it’s 26 tomorrow,” I announced, to happy smiles from husband with beer in hand.
“Oh and it’s 27 the next day, and 28 the day after that.”
“Fantastic”, replied Dougie, “That’ll do nicely”
“It gets better! 29 and then 30 by the end of the week! It’s going up every day.”
“Does it plummet to 1 next Wednesday?”
“Blimey, yes it does!”
“Then I think you’re looking at the dates, love, not the temperatures.”