A few weeks ago Harriet at Is There a Plan B? reviewed a book called Making Babies as part of the new Tots 100 Book Club. The book club is in association  with Tesco. The idea is to review a favourite book and suggest another blogger you feel would appreciate it. Tesco then sends that person a copy of the book.

Harriet suggested I read Making Babies as she thought it would be interesting to hear how a mum who had a baby some time ago could relate to the book. Would I be more dispassionate because my own son was no longer a baby? Tesco have sent me a copy of the book, which I have started to read: will let you know in due course. 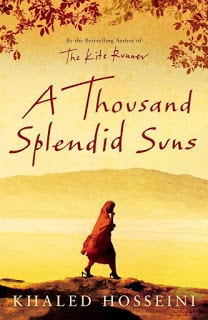 In the meantime, to complete my side of the bargain, I have to review a book which has made an impact on me within the last year. My choice is A Thousand Splendid Suns by Khaled Hosseini. I had read Hosseini’s previous book, the best-selling The Kite Runner, and found it to be an enlightening, emotional story which provided me with an insight into the difficult history experienced by the people in Afghanistan.

Whereas The Kite Runner focused on the relationship between two young boys, Amir and Hassan, A Thousand Splendid Suns takes a female perspective on the turbulent events in Afghanistan from the 1960s through to 2003. Mariam and Laila’s lives become intertwined and despite their struggle with violence, oppression, poverty and fear, it is their friendship which provides them with the strength to endure and fight back.

Despite what you might think, the novel isn’t hard to read. The historical and political references are clearly explained within the context of a supremely uplifting narrative. What I also found fascinating was how little I really knew about Afghanistan and the political turmoil it has endured. Although we see in the news how oppressive the Taliban regime is, Hosseini demonstrates how previous ruling governments were no strangers to brutality. The end of the Soviet occupation was welcomed by the Afghans who saw the victorious mujahideen as freedom fighters. How quickly infighting spread and the country was once again a war zone.

It wasn’t difficult to choose someone I thought would appreciate a copy of this book. Kelloggsville is currently recuperating after a back operation and, although she is desperate to be up and about exercising again, she knows she has to take some proper rest. So I’m hoping she will be diverted with a good book. Kelloggsville, as many of you may know, is a keen guider, a mentor of young girls in their Brownie and Ranger packs. She will understand more than most the importance of young women having a voice in society, feeling valued, possessing high self-esteem. The story of Mariam and Laila may be a fictional account but the context is real and true. In A Thousand Splendid Suns we see the individuals behind the burka. Hosseini has given the Afghan women their voice.

If you would like to try the book for yourself, it’s available from Tesco: A Thousand Splendid Suns, Khaled Hosseini