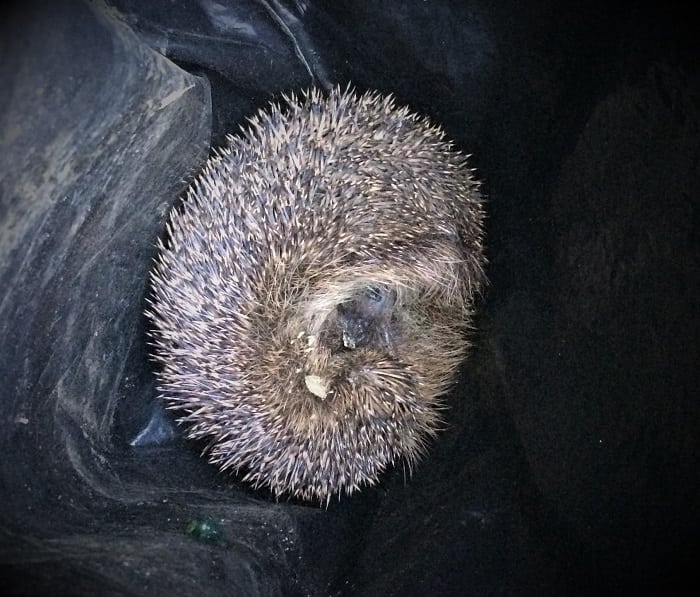 Our sleepy, prickly friend was found curled up in an old plastic bag in our garage at the end of April. We couldn’t understand how it had managed to sneak in and we had no idea how long it had been there. I did some research and discovered hedgehogs usually hibernate until March or April. Had ours been in the garage for some time or had it woken up and shuffled in, searching for food?

A quick internet search revealed Dowsdale Hedgehog Sanctuary which is located about 20 minutes drive from us, near Peterborough. I rang the contact number and they called me back. Help was at hand. First we had to weigh the little creature to see if it was under-nourished. Anything less than about 600g might need some assistance. We carefully placed our hedgehog onto a towel and popped him on the kitchen scales. About 450g. The advice was to put the hedgehog in a high-sided box and allow it to continue sleeping. The sanctuary offered to pick it up later on in the afternoon and take care of it for us.

In the intervening hours we became very fond of our little pal. Dougie decided to call him Stuart after the Scottish rugby player, Stuart Hogg. We kept an eye on little Stuart or, as I now called him, Stuart Little. His rescuer came at tea-time and we waved goodbye to Stuart, sending him on his way with some money so the charity could provide him with his board and lodgings.

A few days later we were sent an update about Stuart’s condition. She was doing well. She? Oh Stuart, you’re a little lady! She had been given some fluids as she was a bit dehydrated but she was eating properly. Of course now we had a dilemma: we needed a new name. Dougie decided, if she couldn’t be Stuart, then why not call her Mary Stuart. Our little queen had been locked up in a prison but now she was rescued, ready to fight another day, unlike her unfortunate namesake.

As we were due to go on holiday that weekend, it was a relief to know she was in good hands. The plan was for Mary to be looked after and, when she was the right weight, we could pick her up and release her back in our garden, in her home environment.

Mary’s little spa break at the sanctuary lasted for just over a month. In that time she was treated for worms, sprinkled with flea powder and fed like the Queen that she is, until she was a good weight for release back into the wild. We collected her from the sanctuary earlier this week so that we could set her free in our garden. We thought she probably had some friends waiting for her, going by the little deposits I’d seen all over the lawn.

How did Mary enjoy her little holiday? By all accounts, she had a marvellous time though I was told she is a messy girl and she often disgraced herself by frequently pooing in her water bowl and knocking the bowl over. Oh Mary!

She was fast asleep as we drove back home and we were told to wait until after 8pm before releasing her. In the meantime we left her in her box in the utility room. Bang on time, Mary woke up around 8pm: we could hear shuffling and she had obviously already left us a present as the smell from the box was very strong. We couldn’t get into the garden quick enough. I removed the shredded paper and laid the box on its side. No movement. We tore off two sides of the box; Mary was curled up in the corner, not looking at all keen on coming out to play.

Eventually, with all four sides of the box laid flat, she hesitantly made a move, stepping on the special biscuits which had been left in the box for her ride home. Progress was initially slow as she walked on the grass but then, after a few more steps, something clicked and she scuttled off at speed towards the bushes at the back of the garden, diving underneath them.

I was curious about Mary and what was likely to happen to her. As she is about two years old, she is able to have babies and with the mating season in full swing at the moment, she has some time to make up, which might explain her speedy dash to the undergrowth. The male hedgehogs will be keen to show off to Mary; she may even have a couple of suitors fighting over her. In that respect, our Mary Stuart isn’t that different from the original.

I’m so grateful to Dowsdale Hedgehog Sanctuary for looking after Mary. If you need any advice on hedgehogs, have a look on their website. Through them I’ve learned a lot about hedgehogs, their habits and what to do if you find one during the day when they ought to be sleeping. There are a number of ways to support the charity, including donations of items such as towels and food.

So we say goodbye and good luck to Mary, Queen of Hogs. Here’s to a long and happy life. 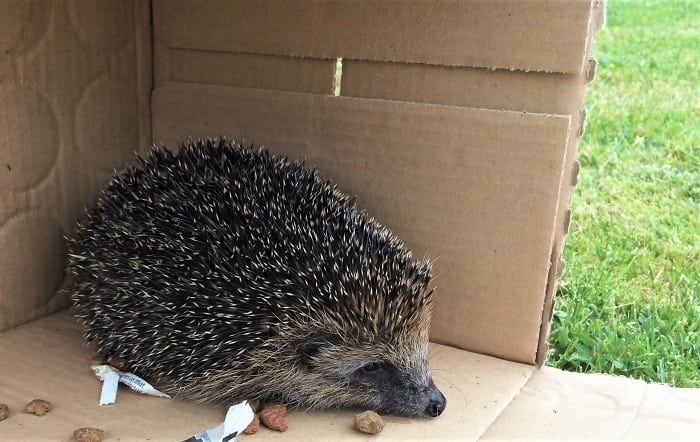